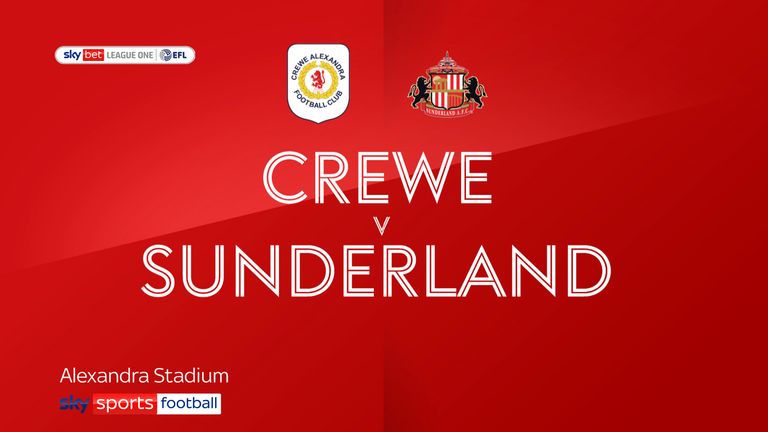 Ross Stewart struck twice for Sunderland as they won 4-0 at Crewe to move up to second in the table.

An own goal by Terell Thomas helped Lee Johnson's side on their way at Gresty Road and substitute Leon Dajaku completed the rout.

Early on, Crewe were indebted to goalkeeper Will Jaaskelainen for two smart saves which thwarted Tom Flanagan's set-piece header and Alex Pritchard when the midfielder got clear.

Scott Robertson and Kane Ramsay went close with driven efforts for the Railwaymen, but Dave Artell's side looked suspect at the back - although the first goal in the 25th minute came in rather fortuitous circumstances.

When Pritchard played the ball across the box from the left, Thomas sliced his clearance beyond Jaaskelainen and into the far corner.

There was no doubting the quality of the Black Cats' second in the 32nd minute as Dan Neil teed up Stewart with a cross from the byline and the striker found the corner of the net with a firm header.

Stewart got his second on 55 minutes after Pritchard's corner was flicked on at the near post by Callum Doyle.

Former Sunderland striker Mikael Mandron almost cut the arrears as he scooped the ball towards the far corner from a tight angle but it was kept out by Ron-Thorben Hoffman.

And Sunderland got a fourth goal in the 73rd minute when Neil released Dajaku, who raced clear down the left and drove under Jaaskelainen.