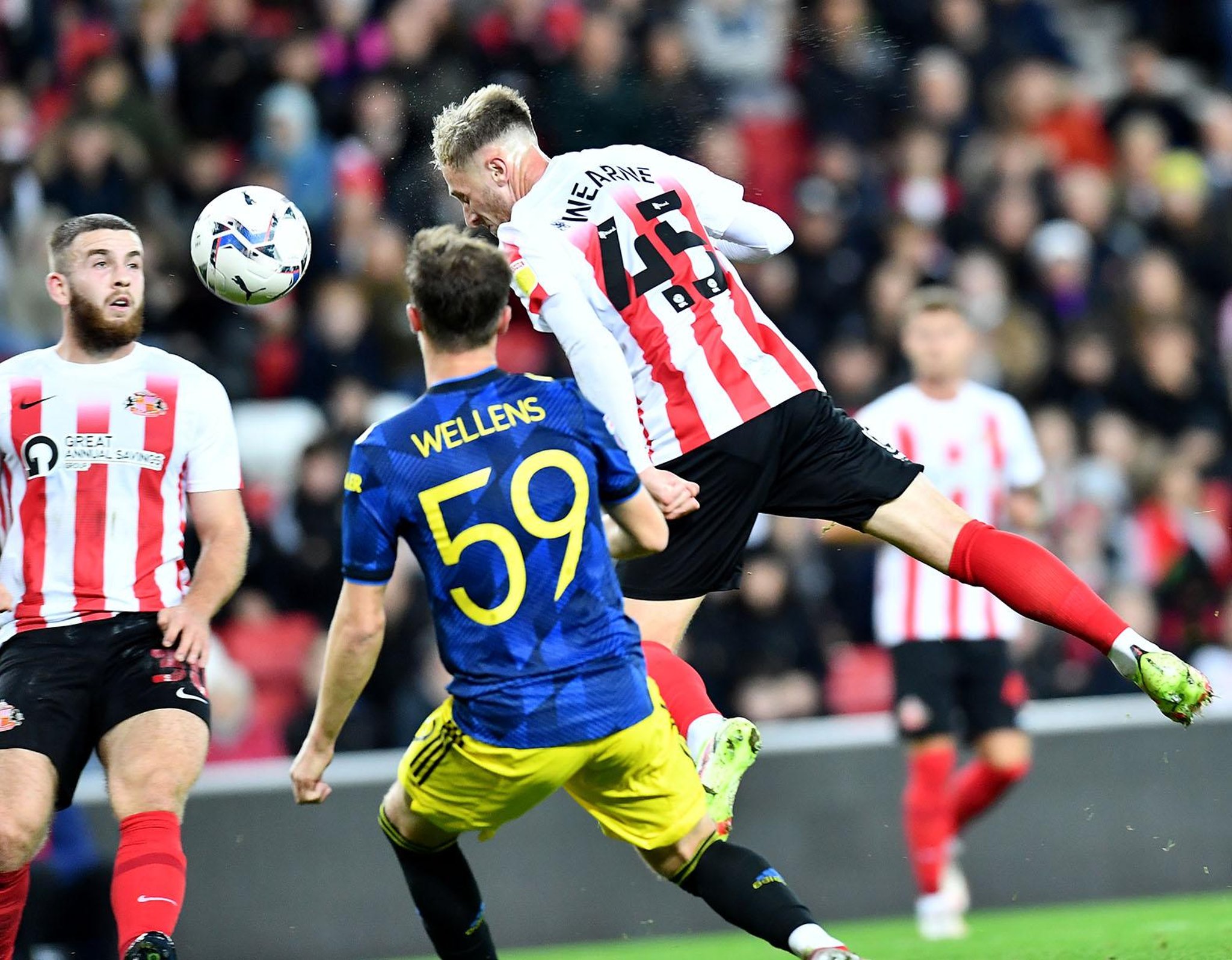 Stephen Wearne scores his second goal in a week for Sunderland

Tyrese Dyce and Stephen Wearne scored either side of Zidane Iqbal’s stunning strike to ensure the Black Cats’ progression with a game to spare in their group fixtures.

An impressive achievement, given the profile of the side fielded in the opening two games, with another seven senior debuts handed out over the course of this game.

Not willing to risk any players ahead of a crucial run of league fixtures, Johnson fielded a side that aside from Denver Hume was made up exclusively of U23 players, and one that is likely to yield a fine of up to £5,000 from the EFL.

They started brightly, but survived a major scare when Joe Hugill also marked his Wearide return with a goal on his first touch.

Hume had done well to race to the loose ball when United countered from a corner, but didn’t see the runners over his shoulder and as such the backpass was underhit. Hugill went round Carney but from a tight angle hit the post. The loose ball fell to Hoogewerf who looked certain to convert, but the winger lost his footing at the crucial moment.

It was a rare lapse in a strong start from Sunderland, whose aggressive press was regularly catching the visitors out.

They went close through Wearne and Harris, and almost had the lead when a dangerous Ellis Taylor cross fell for Kenton Richardson, whose effort stuck the far post.

There wasn’t a huge amount between the teams but the hosts looked comfortable on the ball, and went close when Hume spotted a poor throw out from Dermot Mee in the United goal. He made the interception and drove into the box, but his low effort was easily saved in the end.

Moments before Harris had headed over a good cross from Hume, who looked a threat going forward.

The visitors finished the half the stronger, Hoogewerf particularly influential out on the right. He saw an effort deflected just over the bar by Hume, before his effort from just inside the box was brilliantly blocked by Ollie Younger. Zidane Iqbal met the rebound, his effort hitting the far post with Carney well beaten.

Both sides traded efforts at the start of the second half as the tempo lifted, and a lift in Sunderland’s press quickly drew the opener.

Harris leapt on a poor backpass under pressure and drew a good save from Mee, before Dyce met the rebound and fired into the roof of the net.

The visitors had looked unsettled but a moment of individual brilliance got them level within ten minutes. A corner fell for Iqbal on the edge of the area, and the midfielder curled a stunning effort into the far corner.

The Black Cats were fortunate not to fall behind as they lost their way, Hugill and McNeill both spurning good openings as they raced through on goal.

It was an open contest with both sides threatening, and it was the hosts who reclaimed the advantage with an excellent team move.

Almond brought the ball out of the defence and with no challenge forthcoming, stepped forward and slid Taylor in the down the right. His cross was inch-perfect, finding Wearne in the middle of the box and Mee had no chance of saving his firm header.

The game continued to swing from end to end, the impressive Carney having to make a fine save from Mather’s effort from a similar area to where Iqbal had scored twenty minutes earlier.

Having survived that dangerous effort the Black Cats steadied, and were able to see the game out with relative ease as United pushed for an equaliser without ever really forcing Carney back into action.