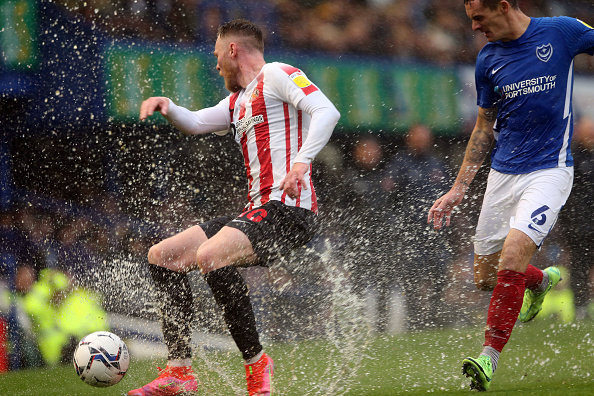 Sunderland suffered a massive 4-0 loss away to League One rivals Portsmouth in what was one of the biggest shocks in the EFL this weekend.

Ths south coast side have not won a match since mid-August. Yet Portsmouth were on form on Saturday as Pompey obliterated Sunderland 4-0 at Fratton Park.

Danny Cowley’s side went into the break 3-0 up as the Black Cats struggled to contain Portsmouth, who were up for a fight and eager to secure three points.

The result saw Sunderland drop down to second in the League One table as Wigan leapfrogged them in the standings after their 2-0 win away to Gillingham.

Indeed, it was a day to forget for Sunderland, yet fans on social media believe that the Portsmouth weather played a huge role in the outcome of the match.

Severe rain has battered most of the United Kingdom this weekend, with the south coast naturally seeing the worst of the torrential downpour. And Fratton Park at times resembled a water park more than a football stadium.

Of course, excuses like this can be viewed as weak from opposing fans. But a case could be made that the heavy rain was key to Portsmouth beating Sunderland by such a large margain.

Embarrassing! I expected so much more, especially in the second half when we were kicking towards the shallow end.

Some photos from today’s game for those interested pic.twitter.com/6TSYptbBqI

Bad day at the office, poor conditions that they adapted to better. These things happen, let’s move onto the next one and get back to winning ways.

Dunno what everyone’s complaining about tbh the pitch doesn’t look too bad from this angle pic.twitter.com/Q6LMaTR44Z

Bad performance, bad pitch, still in the top 2 though, heads up and move on from this

In other news, ‘A bit crazy’: Jack Wilshere tells Arsenal fans inside info about 23 y/o Gunner