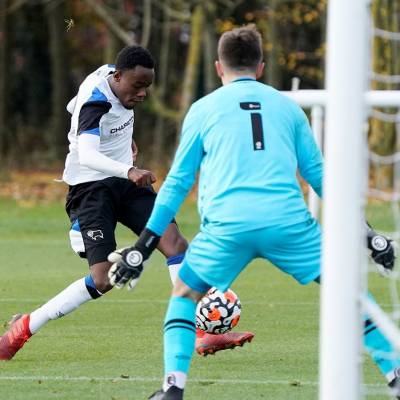 Derby County Under-18s put in a complete performance to secure their first home win of the season, with a 2-1 triumph over Stoke City at Moor Farm.

Malcolm Ebiowei scored a brilliant free-kick in the first half, and Sam Sebagabo scored the crucial second goal as the young Rams held off a late surge from the visiting team to secure all three points.

The Under-18s started the game at an incredible pace, with forward Cian Kelly leading a high press whenever Stoke tried to play out from the back.

Ebiowei had a brilliant first half for the young Rams, scoring the game's opening goal, which was all his work. The midfielder received the ball in a forward position, driving towards the edge of the box and winning a free-kick, which he converted expertly into the top left corner.

Robinson's side did well not to let any complacency creep into their game after grabbing an early goal, continuing the forward press and defending compactly when the visitors progressed the ball forward.

Most of Derby's attacking work in the first period came down the left-hand side, with goalscorer Ebiowei, Reece Nicholas-Davies and Ola Ibrahim all linking up well on several occasions to crosses into the Stoke box.

The hosts had a great chance to double their lead at the end of the half, which started down the left as Ibrahim burst into an open channel and played a delicately weighted through ball into the path of Kelly, who could not quite get the ball under control as he ran through on goal.

Overall, it was a positive have for Robinson's team, with the three-back formation operating well on both ends of the field. The visitors struggled to create many goalscoring opportunities and deal with the overloads out wide that Derby's system made.

With Derby in control of the game but only leading by a single goal, they came out with the same poise and purpose in the second half as they showed in the first and were duly rewarded for their persistence.

Kelly had a couple of chances to grab the second, just missing crosses from Ebiowei and Nicholas-Davies before Sam Sebagabo grabbed the all-important goal with a composed first touch and finish from a ball over the top of Stoke.

The hosts continued to dictate the game's tempo, and with a two-goal lead their confidence was not suffering – Ebiowei led the charge for more goals with some brilliant solo runs, one which forced a great save from Connor Robson the Stoke goal.

Sebagabo forced another save off Robson before Stoke were forced to flick the switch and push forward more to get back into the game. The Under-18s settled into a more defensive shape to defend their lead and conserve energy, which invited visitors to attack.

Stoke pulled a goal back in stoppage time as Jack Griffiths ran through on goal and slotted the ball under Harvey Randle, who was a spectator for most of the game, increasing the pressure in the final seconds.

Derby held out in the end for the first home win they craved in a game that showed clear signs of progress in the newly-integrated 3-5-2 shape.