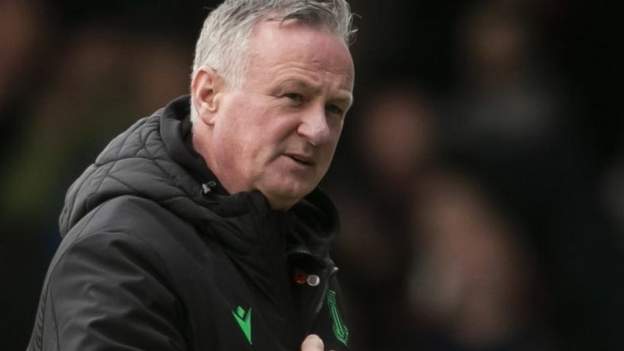 This time two years ago, when Michael O'Neill left the world of international management with Northern Ireland to return to club football at Stoke City, the Potters were in a bit of a mess.

Just 18 months on from being relegated after 10 straight seasons in the Premier League, Stoke were bottom of the Championship.

O'Neill was also their fifth manager in under two years - a remarkable turnaround in patience from a board who had shown almost total faith in just two first-team gaffers in all their time in the top flight, Tony Pulis and Mark Hughes.

But, while it simply did not work out for Paul Lambert, Gary Rowett or Nathan Jones, O'Neill is now making a very decent fist of it.

Following Hughes' departure after almost five years at the helm in January 2018, coming on top of Pulis' long reign, the once seemingly secure manager's office suddenly almost seemed to require a revolving door.

Stoke's final days in the Premier League were seen out by Lambert, who had 123 days in charge. Rowett then lasted 232 days and Jones not much more, with 304.

But, after two years of sound planning, solid thinking and careful squad trimming within revised budgets under O'Neill, Stoke are in a lot happier place.

They now sit fifth - and, although already 10 points adrift of an automatic promotion place and having lost their best player Nick Powell to injury, they still look a sound prospect to make the Championship play-offs.

Instead of eight points from 15 games as they were when O'Neill arrived in November 2019, they have eight wins from 17 games.

"It's all about perspective," O'Neill said after Saturday's 1-0 win at his Potters predecessor Jones' Luton. "But we're growing in confidence all the time.

"We've just come off the back of a second 1-0 away win in a week. That's not easy to do in this league."

Admittedly, it comes as no surprise to see Stoke doing so well now that crowds are back in grounds.

The very first day he took charge, the travelling Potters fans roared their side to a 4-2 win at Barnsley - and they were winning comfortably more than they were losing until the Covid-19 pandemic struck and robbed the Potters of one of their main weapons - their crowd.

This season, with that vociferous crowd back behind them, it has mostly been a different story.

Five straight home wins to start the season, followed by a Friday night victory against then leaders West Bromwich Albion lifted Stoke to third in the table, within a point of top spot.

There have been wobbles since - four straight defeats which included the loss of their most influential player Powell with a cracked shin bone in the home defeat by Bournemouth. They have also now been hit by a knee injury while on international duty for Australia defender Harry Soutttar.

They also discovered this week that chief executive Tony Scholes is to leave after 18 years - to return to the Premier League quicker than the Potters.

"There has been a big turnaround, the squad is a lot smaller in numbers and obviously the age and financial profile is different than when I arrived. At one point, we had something like 12 players out on loan. The majority were big earners but window by window, you try to change that situation.

"We're stable and we've got a really good ownership model."

Mark Cartwright, Stoke's head of recruitment from late 2012 until 2019, agrees the Coates family-owned club are still only looking in one direction.

In an interview with BBC Radio Stoke last month, following this summer's appointment as the United Soccer League's first sporting director, Cartwright said: "The Coates family are 100% committed to getting the club back to the Premier League, not helped by the crazy rules around FFP that restrict them.

"If they could, they would invest whatever it took.

"They are Stoke people. They want the academy to work and to bring through their own players but they want the first team to be a success. Nobody should ever question their commitment."

Following criticism that came Stoke's way in the wake of some of their more questionable purchases in the latter years of their Premier League days, he also answered the question of where the buck stops on new signings.

"There could be a list of players who have been presented to him or he could bring a player to the table himself. But it's the manager who says, 'this is the player I want'."

The work that Michael O'Neill has done since his appointment has been nothing short of remarkable.

Not only did he keep Stoke in the Championship when relegation looked nailed on, he's reduced a bloated squad quickly and effectively.

There is no doubt the club has progressed in the last two years and this is fundamentally down to Michael O'Neill and his backroom team.

The team is still a work in progress, but the evidence is there for all to see that the club is again heading in the right direction.