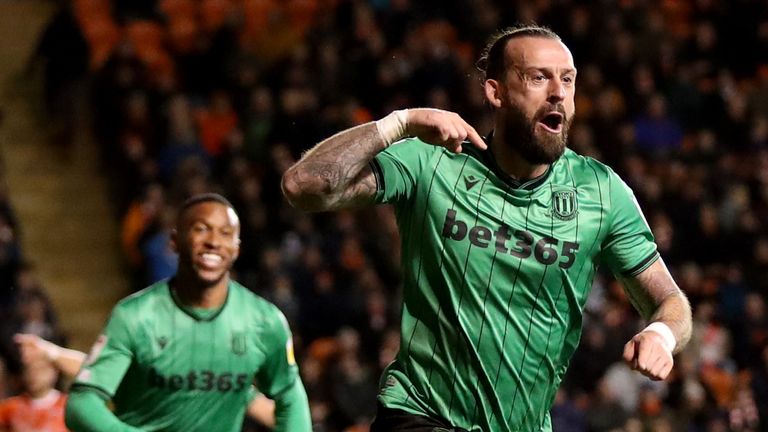 Steven Fletcher pounced with a late close-range finish to hand Stoke a hard-earned 1-0 win at Blackpool.

Fletcher's third goal in two games secured the visitors a first victory in five and lifted Michael O'Neill's men back into the Championship play-off places.

Blackpool's run of three straight wins was halted and the club could be in trouble with the Football Association after at least one missile was thrown on to the pitch in the dying minutes.

Looking for their first win in a month, the Potters started the brighter at Bloomfield Road.

Fletcher saw an early effort deflected off target, while skipper Joe Allen blazed disappointingly wide from just outside the box.

Losing veteran centre-back Richard Keogh to a 15th-minute injury did not help the hosts but they ought to have opened the scoring two minutes later.

By the half-hour mark both sides continued to probe for a clear opening, though there was little to choose between two well-matched teams.

There was soon another opportunity for Yates but his positioning meant he could not direct a header from Jordan Gabriel's cross towards goal.

It proved to be a rather scrappy final few minutes of the first half, with the Potters not helping their own cause with a flurry of deserved yellow cards.

The Seasiders made a sprightly start to the second period and Demetri Mitchell charged towards the heart of the Stoke defence only to see his 20-yard strike deflected into the grasp of grateful goalkeeper Joe Bursik.

The game was very much in the balance with a top-six place potentially up for grabs but too many mis-placed passes continued to disrupt the flow of proceedings.

Fletcher was proving a handful for the Blackpool rearguard and he lashed a curling shot straight at Dan Grimshaw.

The hosts' keeper then saved smartly from Jacob Brown after Fletcher this time turned provider.

Both sets of supporters were doing their vociferous best to rally their respective troops but there was still no breakthrough heading towards the three-quarter stage of the game.

Blackpool substitute Gary Madine closed in on goal in the 75th minute but an assistant's flag curtailed hopes of any celebrations even before he'd attempted to slot into an unguarded net.

And it was a Stoke substitute who had a key role in the deadlock finally being broken four minutes later, Mario Vrancic playing a pivotal part with his first touch.

He floated in a free-kick from close to the centre circle, Harry Souttar volleyed towards goal, and as the ball bounced back off the post, Fletcher was on hand to bundle home the winner.