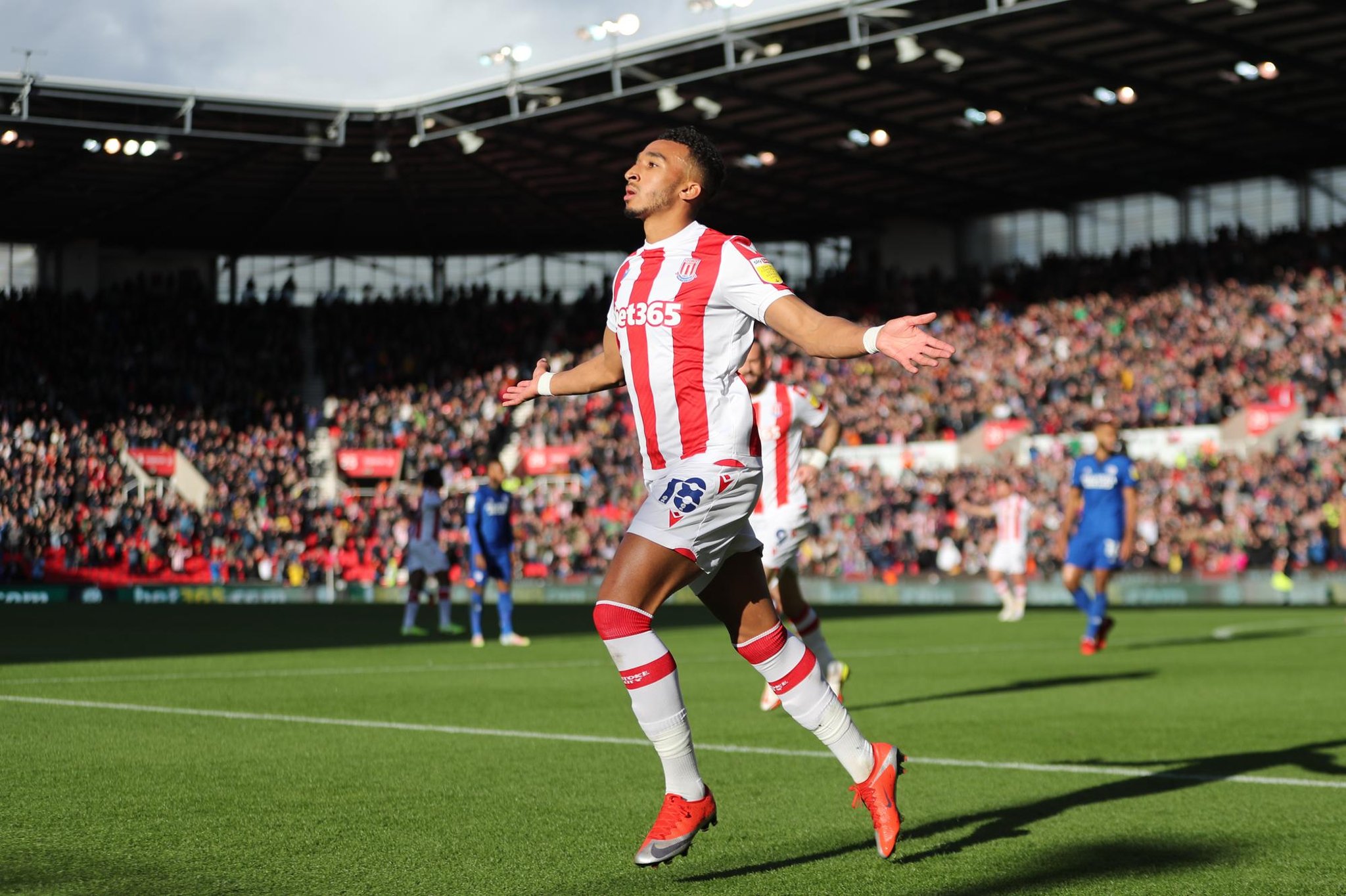 The pair play up front for Stoke City in the English Championship and were both on the scoresheet in Saturday’s 3-3 draw against Cardiff City.

This was the 23-year-old Brown’s fourth league goal of the season and Clarke is confident the Halifax born striker can make an impact at international level. Fletcher certainly did while scoring ten times in 33 appearances across ten years. Clarke took the view that if Brown has impressed his veteran strike partner then he really must be worth considering. The manager is looking for someone to provide striker back-up against Moldova next Friday as Scotland seek to secure the three points they need to claim a World Cup play-off place.

Lyndon Dykes, who has scored in each of Scotland’s last four games, is suspended and Che Adams is expected to lead the line in his absence. Dykes is free to return for the last group game against Denmark three days later and is included in the 25-man squad.

Steven Fletcher wheels away to celebrate after scoring v Poland in 2015. He is a fan of new Scotland recruit Jacob Brown, a teammate at Stoke City

Brown, whose mother is from Glasgow, is the latest English-born player to be added to the ranks after Adams’ recent success. Clarke likes the fact that both forwards have grafted to get where they are now.

“He’s certainly had a similar progression through the ranks,” said the Scotland manager. “He was released as a young kid (by Sheffield Wednesday) and then had to find a way back to senior football through non-league at Guiseley before he went to Barnsley.

“So he comes with a hunger having been rejected. He’s a wee bit different to Che - he’s a pest, he’s energetic. If you’re a defender you know you’re in a game because he’s constantly asking questions of you.

“He’d done great for Stoke playing up front as a striker beside big Steven Fletcher. Fletch has given me a good recommendation through a third party. If Steven is recommending him then you know he’s got something.”

Clarke revealed that Brown was on the verge of a Scotland under-21 call-up after breaking into the Barnsley team under then manager Daniel Stendel.

“He’s been on the radar for a while, I’m pretty sure he was going to be called up for the under-21s just before Covid hit when we became aware his mother was from Glasgow, Robroyston I believe,” revealed the manager.

Clarke has quelled the fury of St Johnstone fans, who were quick to register their dismay when the Perth club's ‘keeper Zander Clark was left out of the last Scotland squad.

Clark’s performance in the 1-0 win over Dundee United on Saturday only increased the agitation of these supporters over his perceived Scotland snub but he has been recalled, at the expense of Motherwell’s Liam Kelly.

Clarke has included the defender after talks with the London club. “I think Kieran will be on the plane and if he’s on the plane, he’ll be fit,” said Clarke. “That’s my opinion.

“Obviously you have to respect the club. The club are telling us he’s working his way back to fitness. They are hopeful he could be involved this weekend (v Watford).”