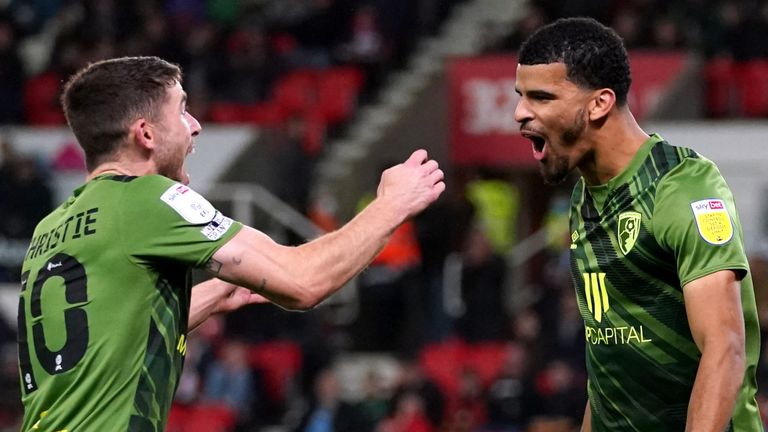 Bournemouth went six points clear at the Championship summit after a battling 1-0 away win over fellow promotion-chasing Stoke.

Striker Dominic Solanke's 51st-minute goal did the damage and the former Chelsea man also hit the crossbar as the Cherries inflicted a first home league defeat of the season on the Potters.

Jordan Thompson struck a post with the hosts' best chance of the game, but Solanke's eighth goal in his last 11 matches was just what Scott Parker's impressive side needed.

The Cherries are now unbeaten in 13 league matches so far this season and have not conceded in their last six league away matches.

Stoke boss Michael O'Neill made two changes to his starting line-up, as Thompson and midfielder Sam Clucas returned, while Romaine Sawyers and Mario Vrancic dropped to the bench.

Potters fans were delighted to see popular striker Tyrese Campbell make the bench having been sidelined with a long-term injury.

Parker made just one change to his starting team with Colombian midfielder Jefferson Lerma handed the chance to shine.

That meant forward Jamal Lowe had to settle for being a substitute as the Cherries looked to extend their immaculate record on the road this season.

But it was the hosts who had the first chance at the bet365 stadium, although Jacob Brown rifled a shot wide of the target.

Stacey shot wide soon after but then turned provider as Philip Billing wasted a great chance to fire the Cherries ahead in the 19th minute.

Stoke were then struck with a sucker-punch as their leading scorer Nick Powell was forced to limp off with a foot injury.

Powell, who has scored six goals in nine games in all competitions this season, took a hefty knock from Lerma - and his evening was over moments later.

Wing-back Ben Wilmot headed frustratingly wide from Souttar's header into his path from a corner as the hosts went close.

The visitors started with real purpose after the break and Lerma blazed high and wide just five minutes after the restart.

And the Cherries then took the lead after Davies spilled Ryan Christie's powerful right-foot shot - and there was a thankful Solanke, to poke home from close range.

Stoke rallied and came within a whisker of levelling, but Thompson smashed a shot against the right-hand post, much to the frustration of the home supporters.

O'Neill then shuffled his pack and introduced striker Sam Surridge against his former club, with the hosts hungry for an equaliser.

Centre-back Souttar headed wide from Vrancic's cross as the hosts dug deep to try and find a way back into the contest.

O'Neill introduced Campbell to try and get the goal the Potters craved.

But the Cherries nearly put the match out of reach when Solanke rattled the crossbar with a stunning strike from the edge of the box. It was a real let-off for O'Neill's team.

Sub Campbell had an excellent chance to level with 10 minutes to go, but he shot straight at Cherries keeper Mark Travers.

Vrancic tried his luck with a long-range free-kick in injury time, but Travers saved easily.