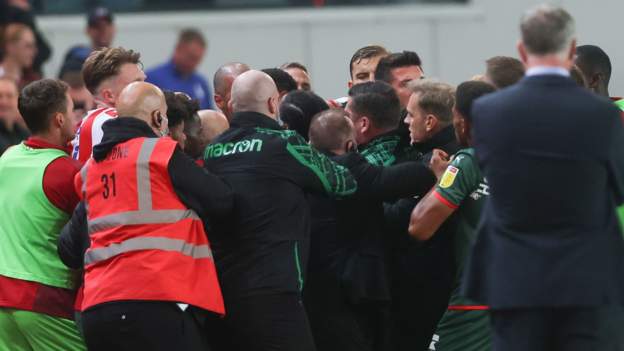 Stoke City have been fined £10,000 and Barnsley fined £8,000 following their ill-tempered 1-1 Championship draw on 15 September.

Barnsley coach Joe Laumann and Stoke coaches Dean Holden and Rory Delap were all sent off in the game.

The sendings off followed heated scenes on the touchline after Stoke's Tommy Smith was sent off late on.

Both sides admitted failing to ensure their players and coaches conducted themselves in an orderly fashion.

Smith was given a straight red card for his 85th-minute lunge at Barnsley substitute Claudio Gomes before tempers flared on the sidelines.

Tykes assistant Laumann was given a two-game ban for his part in the incident, as well as a £2,500 fine while fellow Barnsley coach Tonda Eckert was given a three-game ban and a £2,750 fine.

Meanwhile, Holden and Delap were given a one-game ban each and fined £2,000 and £1,800 respectively, with Delap also admitting his behaviour constituted violent conduct.