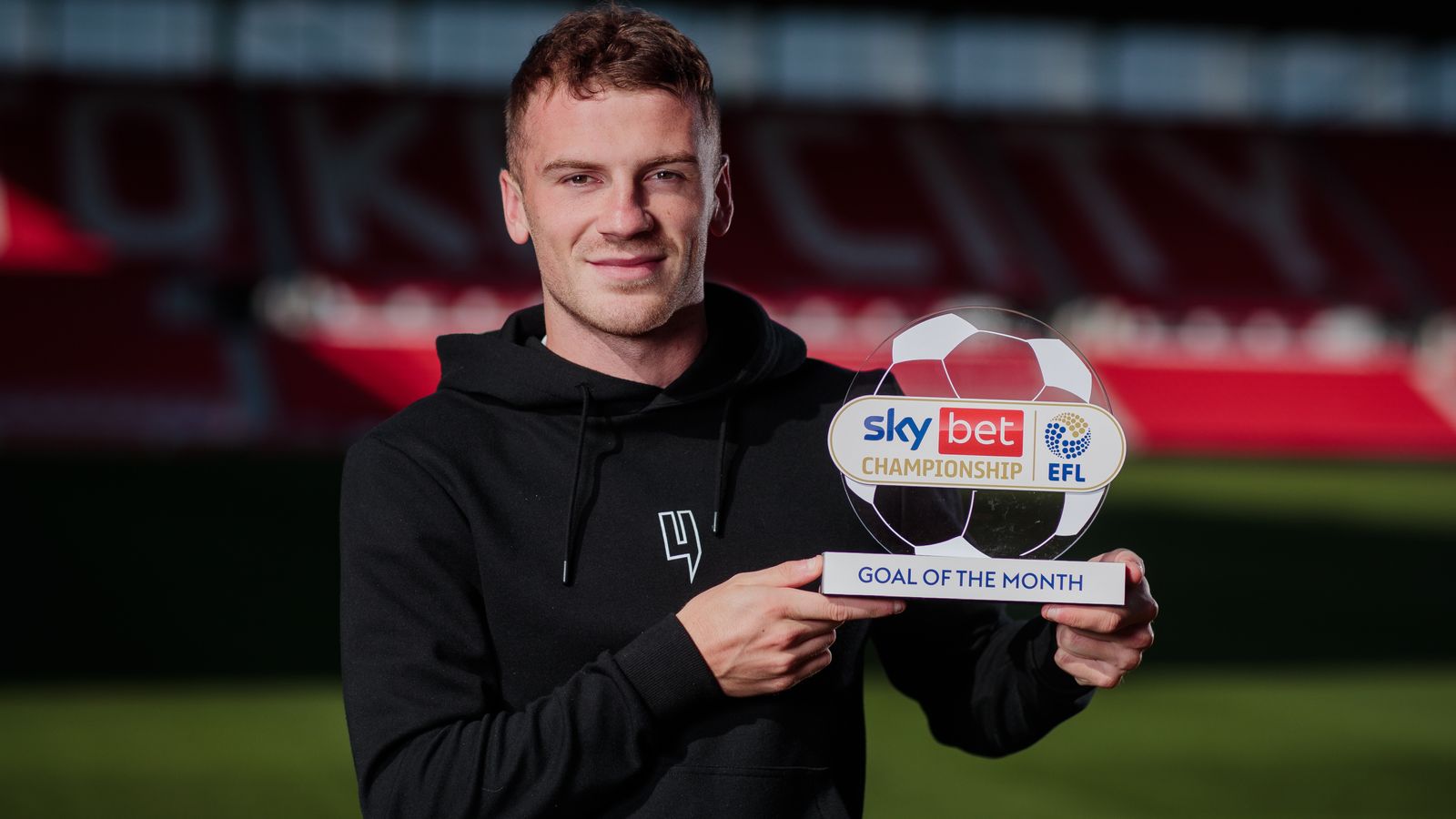 Stoke City defender Josh Tymon is the Sky Bet Championship Goal of the Month winner for August, receiving 66 per cent of the public vote.

Six players, five touches, imagination, vision, the subtlest of dummies, the deftest of flicks and an unerring low finish from Tymon made Stoke's team goal a thing of Potteries beauty.

Tymon said: "The goal against Forest was a fantastic team effort and I was fortunate to be the player who got to set the seal on such a great move.

"I'd like to thank all those people who voted for the goal - it's a nice accolade for us as a team to have."

Lead Sky Bet EFL Goal of the Month judge and Sky Sports Pundit Don Goodman said: "It is truly amazing having large crowds back in our football stadiums so they can witness stunning goals like this live once again.

"This goal was a thing of beauty, crafted quickly with fast, dynamic movement and brilliant one touch football, team goals don't get much better! Josh Tymon was the man on the end of the move and to get there, he had to show desire and once there, composure…he did just that."

Sunderland midfielder Elliot Embleton is the Sky Bet League One Goal of the Month winner for August, receiving 57 per cent of the public vote.

Embleton was already moving as he tucked a throw-in around the corner to Lynden Gooch. Seizing the return pass, he sent an exquisite left-foot curler spinning into the far corner.

Embleton said: "Thank you to all of the fans who voted. It was a special goal for me because it was my first at the Stadium of Light in front of our own supporters, which is something I have waited a long time to do.

"It's been a strong start to the season and we have implemented the way the gaffer has asked us to play, so hopefully we can kick on and keep winning. I've been here since I was six years old and this is my club, so I'm loving every minute."

Lead Sky Bet EFL Goal of the Month judge and Sky Sports Pundit Don Goodman said: "Forgive the pun but Embleton has been emblematic of Lee Johnson's promising young side this season, coming back from a loan spell at Blackpool to impress in the early weeks of the season.

"His goal had all the hallmarks of a player with confidence flowing through him, a throw in, a quick one two and a curling effort into the far post executed in style…stunning!!"

Hartlepool United midfielder Gavan Holohan is the Sky Bet League Two Goal of the Month winner for September, receiving 52 per cent of the public vote.

Holohan didn't have time to plan as the ball was shovelled towards him by a defender. Controlling it with his weight shifting backwards, his swing of the boot was timed perfectly.

Holohan said: "It's always nice to win awards, and it was one of my favourite goals for the club, in a bit of a derby game for the club, the Vic was bouncing that day.

"I owe a bit to [Jamie} Sterry, because I'd gone to show for the short throw, and he told me to go away and get into the box in the politest terms, and the guy's just headed it down to me, and it's all about getting it down and making good contact after that."

Lead Sky Bet EFL Goal of the Month judge and Sky Sports Pundit Don Goodman said: "Failure to clear the ball from a long throw was fatal for Carlisle with Holohan waiting on the edge of the area

"Make no mistake, there was still work to be done but Holohan's chest control and sweetly struck volley into the top corner put his side into a 2-1 lead which eventually secured all three points for the Pools. A goal that deserved to win any game."