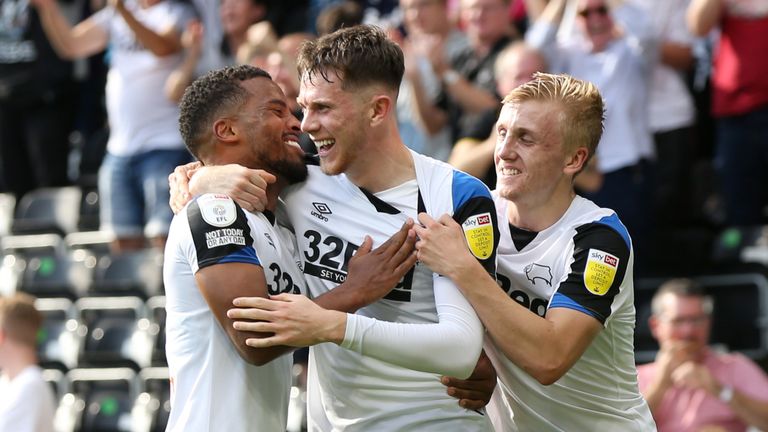 Max Bird celebrated his 21st birthday with a stunning strike that put crisis club Derby on course for a 2-1 win over Stoke.

The midfielder unleashed an unstoppable shot from distance before Curtis Davies doubled the lead with a header.

Derby, set to go into administration and incur a 12 point deduction, were by far the better side in the first half but Stoke hit back in the second.

Former Derby winger Tom Ince pounced to give the visitors hope and Derby had to withstand fierce pressure to hold on for a morale-boosting victory.

Despite the club's dire financial position, there was a defiant mood among the home fans and Derby responded with a positive start.

Ravel Morrison created the first chance in the fourth minute when he played in Lee Buchanan but his shot was blocked at the near post.

Stoke were guilty of too many misplaced passes in the opening 15 minutes but Ince found the right ball in the 21st only for Graeme Shinnie to deny Sam Clucas.

Abdallah Sima got behind Derby's defence but miscontrolled the ball before Ben Wilmot's shot was easily saved by Kelle Roos.

Stoke were starting to get into their stride and Josh Tymon flashed in a low cross which just evaded Sima in the 26th minute.

But Derby stunned the visitors in the 32nd minute when Stoke failed to get the ball clear and Bird fired a shot from 25 yards into the top right corner.

It got even better for Derby two minutes later when Davies beat Josef Bursik to a free-kick and headed into an empty net.

Stoke were reeling and Derby had a great chance of a third in the 42nd minute when Morrison played in Sam Baldock but his shot lacked the power to beat Bursik.

It was a great first half for Derby and a poor one for Stoke who should have gone further behind at the start of the second.

A mix-up between Wilmot and Bursik in the 50th minute presented Morrison with an open goal but he fired into the side-netting.

That looked an even bigger miss eight minutes later when Ince ran onto a Mario Vrancic pass to fire low past Roos.

Ince fired wide following a corner before Wilmot headed just over as Stoke pressed for an equaliser.

Roos got his body in the way of another shot and Davies made several vital clearances in stoppage time to give Derby a memorable victory.