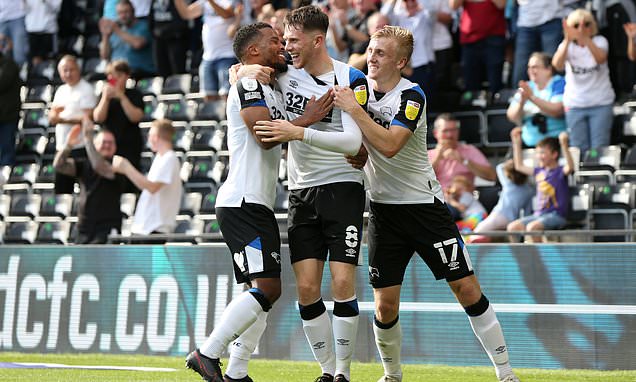 With 10 minutes remaining of the first half, it was just about possible to forget that Derby County is a club in crisis. They had just scored twice in three minutes against Stoke City, Wayne Rooney was beaming, the home supporters were bouncing and the sun was shining.

Yet when the pure joy that football can bring subsides, Derby’s players, staff, their other employees and their fans would have experienced the same cold, lonely feeling they felt on Friday night, when they heard the news.

Derby are heading for administration, which means much more than the 12-point deduction that makes them favourites for relegation.

Jobs will be lost. Those owed money by the club may not receive all of it. Families will worry. People’s mental and physical health will suffer. For a time, the weekend routine – meeting friends, talking about the game, recalling memorable matches – will not seem quite as enjoyable.


‘It doesn’t make a difference to them,’ says 81-year-old Brian Smith, who has been following Derby home and away for 55 years. He is gesturing towards a display on the side of the stadium, featuring an image of Brian Clough, but his anger is intended for others – owner Mel Morris and the board of directors, who he blames for Derby’s financial peril. ‘As always, it is the fans who suffer. This is the worst situation I have known in all my time supporting the club.’

‘I am worried we will end up in League Two,’ adds Keith Beighton, 49. ‘If we took all our punishment this season and started the next one in League One, with a clean slate and new ownership, I would settle for that.

‘But my worry is that we’ll be punished again by the EFL next season.’

Beighton echoes the fears of a number of fans – that the 12-point hit will not be the only one Derby take. They were already in dispute with the EFL over historic breaches of spending rules, with a further nine-point deduction possible. A two-year transfer embargo is also on the horizon, which would inevitably affect the positions of the club’s scouting and recruitment staff.

The impact is felt everywhere. There were suggestions of an emergency meeting of the club’s Safety Advisory Group on the morning of this match, which could have put the fixture in doubt. On the walkways outside Pride Park, burger van owners suspected the club’s desperate need for cash would see their annual rent go up.

Plans were hatched for a supporter protest outside the stadium at the final whistle. Not surprisingly, the parking spaces of Morris and chief executive Stephen Pearce were still unoccupied less than an hour before kick-off.

Rooney’s black 4x4 was there, however, and England’s record goalscorer was in fighting mood again prior to kick-off. He revealed he had learned the club were in administration when he saw it on television, but – not for the first time in his turbulent nine-month spell in charge – urged unity.

His team talk clearly worked as Derby were sharp from the off. Lee Buchanan was teed up by Ravel Morrison, with the ball only just scrambled behind for a corner. Morrison then accidentally blocked Tom Lawrence’s goalbound shot before Max Bird put Derby ahead with a glorious strike from 25 yards just after the half-hour mark.

Three minutes later, Derby did it again. Goalkeeper Josef Bursik and defender Ben Wilmot found themselves in a muddle over Graeme Shinnie’s floated free-kick, and Curtis Davies outjumped both to head Rooney’s men into a 2-0 line. In the technical area, England’s record scorer wore a broad smile.

Derby could have made it three before the interval as Stoke wobbled. Morrison’s perfect pass released Sam Baldock, who shot straight at Bursik and then fluffed the rebound. In stoppage time, for old time’s sake, Rooney had a restorative blast at the fourth official.

Even in retirement, Rooney would never have squandered the chance wasted early in the second half by Morrison. Following another mix-up between Wilmot and Bursik, Morrison took the ball but somehow guided it wide of the empty net from five yards. At the other end, former Derby man Tom Ince was more accurate with his finishing as he swept in at Kelle Roos’ near post to revive Stoke’s hopes.

Earlier, Roos had saved point blank from Sam Surridge and in the closing minutes, the visitors were bizarrely denied a penalty when Sam Clucas was sent tumbling just inside the box. It meant Derby could hold on for their first home win of the campaign. Rooney swapped handshakes with his coaches and Stoke boss Michael O’Neill.

Derby got away with one there – but they will need much more than a dodgy penalty call to go their way if they are to escape this mess. ‘The Rams are staying up!’ yelled the home supporters. It will take something quite remarkable to prove them right.