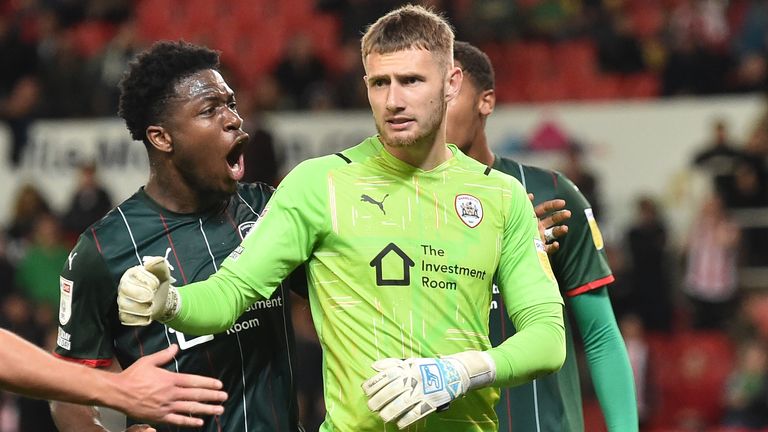 Mario Vrancic's first-half penalty miss proved costly as 10-man Stoke were held to a 1-1 draw by Barnsley in an ill-tempered Championship clash.

The hosts, who had won three of their previous four league games, would have fired themselves into the top two if it was not for Brad Collins' superb save just before the break.

After Tommy Smith was sent off late on for the home side, Stoke coaches Dean Holden and Rory Delap, plus and Barnsley assistant Joe Laumann were also shown red cards following an ugly touchline melee.

The visitors were indebted to goalkeeper Collins, who was in inspired form on what was a frustrating night for the in-form Stoke.

It was quite a slow-paced start at the bet365 Stadium and it took nine minutes for the first opportunity to arrive.

Image: Brad Collins made a string of fine saves to deny Stoke victory

Smith whipped in a super cross towards the far post for Vrancic, but he was denied by a smart last-ditch intervention from Barnsley wide-man Toby Sibbick.

Romal Palmer touched a neat pass into Cauley Woodrow's path and he saw a curling strike from 20 yards brilliantly palmed behind by Stoke stopper Joe Bursik.

Stoke then broke the deadlock after 17 minutes. Smith whipped in another cross which Michal Helik tried and failed to clear, leaving Sam Surridge an easy task of tapping his fourth goal of the season routinely past Collins.

Stoke's tails were up by the midway point in the first half and Surridge this time made a hash of another precise cross from Smith.

With Barnsley going through something of a shaky spell, Vrancic also tried his luck from distance, but Collins was equal to the task.

Markus Schopp's visitors appeared badly in need of some inspiration and they certainly got it seven minutes before the interval.

After Callum Styles had been needlessly bundled over, Woodrow stepped up and curled a free-kick spectacularly into the top corner of the net from 22 yards out to level the scores.

The hosts then fluffed a great opportunity to re-take the lead with the final kick of the first half.

After Surridge had been clipped by Collins in the box and a penalty awarded by referee Leigh Doughty, the clearly-aggrieved Barnsley goalkeeper dramatically responded by superbly palming Vrancic's spot-kick onto the crossbar and away to safety.

Barnsley were brighter at the start of the second period but this was turning into a real ding-dong battle, with Collins then producing a breath-taking point-blank save to keep out Vrancic's header.

The tempo dipped again as the final 15 minutes approached, though Woodrow threatened again when he side-footed the ball narrowly wide from 15 yards.

Stoke substitute Sam Clucas was denied by another excellent Collins save with 10 minutes to go, before the hosts' cause was further hampered by Smith's straight red card in the 85th minute following a lunge on substitute Claudio Gomes.

The later touchline clash took further shine off an otherwise entertaining clash as the spoils were shared.