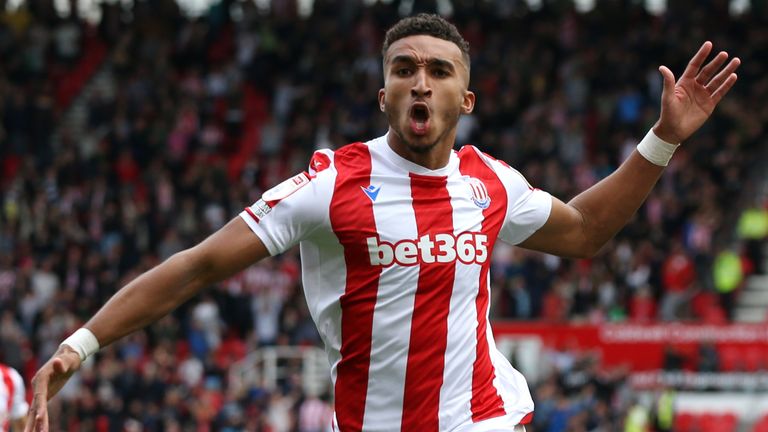 Stoke came from behind to beat in-form Huddersfield 2-1 and move third in the Sky Bet Championship.

Jacob Brown's header cancelled out Harry Toffolo's opener before a Matty Pearson own goal settled the contest, with all three goals coming in the second half.

A well-organised Stoke side kept the Terriers pinned inside their own half in a tight opening 45 minutes, and striker Sam Surridge proved a handful early on.

He headed over Mario Vrancic's cross after 10 minutes and was lurking in the box again on the quarter hour but was not quite able to stretch far enough to guide home Ben Wilmot's cross.

Seeking a fourth successive win, Huddersfield enjoyed a better spell midway through the first period. The impressive Sorba Thomas won a corner that he then delivered onto the head of Pearson which flashed behind via a deflection for another corner.

This yielded an even better opportunity, as a Thomas inswinger was flicked on by skipper Jonathan Hogg but Naby Sarr could not keep his close-range header down and Stoke survived.

The home side pressed with increased purpose as the half wore on, with Josh Tymon proving a constant menace down the left.

His deep cross forced Sarr to head behind with Surridge waiting for a free header, before another wonderful Tymon delivery saw a stretching Brown inches away from converting the opener.

Tom Lees headed over from a Thomas free-kick as Huddersfield played on the counter, before Tymon created a chance for himself with some neat footwork but blasted a right-foot effort well over.

This fixture produced seven goals last season and the Terriers opened the scoring here two minutes after the restart.

Stoke goalkeeper Joe Bursik opted to block a Thomas free-kick with his feet and as the ball cannoned back off Hogg, Toffolo was on hand to sweep home.

The response was immediate as the Potters won a corner and Brown rose unmarked to head Vrancic's delivery past goalkeeper Lee Nicholls.

Stoke were ahead in the 63rd minute. Man-of-the-match Vrancic was again the creator as his run and low cross caused havoc in a hesitant Town defence and Pearson, with his legs in a tangle, could only divert the ball into his own net.

Thomas looked the most likely to rescue a point for Huddersfield, and he fizzed a low-free kick inches wide with seven minutes to go with Bursik beaten.

But that was as close as the visitors came and Stoke should have had a third when Sam Clucas side-footed over the crossbar when clean through on goal.