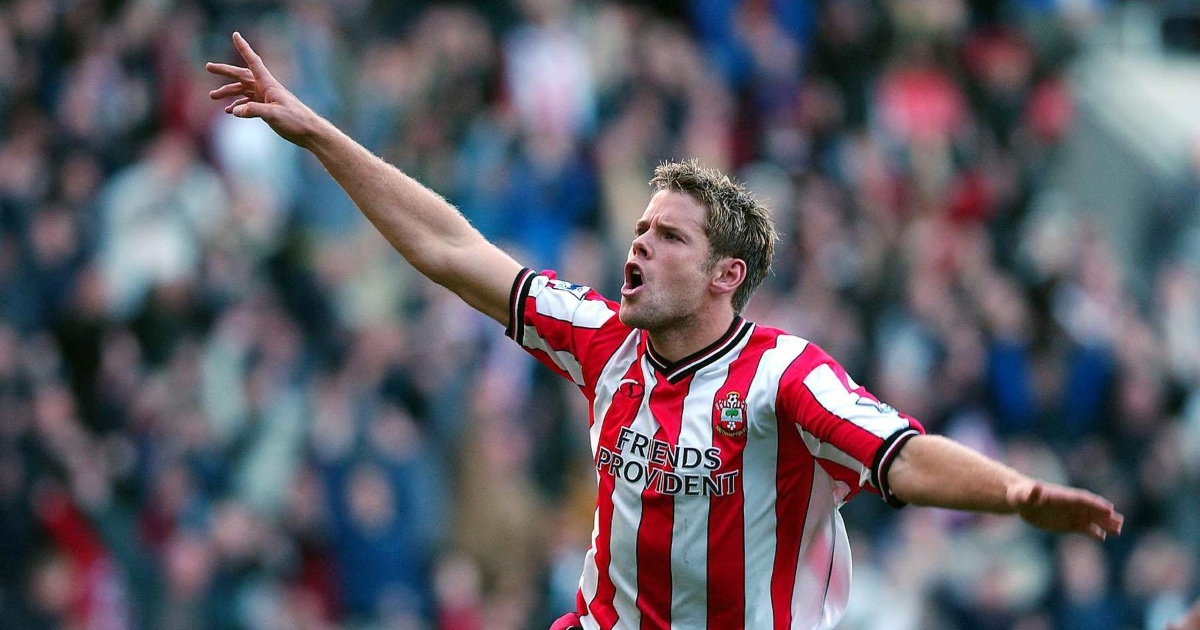 You probably know James Beattie scored a fair few goals in his career, but unless you support Southampton, Everton, Sheffield United or Stoke City, you probably don’t know just how good he was.

James Beattie wanted to be a brain surgeon. Either that or a professional swimmer. He went to a grammar school and would swim 50 miles a week in the pool in pursuit of his dreams.

He received good grades and aged 14 was ranked second in the country for 100 metres freestyle. But a cartilage problem in his shoulder and talk of early-onset arthritis pushed him towards his third-choice career path: football.

Fans of Southampton, Everton, Sheffield United and Stoke City, you have a dodgy shoulder to thank for all the goals, good times and questionable haircuts.

However, despite being the Premier League’s 35th most prolific goal scorer with 91 goals, Beattie remains a somewhat underrated figure. He won just five caps for England, with Emile Heskey and Darius Vassell preferred by Sven Goren Eriksen for his Euro 2004 squad – and that was that.

“I don’t think I was really given a fair chance,” Beattie told the BBC in 2013. Upon reflection, his domestic career suggests he has a point.

At his peak Beattie had it all as a striker. He was good in the air, had a strong right foot and was deadly from set-pieces. He was hard-working, intelligent and relatively quick. At Southampton he was the foreshadowing prototype of Rickie Lambert.

After coming through at boyhood club Blackburn, and being inspired first-hand by Alan Shearer, Beattie was brought to Saints by Dave Jones, who had been impressed after seeing him play alongside his son in his formative years. Kevin Davies went in the opposite direction for £7million, increasing the expectation.

Beattie immediately set about making a name for himself at The Dell. With Southampton up against it at the wrong end of the Premier League table, he came to the fore.

Looking purely at the numbers you’d be hard-pushed to see Beattie’s impact – he managed just five goals in his debut season. But two goals in the final three games of the 1998-99 season, one of which was a reimagined slow-motion Marco van Basten effort, moved Saints out of the relegation for the first time that season.

Southampton completed the great escape and an emboldened Beattie set about a career on the south coast which would bring him 76 goals in 233 appearances.

Injuries – a common theme in the striker’s career, and what he believes held him back slightly – blighted the next season. But after turning down a move to Crystal Palace he began banging in the goals.

The zenith of his 17-year professional career came in the 2002-03 season when only Thierry Henry and Ruud van Nistelrooy out-scored him in the top flight.

Despite playing in a fairly modest Gordon Strachan side, Beattie left the likes of Michael Owen, Alan Shearer and Nicolas Anelka in his wake to score 23 times in nine months.

In from the moment it left his boot 💥⚽️

Beattie’s goals – a lovely mixture of thumping headers, free-kicks, penalties and tap-ins – were perhaps the single biggest factor in Saints’ success under Strachan that season.

They finished eighth in the Premier League, their highest ever placing in the division at the time, and reached the FA Cup final, where they narrowly lost to Arsenal, still qualifying for Europe.

Flanked by the likes of Brett Ormerod, Kevin Davies, Agustin Delgado and Marian Pahars, who managed just eight league goals between them, Beattie plundered 53% of the side’s total goal output.

Backed by Strachan, who set up the side to play to his strengths, he led Saints in a memorable 3-2 win over Arsenal, as well as triumphs over Tottenham in league and cup.

As well as being the height of his playing career, 2002-03 also served as the peak of Beattie’s writing prowess.

In a regular column for BBC Sport, he penned tales about Wayne “the Michael Schumacher of Scalextric” Bridge, clay pigeon shooting with chairman Rupert Lowe and losing his PlayStation 2 memory card.

Although his best times – and international recognition – came at Southampton, there were stand-out moments, both good and bad, afterwards too.

After a career-high £6million move to Everton, he top-scored for the Toffees in the 2005-06 season. His rich vein of form that season, which included an uncharacteristic chip from the edge of the box against Fulham, led once again to England speculation.

However, he fell out of favour at Everton and eventually dropped down to the Championship with Sheffield United, who paid a club-record £4million for his services in the summer of 2007. There he rekindled his best form, scoring 22 league goals and winning the Blades’ Player of the Year award.

His distinctive way of taking penalties – a thoughtful walk away from the ball, sharp 180-degree turn and charge – as well as countless trademarked downward headers, saw him become a fan favourite at Bramall Lane.

On he went to Stoke City for £3.5million in January 2009. He fitted the Tony Pulis blueprint perfectly, scoring seven goals in his first 16 Premier League appearances to steer the Potters away from relegation danger in their first season back in the top flight.

With his age and injuries beginning to get the better of him, he spent the final years of his career with stints at Rangers, Sheffield United once more and Accrington, where he eventually moved into management.

While Beattie is primarily remembered for his footballing exploits, his occasionally fiery temper cannot go unmentioned. In his time he headbutted William Gallas and fell out with his Everton boss David Moyes.

But it is a famous incident with Stoke manager Pulis that “is the only question I’m ever asked about”, according to Beattie.

A naked Tony Pulis headbutted Beattie in the showers after the striker objected to his response after defeat by Arsenal – an incident defender Ryan Shawcross later described as a “spectacle”. It may have been Ryan, but not one I’d like to see.

Beattie is between Kevin Davies and Ole Gunnar Solksjaer and Mark Viduka and Kevin Phillips on the Premier League’s all-time top scorers’ list. But he offered more than just goals. His legacy is much greater and deserves recognition.

Danny Cadamarteri: Being fast-tracked at Everton cost me my development

Can you name Southampton’s top 30 goalscorers of the PL era?

An ode to Daniel Amokachi, Everton cult hero and the best sub never made