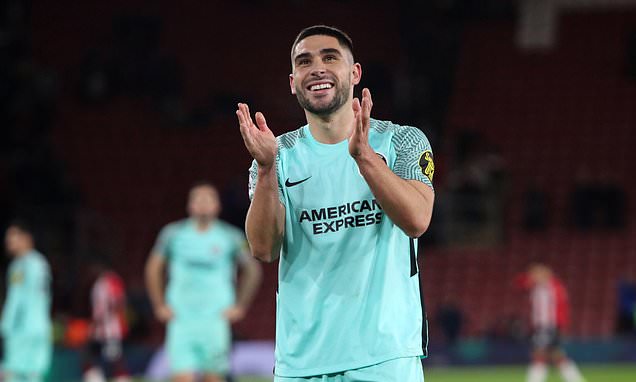 About 10 minutes after the full-time whistle, Neal Maupay reappeared from the tunnel and strolled over to the away end at St Mary’s.

Brighton fans were alerted via the stadiun announcer that trains back to Sussex might be cancelled after the 5.30pm service. But they were in no rush to leave.

They were busy singing their new favourite chant: ‘Hey, Neal Maupay. Ooh, ah. I wanna know how you scored that goal.’ Presumably it is about his midweek overhead kick against West Ham.

Another question for Neal: how do you continue to rise above criticism to pop up with huge equalisers? Derby day at Crystal Palace, 95th minute. At West Ham on Wednesday, 89th minute. At Southampton, 98th minute. It’s not a bad record for someone who is often dubbed the league’s most wasteful striker.


Only five players have more goals than Maupay’s six this season. He still has the second-worst record on a list of wasteful forwards — worked out by expected goals (xG) compared to actual goals — but his overall work rate is crucial to Brighton.

And what a character Maupay is, too. The Frenchman, 25, ran around cupping his ears to home fans. He had missed a sitter just minutes before.

The celebration gives off the impression that Maupay is a bit of a bad boy, but the forward is a quiet character and will seclude himself before matches to relax and read his book.

Southampton were the latest team heartbroken by Maupay, after West Ham and Crystal Palace

Maupay had been a low-scoring Premier League bad boy, but he has six goals this season so far

Not even No 1 sellers could write the storylines Maupay has for Brighton fans this season. Fifty per cent of their away goals have come after 89 minutes or later.

Last season, Brighton were famed for playing well but not getting results. This season it seems they can grind out points, Saturday’s draw coming in a match where they were second best.

It irritated Saints boss Ralph Hasenhuttl. ‘We dominated for the whole game and we didn’t win, this is awful,’ he said. ‘This is so hard to accept. It kills you. It feels like a loss.’

Saints have dropped 71 points from winning positions under Hasenhuttl — 15 more than anyone else in that time.

One positive was Armando Broja. The Chelsea loanee, 20, did a Cruyff turn before his goal. But his display and 97 minutes of superiority meant nothing when Maupay was unmarked in the six-yard box as the clock ticked into three figures.