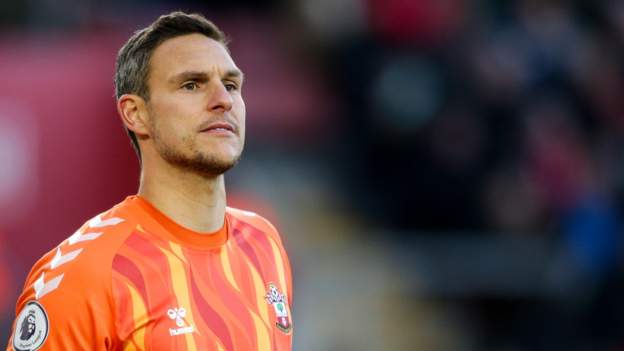 Southampton boss Ralph Hasenhuttl blamed Alex McCarthy for their 1-1 draw with Brighton after the goalkeeper failed to say he was playing injured.

Neal Maupay turned home a 98th-minute equaliser for the Seagulls after the ball was floated into the box following a blocked free-kick.

Hasenhuttl said he would have replaced McCarthy for the set-piece if he knew the extent of his hamstring problem.

"Alex must be definitely more professional than that," he said.

Maupay was crucially played onside by James Ward-Prowse, with Hasenhuttl saying his captain had raced back to cover McCarthy's left-hand post from Jakub Moder's free-kick because the goalkeeper feared he was not mobile enough to protect the entire goal.

"If you have a goalkeeper that is not 100% fit in that moment and cannot jump and then you send someone back into the line, then the rebound that comes out is normally offside," the Saints boss added.

"But Prowsey's there, so he has a free shot at goal. This is something we cannot accept. There must be a message, 'I cannot jump', and then we can make a change.

"Today I had one change [left] and I couldn't take it because he didn't say anything and this, for me, is not acceptable."

Hasenhuttl said the reason he still had a replacement available was so he could avoid the situation that Brighton found themselves in for the second successive game. The Seagulls finished the match with 10 men because of injury.

Ten minutes of injury time was added after Leandro Trossard left the field on a stretcher after landing awkwardly on his arm, with the visitors unable to make any more substitutions.

Maupay's goal came in the eighth of those extra minutes and cancelled out Armando Broja's brilliantly-taken first-half goal that looked to be enough to give Saints victory on the eve of Hasenhuttl's third anniversary in charge of the club.

The Austrian instead had to settle for a point and now faces as injury crisis as Harry Lewis remains their only fit senior keeper.

"Alex is out maybe for a long time, and Fraser Forster is also out injured," he said.