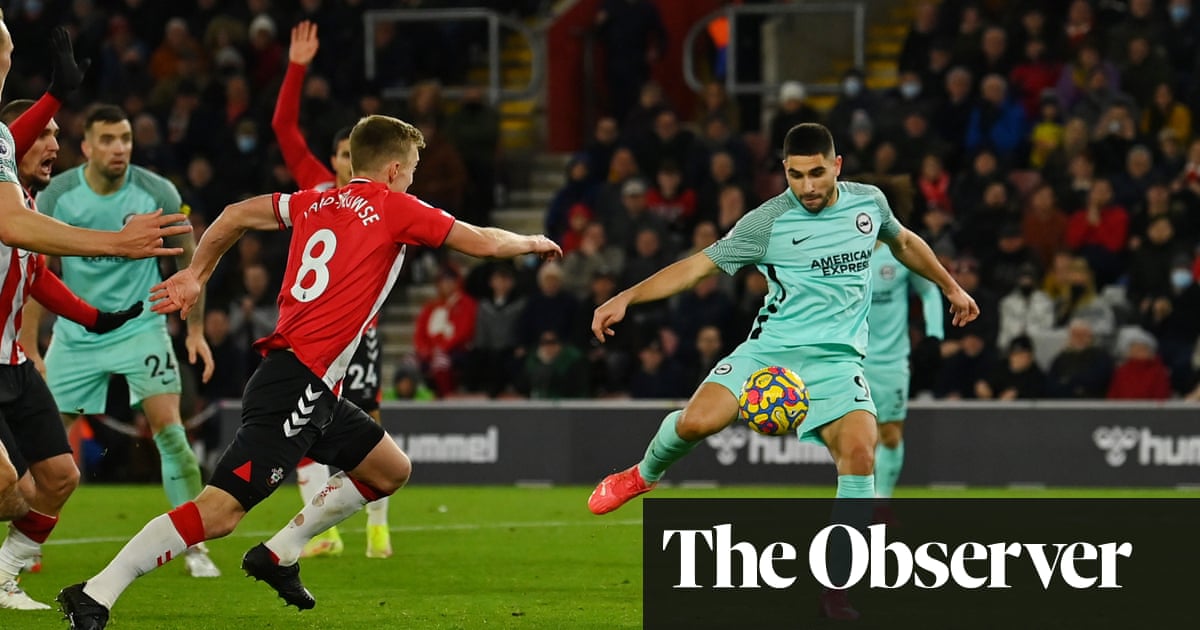 Down to 10 men following injury to Leandro Trossard and well into 10 minutes of second-half stoppage time, Neal Maupay rattled in a second late equaliser in four days to rescue another point for Brighton as Southampton succumbed to another spectacular collapse. Graham Potter had used all three substitutes when Trossard was forced off with a suspected dislocated elbow but just as it seemed defeat was inevitable, Maupay rifled in from close range after Jakub Moder’s free-kick fell kindly in the box. The delirious Brighton support threw a blue flare on the pitch and Southampton, whose players slumped to the floor in disconsolation at full-time, ended up being booed off.

This was not the way Ralph Hasenhuttl, one of Ralf Rangnick’s protégés, hoped to mark his three-year anniversary in charge of Southampton. They had led through Armando Broja, who has been something of a slow-burner for Southampton but there is no doubting his attacking proficiency. Hasenhuttl kept Broja keen in the early part of the season by critiquing his work-rate but all the while he knew he had a deadly finisher at his disposal and the Albania striker, who replaced Adam Armstrong in the starting lineup, scored his third goal of the season on his fourth league start. Broja scored twice on debut at Newport in the cup and another composed finish added to his impressive tally for the season but he did not head home the match-winner. He has eight goals in 17 games for club and country this season.

A couple of chances at either end had been and gone by the time Broja nonchalantly opened the scoring approaching the half-hour mark. It was a painful goal from a Brighton perspective, the Southampton centre-back Lyanco – the other Southampton change from Wednesday’s draw against Leicester – sending a Robert Sánchez kick back from where it came. Nathan Redmond flicked the ball on behind the Brighton backline with a cushioned header and Broja surged forward with Sánchez in his sights. Broja was urged to immediately take aim by the home support but had other ideas. He feinted to shoot across goal, luring Shane Duffy into making a desperate challenge, leaving the deputising Brighton captain skidding on his backside as the striker darted inside before finding the net with the outside of his right boot.

Broja had already sparkled. He had an early shot repelled by Sánchez after a swift Southampton counter-attack and a couple of minutes later the Chelsea loanee showed his skill, scooping the ball away from three Brighton players –Duffy, Marc Cucurella and Yves Bissouma – before driving at goal from an acute angle. Another player with Chelsea connections, Tino Livramento, who signed permanently in the summer, volleyed over after Southampton recycled a typically dangerous James Ward-Prowse corner and up the other end Enock Mwepu and Trossard forced Alex McCarthy into smart stops.

Southampton enjoyed the better of the first half but for a team that have struggled to see teams off – only Burnley and Newcastle have dropped more than the 12 points they have squandered from winning positions this season –there was a nervousness in the stands at how the second half would unfold. Such concern would surely have been eased had Broja added his and Southampton’s second five minutes after the interval. Redmond stole the ball and freed Livramento, who squared the ball for Broja in the box. But with the goal gaping the striker scuffed wide.

Brighton struggled to pierce the Southampton defence but Maupay, who rescued a point in midweek with a spectacular overhead-kick, came close to another precious equaliser. Brighton located him just inside the box and he curled a shot narrowly wide, leaving Graham Potter’s assistant, Billy Reid, kicking his heels on the edge of the away technical area. Then came another big chance with 13 minutes to play. The substitute Aaron Connolly located Maupay to his left but McCarthy repelled the ball with his right boot.

Brighton were reduced to 10 men when Trossard was carried off after receiving lengthy medical treatment following a collision with Redmond. Brighton may have been one man light but they continued to probe and in the eighth minute of stoppage time Maupay rattled in a memorable leveller.