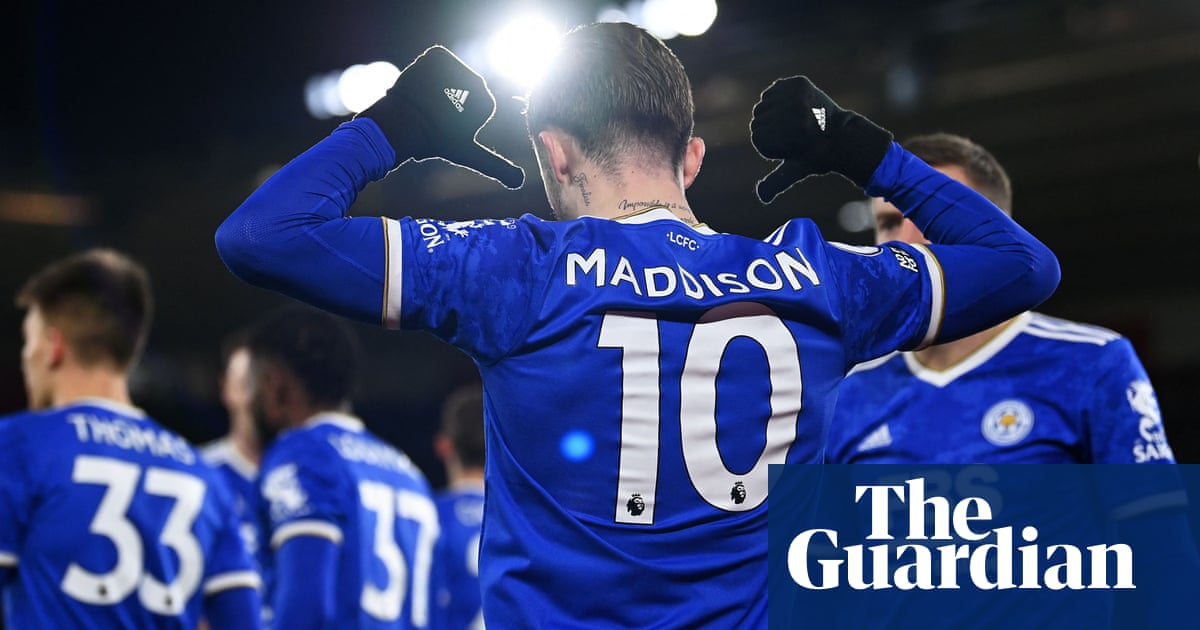 Fresh from blasting in an emphatic equaliser, James Maddison moseyed around the back of the Southampton net before turning his back on the ecstatic Leicester City support and pointing with both thumbs to the name on his shirt. A stinging strike, a broad smile and suddenly Leicester were back in the ascendency. Jamie Vardy squandered a golden chance to win it but ultimately it was a night when familiar failings put paid to any hopes of earning victory at Southampton. It is now one clean sheet in 20 matches, with Leicester twice equalising after goals by Jan Bednarek and Che Adams.

There was a collector’s item for Jonny Evans, who had levelled in the first half but Vardy, their talisman, passed up the best opening, driving over after being set free with 15 minutes to play. A few minutes earlier Harvey Barnes, racing on to a loose ball, was denied by a brilliant save by the Southampton goalkeeper Alex McCarthy, who flew down to his right to deflect his curled effort wide for a corner.

Brendan Rodgers, usually so unruffled, threw his head and shoulders towards the floor of the away technical area in frustration. The substitute Ayoze Pérez forced a fine save five minutes into stoppage time after a swift counterattack, kickstarted by Vardy on halfway.

Rodgers’s biggest concern reared its head within two and a half minutes. Leicester’s brittleness in defence – only Norwich have conceded more top-flight goals this season – will hinder any attempt to make a play for the top four and the signs were ominous when they twice crumbled defending short-corner routines against a team that have struggled for goals. Leicester responded to Bednarek’s early strike midway through the first half through Evans, who scored his first goal since scoring in a draw here last season, but they were pegged back before the interval after more sloppy defending.

Rodgers, hands in pockets, could only stare at the ground in disappointment. Southampton got off to a flyer and regained their advantage when Nathan Redmond curled a delicious cross into the box. Evans was pulled out of position and Adams nipped in between Timothy Castagne and Caglar Soyuncu to glance in beyond Kasper Schmeichel, who superbly repelled Mohammed Salisu’s shot in the buildup to Southampton’s opener, only for Bednarek to convert the rebound. Similarly, Evans hammered in after the Southampton goalkeeper Alex McCarthy denied Wilfred Ndidi.

If anything typified a frustrating half for the visitors, it was the sight of Maddison skewing a simple pass out of play on halfway five minutes before the break. By then, Southampton were feeling liberated in the final third. The travelling Leicester supporters were quick to remind the hosts of the most memorable of trips here two years ago but this time it was Southampton who appeared to be going for the jugular with only 35 minutes played. James Ward-Prowse was allowed to skedaddle to the byline before sending in a teasing cross, while Nathan Tella, one of three changes from their 4-0 defeat to Liverpool, dribbled an effort at goal, turning down the run of the overlapping Kyle Walker-Peters to his left. Adams also had another tame shot saved.

Leicester were left to stew on a frustrating opening 45 minutes, with the second half delayed 15 minutes by a medical emergency. Paramedics carried a home supporter out of the Kingsland stand on a stretcher before play resumed. The second half was barely a minute old when Southampton fashioned another inviting opening, Tella heading horribly off target after a hounding Ward-Prowse robbed Ndidi on the edge of the Leicester box.

Leicester were wobbling once more but Maddison equalised with a peach moments later.

Maddison started the attack and finished it in style. He skipped down the left and, after latching on to a through ball by the Leicester full-back Luke Thomas, proceeded to teach the Southampton teenager Tino Livramento a harsh lesson, wringing the defender inside-out before clinically dispatching a shot at goal, beating McCarthy at his near post.

Maddison soaked up the adulation from the away fans and now he was grooving. A couple of minutes later the Leicester midfielder, hair slicked back, snaked his way past a sheepish Livramento, the defender seemingly scarred from their previous duel.

That proved just the start of a scintillating, end-to-end crescendo.