DEBATE - Robbo's response & changes for the derby?
This Is Anfield 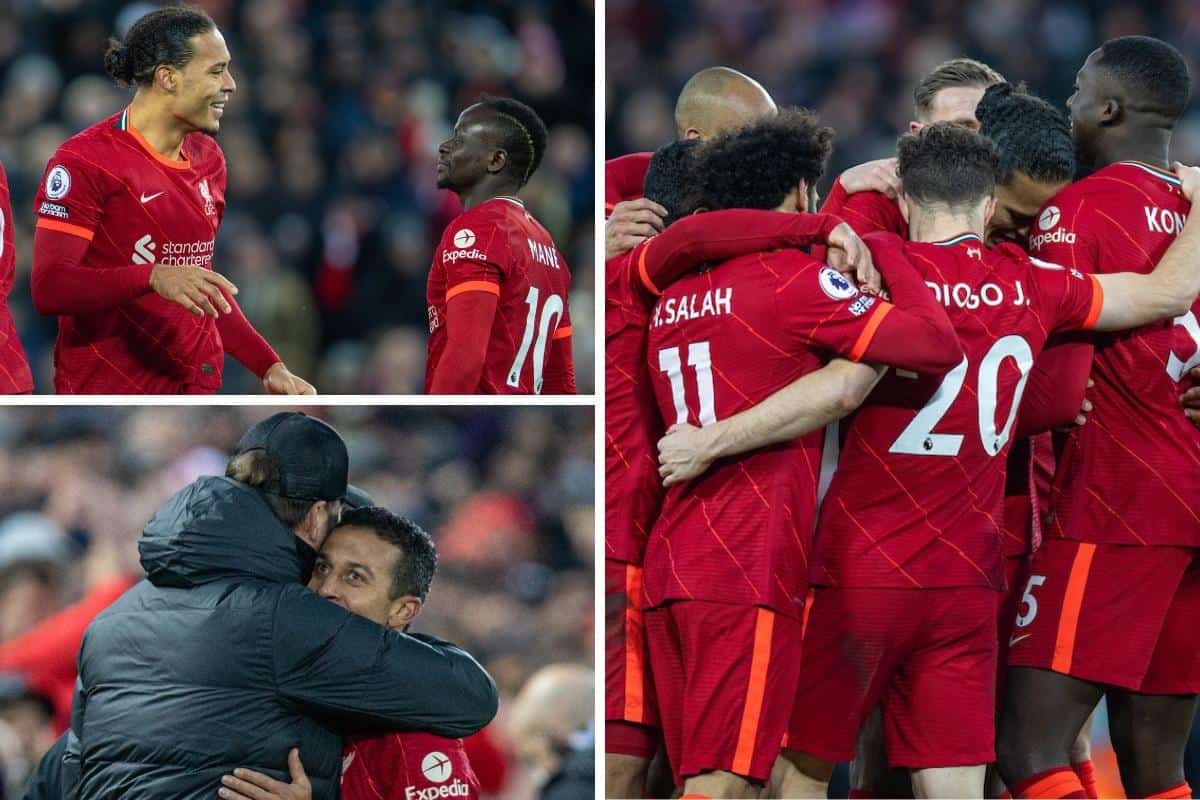 Liverpool can look to Wednesday’s Merseyside derby in confident form after a second consecutive 4-0 win in the Premier League, having thrashed Southampton at Anfield.

Having followed up their 4-0 victory over Arsenal with a comfortable 2-0 win against Porto in the Champions League, the Reds scored another four on their return to league action.

It was a straightforward afternoon for Jurgen Klopp‘s side, with Diogo Jota scoring twice, Thiago netting another and Virgil van Dijk finding the back of the net for the first time since the opening day of last season.

Andy Robertson returned to the side after injury and produced a scintillating display at left-back, with Klopp now able to look to the trip to Everton with welcome decisions to make.

So what could Liverpool take from their latest triumph at Anfield?

Here, Jack Lusby (@LusbyJack) speaks to Matt Ladson (@mattladson) and Danny Gallagher (@Danny7Gallagher) to cover the big topics from Liverpool 4-0 Southampton and look ahead to Goodison.

Has Robbo settled the left-back argument with that performance?

While Kostas is an amazing second choice, there is little denying that when Robbo is on form, he’s the main man at left-back.

It’s clear that, whether subconscious or not, he needed a bit of a kick up the arse, though, and I feel not only did Kostas’ form do that, but so too did the conversation of whether he should take over as first choice.

Saturday was one of Robbo’s best games for us in a long time, and thankfully now, Klopp has the option of rotating his left-backs to ensure a consistent level of performance in the position.

MATT: I’m not sure there was ever an argument really. It’s exactly how Klopp said it on Friday, Robertson was and will always be first choice.

The focus should more be on how having Kostas has meant Robbo can actually be rested and therefore come back and play back to his old levels.

When Klopp said when signing Kostas that he couldn’t play Robertson (and Trent) for 50-plus games per season he was absolutely correct, but that happened again last season due to other circumstances.

Now, with Kostas as reliable understudy, Robbo can be rotated more and therefore we can get the best from him again. Valuable in the latter half of the season to come.

DANNY: While Tsimikas has really come into his own this season and taken his chances, there’s really no left-back in world football who can give a fully flying Robertson a run for his money.

The signing of Tsimikas, and the coaching that has followed, is really proving a masterstroke now.

As Jack and Matt have said, it has not only afforded Robertson room to recover sufficiently between heavy periods of constant play, but also raise his game to the level where elite competition is still warded off.

His stats were off the chart against Southampton and we do have a certain Greek Scouser to thank for playing a role in this.

Who else stood out for you?

JACK: It was a perfect team performance, including Klopp’s use of the bench to give Milner and Minamino minutes and rest Hendo and Thiago‘s legs.

But here, I’m going to have to reserve special praise for Jota.

In Firmino’s absence, there have been concerns over whether Jota can really fill that all-round forward role to the standard required, rather than simply as a poacher.

Against Southampton, Jota produced close to a complete display as a No. 9, and it was essential given how his movement in dropping deep made a mockery of Hasenhuttl’s 3-4-3.

Of course, he was there to tap in two goals, too – and he could have even ended the game with a hat-trick – so that’s a job well done.

MATT: It was a weird game in terms of a ‘Man of the Match’.

Arguably that was Alisson as he did literally nothing wrong and excelled at what he was tasked with doing, making some superb stops in the first half in his usual manner in one vs. one situations.

You could make similar arguments for Mane, Salah and Thiago.

It was a game where nobody excelled (and weren’t really needed to) but everybody played well individually and collectively. Really the ideal performance in such a game.

But for me, Sadio Mane really caught the eye.

He’s looking so fit, lean and powerful this season. To notice the marked difference on a player who religiously keeps himself in shape and treats his body like a temple shows the scale of work he’s now putting in.

Against his former club he was unplayable out wide and invited challenge after challenge.

A large part of why Liverpool are so successful up front comes down to Mane’s sheer presence, whether or not he’s scoring goals.

And would you make any changes for the Merseyside derby?

JACK: I’d say the only points of contention come at centre-back and perhaps in midfield.

Matip’s omission at Anfield was likely part of the long-term plan to manage his fitness, and though Konate grew into the role against Porto and Southampton, he should return alongside Van Dijk for the derby.

Then, it’s just a question of whether Henderson keeps his place or Klopp turns to either Oxlade-Chamberlain or possibly even Milner.

Given the manager has already voiced his fears over the aggression of the derby, it may even be wise to go with a midfield three of Fabinho, Hendo and Milner for this one.

MATT: I’d personally play the same XI but with Matip in. Saturday to Wednesday is a good period between games.

However, Klopp has often thrown a wildcard in the derby so I wouldn’t be entirely surprised to see Origi and Milner start!

With Wolves to follow on Saturday, it might be that he rotates somewhat with that in mind, then knowing he can completely rotate in Milan next week.

DANNY: Bringing everyone off with a clean bill of health was huge and, I agree with Matt, hardly any tweaks for the derby are necessary.

Thiago and Fabinho look to be operating in seamless tandem and Henderson has that bit more gas in the tank having been replaced late on.

If anything, the only area of consideration would be Konate.

The Frenchman looked so much more robust alongside Van Dijk on Sunday, but Matip is itching to be slotted back into the side.

I can see Klopp going for the old reliable centre-back pairing for Everton.