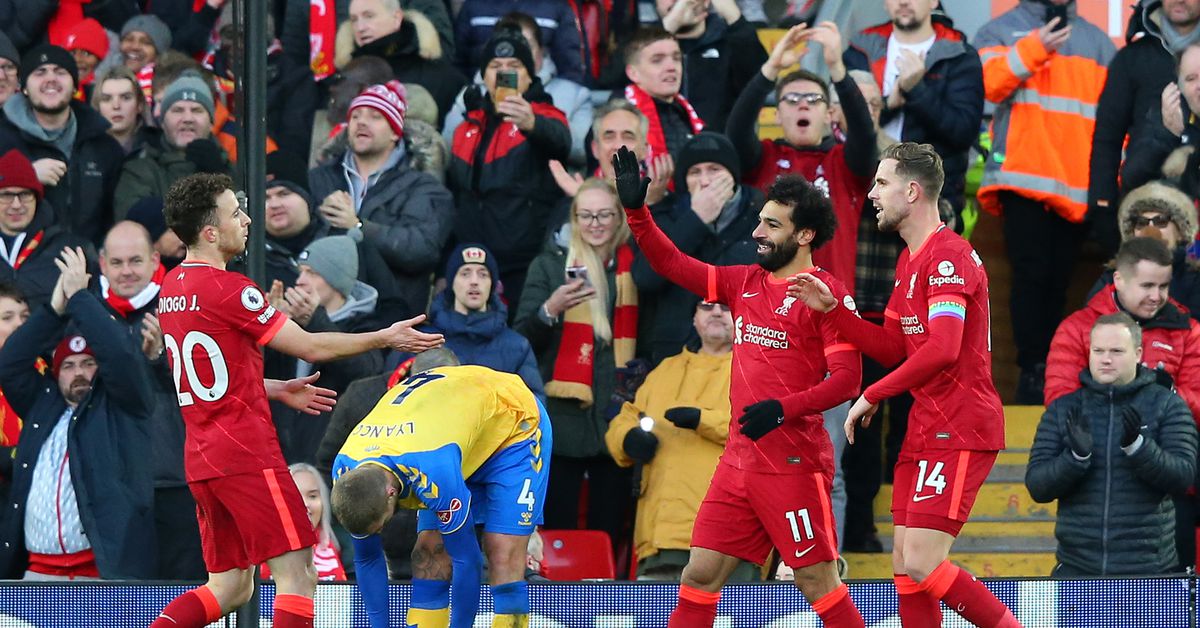 Liverpool welcome Andy Robertson back to the team after his minor injury away on international duty. Ibrahima Konaté partners with Virgil van Dijk in the center of defense, and Klopp fields what is probably his strongest midfield: Jordan Henderson, Fabinho and Thiago Alcantara.

It took no time at all for Liverpool to set the mood for this match. Two minutes in and Diogo Jota scored Liverpool’s first goal. Robertson and Sadio Mané combined down the left, and Robertson provided a smart cut back on the byline to Jota who slotted it home.

Southampton attacked down the other end after a misstep from Thiago, but Alisson bravely dived into the fray to bat the ball away.

Mane had a second goal called offside by a hair and 20 minutes in, it remains a one goal game.

Liverpool pushed and pushed and pushed, until finally it’s Jota again with another simple tap in. Henderson and Salah do the work down the right side this time, and Salah slides it across the face of goal right to Jota, who only needs to turn his foot to direct it into the open goal.

Five minutes, Thiago said, “LOL you thought I could only do that once?” as he glided through Southampton’s box and rifled a left-footed stunner into the back of the net.

Liverpool should have made it a solid four goals going into halftime as the front three made a break with only one defender to contend with. However, Salah’s pass was too heavy and it rolled harmlessly out of play.

The Reds began the second half as dominantly as they ended the first, swarming forward with alarming and devastating force, clearly aiming to add to the tally.

Mané acquiesced to the Kop’s cheeky chants to shoot, nearly getting a fourth into the top far corner. However, the resulting corner kick got the job done just as well. Trent Alexander-Arnold’s delivery found van Dijk, who was mysteriously wide open. He didn’t even need to use his height, scoring instead with his feet.

Southampton got their best chance of the game on the other end, but Konaté came through, throwing his body in front of the ball and blocking it with the power of his abs alone.

Klopp had the luxury of comfortable, early changes with the score insurmountable for Southampton. That’s one way to maintain your team’s fitness. It was Thiago off first for Alex Oxlade-Chamberlain on 59 minutes, and then the captain subbed off for his vice-captain as James Milner came on 67 minutes in.

73 minutes in, Robertson nearly gifted Jota his hat trick, but the Spaniard couldn’t quite get his toe on the end of it, so the score remained 4-0 with a quarter-hour remaining.

Oxlade-Chamberlain came to play, throwing himself into the game with gusto and waking up a Liverpool team that had looked about ready to rest a few moments before.

Klopp’s final change gave Jota the hook before he could bag his hat trick. In his place was Takumi Minamino with 10 minutes of the 90 remaining.

From the second minute on, the result was never in doubt. Liverpool dealt another heavy blow to their opponents in a fun and engaging match.