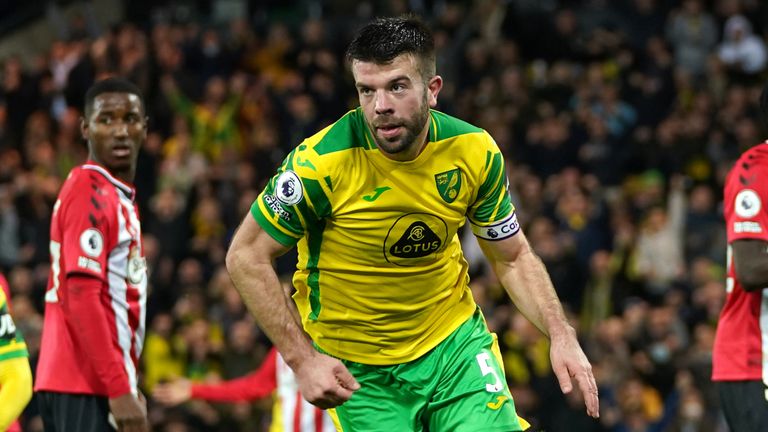 Goals from Teemu Pukki and Grant Hanley earned Norwich a 2-1 win over Southampton at Carrow Road in Dean Smith's first game in charge.

Skipper Hanley rose highest at the back post with 11 minutes remaining to complete the turnaround and lift the Canaries off the bottom of the Premier League table.

It is the first time in 33 Premier League games that Norwich have fallen behind and gone on to win a game.

Pukki's near-post header had pulled Norwich level on seven minutes after Che Adams (4) found space in the box to find the bottom corner for Saints.

Southampton dominated proceedings before the break and remain 13th despite the defeat, while Norwich move above Newcastle into 19th, still three points from safety.

Man of the match: Gibson

It was the worst possible start to his reign for Smith as his side's defensive issues were laid bare before he had chance to get comfy in the dugout.

Despite the close attention of Hanley and Max Aarons, Adams was able to wriggle away from the duo and calmly slot the ball past Tim Krul into the bottom corner.

But the Canaries fought back quickly and Aarons made amends. Neat link-up play down the right saw the full-back clip a cross into the near post, where Pukki stopped to head past Alex McCarthy, who should have kept it out.

From then on it was near total domination before the break for Ralph Hasenhuttl's side.

They enjoyed 71 per cent of possession in the opening half hour and were it not for a series of brave blocks from the Canaries' back-line, Saints really could have been three or four goals to the good.

Adams was guilty of missing their best chance as Krul dived to his right to deny the striker after Hanley's slip had left Saints with three forwards against one Norwich defender.

It was, however, a different Canaries side after Smith's first half-time team-talk.

Milot Rashica's low drive was well struck but straight at McCarthy before sub Josh Sargent had a shot blocked when Pukki was free to his right.

That initial Norwich momentum stalled after the hour mark as the game turned scrappy and both sides were guilty of giving the ball away cheaply.

But Norwich continued to push and were rewarded when Hanley climbed above James Ward-Prowse to nod the ball into the floor and beyond McCarthy.

It was a nervy end for the Carrow Road faithful as Saints pressed hard for an equaliser.

They continued to deliver balls into the box only to see Ben Gibson and Hanley continuously clear them.

Sub Theo Walcott thought he had equalised deep into stoppage-time only for his glancing header to fly agonisingly wide of the post.

The scenes at full-time showed there is belief that Norwich can beat the drop under Smith, while Saints were left to rue their lack of a clinical edge in the first half.

Both teams are back in action at 3pm next Saturday with Norwich facing Wolves at Carrow Road and Southampton facing a daunting trip to Liverpool.