Is 'perfect' Jota key for Liverpool?

‘Up there with Mo Salah’ – Liverpool fans blown away by £66.8m star’s Southampton performance

Diogo Jota quick off the mark asLiverpool power past Southampton 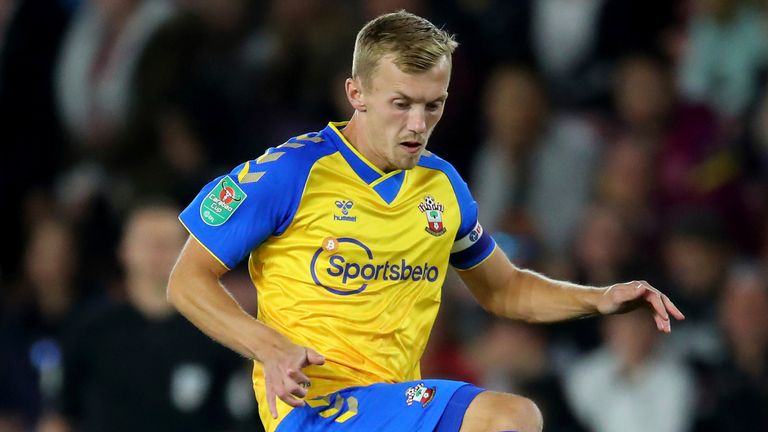 Team news, stats and prediction ahead of Norwich vs Southampton in the Premier League on Saturday; kick-off 3pm.

New Norwich boss Dean Smith has no major injury headaches ahead of the clash against Southampton.

Sam Byram is set to make a major step forward in putting his injury nightmare behind him by playing for the U23s on Friday but the full-back, who has not played first-team football for 20 months, is still some way off a return.

James Ward-Prowse is fit for Southampton despite pulling out of England duty through illness.

Defender Tino Livramento and forward Armando Broja are also available, having missed their stints on international duty as well.

Defender Jack Stephens is the only absentee with a knee injury.

Follow Norwich vs Southampton in our dedicated live match blog. Highlights will also be published on the Sky Sports digital platforms and the Sky Sports Football YouTube channel from 5.15pm on Saturday.

FREE TO WATCH: Highlights from Norwich's win against Brentford

FREE TO WATCH: Highlights from Southampton's win over Aston Villa

Like all three other managerial changes over the international break, this is an almost impossible one to weigh up in terms of predictions and betting angles. All we can use for an argument in this case at this time is gut instinct at whether he'll get Norwich moving in the right direction. I'd be lukewarm on that.

Just from a personal perspective, surely Smith could have benefitted from a bit of time to refresh away from the stresses of management? Out of the frying pan into the fire, springs to mind as the job to get Norwich winning games with their current squad looks a tall order.

Meanwhile, in their last eight games, Southampton have only conceded six goals - a statistic backed up by their expected goals against data (8.43) which has them down as the fifth-best defence in that period. However, during that run, they have faced Manchester City, West Ham and Chelsea - three of the top four attacks in the Premier League. They have been impressive.

The theory that their strong base means just one goal is enough to win a game at the moment worked a charm for the prediction for the Villa game and I see no reason to change tact against a very limp Norwich attack.

BETTING ANGLE: Southampton to win to nil (5/2 with Sky Bet)

Peter Smith is joined by Sky Sports pundit Graeme Souness, and football writers Oliver Yew and Ben Grounds to look ahead to the Premier League weekend.

PART 1 | How will Liverpool respond after their first defeat of the season? Graeme Souness explains why they'll be 'full throttle' against an Arsenal side who, he feels, are still a long way off, despite their recent unbeaten run

PART 2 | Oliver Yew and Ben Grounds look at the contrasting impacts of Jack Grealish and Gabriel Jesus this season, and discuss Fabien Delph's surprise return to form with Everton, ahead of his side's trip to a club he won two Premier League titles with

PART 3 | Harry Kane scored seven goals in two games during the international break but will that translate to the Premier League? We talk Tottenham ahead of Antonio Conte's first home league game in charge, and explain the reasons behind Leeds' slow start.