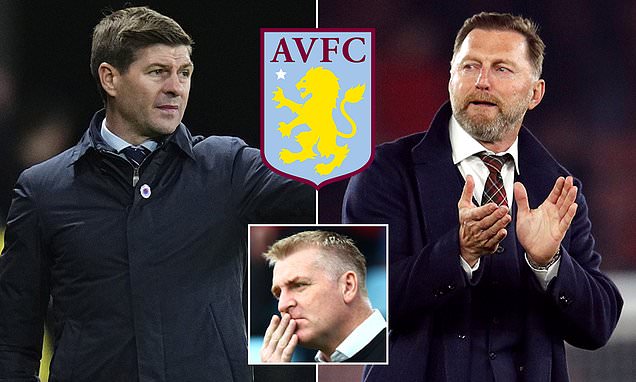 Steven Gerrard is high on Aston Villa's list of possible targets after Dean Smith was sacked on Sunday.

Smith's reign was brought to an end after five successive defeats, the latest of which was at Southampton on Friday. He leaves with Villa 15th in the table.

More managers have been sacked in the Premier League already this season - five - than the entirety of last season and the search is underway at Villa for a new boss.


Gerrard is admired by key figures in the Villa hierarchy, who are impressed by the job he has done at Rangers

Villa are now weighing up a move for Steven Gerrard, who is high on their list of targets

Gerrard is admired by key figures in the Villa hierarchy, who are impressed by the job he has done at Rangers. The former Liverpool and England captain is under contract at Ibrox until 2024.

After taking over at Rangers in 2018, the 41-year-old won the Scottish Premiership title last season, breaking Celtic's sequence of nine in a row, and reached the last 16 of the Europa League.

This term, Gerrard's men are top of the Scottish Premiership of the table, although they were eliminated by Malmo in the qualifying rounds of the Champions League.

Gerrard would not be the only name in the frame with joint owners Nassef Sawiris and Wes Edens, chief executive Christian Purslow – who knows Gerrard from his time as Liverpool managing director from 2009-10 – and sporting director Johan Lange all having input.

Southampton boss Ralph Hasenhuttl is another who has admirers at Villa Park while Lange has a long association with both Brentford boss Thomas Frank and Denmark coach Kasper Hjulmand.

Smith took over as Villa manager in 2018 and led the club out of the Championship and into the Premier League.

Alongside Gerrard is Southampton boss Ralph Hasenhuttl, who is another primary target

They finished 11th last season but have endured a slide in the current campaign - the defeat at St Mary's was their fifth straight loss and their 18th Premier League loss in the calendar year.

Villa CEO Purslow said in a statement on Sunday: 'When Dean joined us in October 2018 our team was really struggling in The Championship.

'He immediately transformed the atmosphere and performances and achieved the ultimate success of leading Villa back to the Premier League within the same season - a rare feat.

'He then secured our place in the Premier League after a tough campaign and took us to a Cup Final at Wembley.

'However, after a good start to last season, this year we have not seen the continuous improvement in results, performances and league position which we have all been looking for.

'For this reason we have decided to make a change now to allow time for a new head coach to make an impact.

'The board would like to sincerely thank Dean for his many excellent achievements, on and off the pitch, during this time.

'Everyone knows how much Aston Villa means to Dean and his family.

'He has represented the club with distinction and dignity - universally liked and respected by everybody associated with Aston Villa – our staff, players and supporters alike. We wish him the very best.'