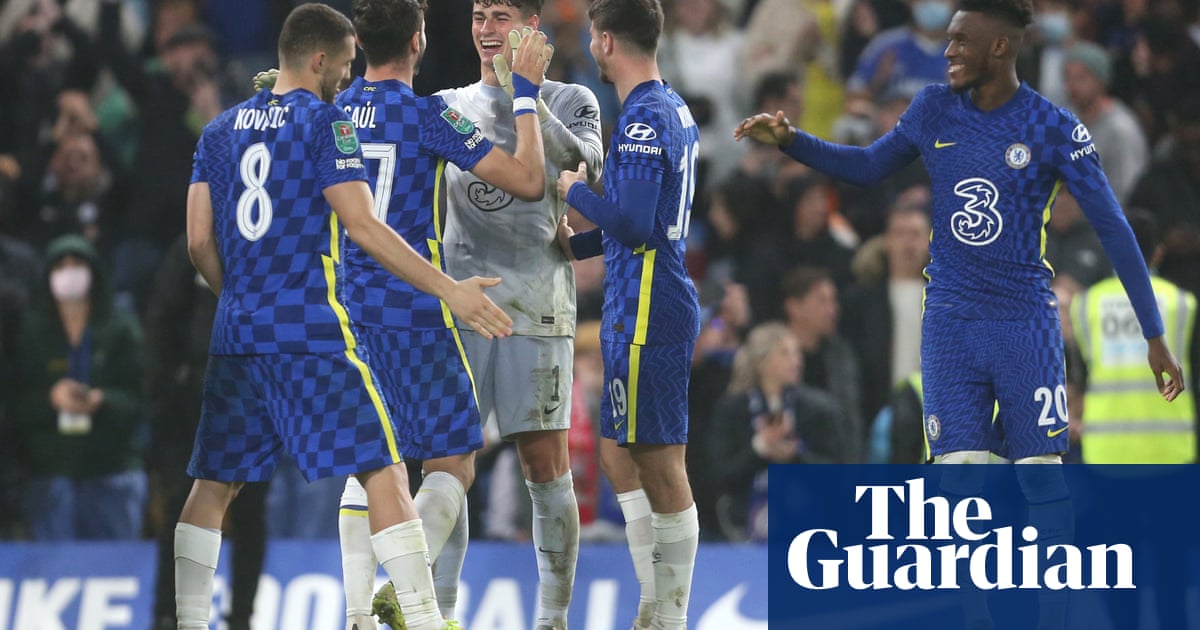 Welcome to the weird world of Kepa Arrizabalaga. It was impossible to know what to make of the £71.6m goalkeeper by the end of this slow-burn Carabao Cup tie. He was at fault when Southampton cancelled out Chelsea’s lead, gifting Che Adams an equaliser, but he went on to make a string of stunning stops in the second half and he finished as the hero after Thomas Tuchel’s side reached the last eight after winning on penalties.

Arrizabalaga is making a habit of inspiring Chelsea in shootouts. This was their third win on penalties this season, following triumphs over Villarreal in the Super Cup and Aston Villa in the last round of this competition, and he was at it again as Southampton faltered at the last, denying Theo Walcott before Will Smallbone’s wayward effort gave Reece James the chance to seal victory.

This was another test of Chelsea’s attacking threat without the injured Romelu Lukaku and Timo Werner. Southampton made it tough during the first half, forcing errors at times with an intense high press, and there were long spells when it was hard to work out how Tuchel’s heavily rotated team were going to score, particularly with Ross Barkley looking slightly surprised to be out there, almost as though he expected someone to come on to the pitch and check if he had the right credentials.

Twice Barkley was played into space down the left wing early on, with room to drive into, only to check back and drain momentum from the attack. It hinted at a lack of confidence from the 27-year-old on his first start for Chelsea since August 2020, although in his defence he was not exactly being helped by the overall lack of flow from the hosts. Hakim Ziyech took a while to settle and the opening period went by without Chelsea creating much from open play, Saúl Ñíguez’s powerful header from a corner the only real moment of jeopardy for the visitors during the early stages.

There were isolated bursts from Chelsea at first. Saúl’s header was turned over by Fraser Forster and there was also a decent run and shot from Havertz, who was unlucky to see his effort from 20 yards swerve inches past the post.

Chelsea needed to provide better service for Havertz, again pressed into action as a false No 9. Havertz spent a lot of the first half battling for high balls with Southampton’s centre-backs, which is not his game. He looked more dangerous when he had a chance to run at his markers, drawing another save from Forster with a good shot.

The pleasing thing for Tuchel was that Havertz was not giving up. The 22-year-old, who has had an inconsistent start to the season, was not intimidated by Southampton’s robust approach. He is capable of looking after himself and he put his underrated physique to good use on the stroke of half-time, rising above Kyle Walker-Peters to meet Ziyech’s corner with a header that drifted low to Forster’s left.

Chelsea, who were also without César Azpilicueta, N’Golo Kanté, Ruben Loftus-Cheek and Andreas Christensen because of minor injuries, just about deserved their lead. A low drive from Stuart Armstrong, struck too close to Arrizabalaga, was a rare moment of incision from the visitors before the break.

The onus was on Southampton to play with more ambition at the start of the second half. There had been hints of vulnerability in Chelsea’s youthful back three of James, Trevoh Chalobah and Malang Sarr, who was often a skittish presence under pressure. Sarr was a weak link on the left and his shaky distribution would soon prove costly, his loss of possession in the 47th minute allowing Walker-Peters to drive into the box before letting fly with a low drive that should have been turned away by Arrizabalaga.

Kepa Arrizabalaga dives to his right to save a penalty. Photograph: Nigel Keene/ProSports/REX/Shutterstock

Instead it was another one of those moments for Arrizabalaga. The goalkeeper, who has struggled since joining Chelsea three years ago, let the shot squirm through his legs and Southampton were level when Adams scrambled the loose ball home.

Now it was a proper contest. Desperate to redeem himself, Arrizabalaga plunged to his left to push a bouncing effort from Adam Armstrong away. At the other end Havertz danced through, only for Forster to deny him.

Tuchel responded, replacing the disappointing Ziyech with Mason Mount and bringing Ben Chilwell on for Barkley with 23 minutes left. The change saw Callum Hudson-Odoi move forward from right wing-back and Chelsea almost regained their lead when Saúl, putting himself about in midfield on his fourth appearance since his loan move from Atlético Madrid, swept wide from 20 yards.

On the touchline Tuchel, who had Chilwell playing out of position at right wing-back, was gesturing frantically. The away side were making life awkward and in the end Chelsea were indebted to Arrizabalaga, who made stunning saves from Lyanco Vojnovic and Mohammed Salisu.