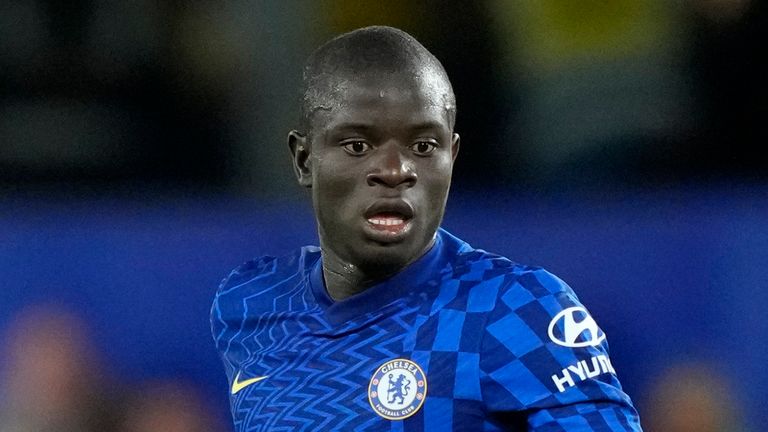 Team news, stats and prediction ahead of Chelsea vs Southampton in the Carabao Cup fourth round on Tuesday; kick-off 7.45pm.

Chelsea midfielder N'Golo Kante missed the Norwich game because of concerns over a slight muscle tightness, but should be involved against Saints.

Thomas Tuchel said: "The (Norwich) game was too early. He did the full training on Friday and after training, he said he feels his muscles a bit tight.

"He went to the physios for massages and for some treatment and he actually wanted to wait until Saturday in the morning to take the decision.

"I said no, it is such an early (kick-off time) game tomorrow, the possibility that it will change is not so high.

Image: Kai Havertz could continue up front for Chelsea

"I said take your time and it was simply one day too early. If the match would have been on Sunday he would have played, so he is fully available for Tuesday and for Newcastle (on Saturday)."

Romelu Lukaku and Timo Werner remain on the sidelines so Kai Havertz could continue as the false number nine.

Southampton forward Mohamed Elyounoussi is set for minor surgery on his hand, which will rule the Norway international out of Tuesday night's Carabao Cup tie.

Elyounoussi played the whole 90 minutes of Saturday's 2-2 draw against Burley, and is set for the procedure on Monday.

Saints boss Ralph Hasenhuttl expects the 27-year-old to be available again for this weekend's trip to Watford.

Image: Mohamed Elyounoussi is set for minor surgery on his hand

"He (Elyounoussi) will have his operation on Monday," Hasenhuttl said. "He needs to have it (to recover from the injury).

"He will miss the Chelsea game, but this is normal. He needs to have two or three days' rest before he can train again."

Southampton will again be without James Ward-Prowse, who is serving the last of his three-match ban following a straight red card in the Premier League defeat at Chelsea on October 2.

On-loan Blues forward Armando Broja scored against Burnley but is not eligible to face his parent club so will have time to rest the minor ankle problem he picked up on Saturday.

Midfielder Stuart Armstrong came on for the closing stages against the Clarets as he continues to build up sharpness following seven matches out with a calf problem.

"He is getting better. It is important that we bring him back at the highest level," Hasenhuttl said. "We need him playing so we will do this, and hopefully Tuesday we will get another chance to show this."

Brazil defender Lyanco, full-back Yan Valery, forward Shane Long and goalkeeper Fraser Forster are among those who could all be in line to feature at Stamford Bridge on Tuesday night.

Highlights from the Carabao Cup third round match between Chelsea and Aston Villa.

Highlights of the Carabao Cup third round tie between Sheffield Utd and Southampton.

Follow Chelsea vs Southampton in our dedicated live match blog. Highlights will also be published on the Sky Sports digital platforms and the Sky Sports Football YouTube channel shortly after the final whistle.