Is 'perfect' Jota key for Liverpool?

‘Up there with Mo Salah’ – Liverpool fans blown away by £66.8m star’s Southampton performance

Diogo Jota quick off the mark asLiverpool power past Southampton

‘That’s proven to be the case’: Shearer sends reminder about Liverpool

Video: Van Dijk scores for Liverpool against his old club and turns win over Southampton into a rout

10 THINGS WE LEARNED as the Premier League returned
Daily Mail 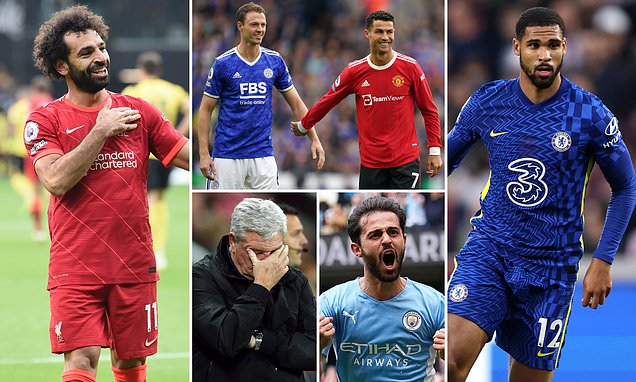 After another languid international break, the Premier League mercifully returned with a sparkling weekend of action. Manchester United slumped to defeat against Leicester, Newcastle's new era started in defeat while there were wins for Liverpool, Chelsea and Manchester City, and more. Here Sportsmail picks out 10 things the weekend's action taught us.

After starting the season in sensational form the question has been posed about whether Mohamed Salah is the best player in the world at present.

But after another mind-boggling solo strike against Watford on Saturday, it's surely time to end the debate.


Jurgen Klopp found it impossible to disagree and looking around world football at present, it is hard to find another player in the destructive run of form Salah has been showing.

It isn't just the close control and deft touches he shows with goals like his against Watford on Sunday and the recent one against Manchester City, it's his all-round play. He had Danny Rose on toast on Saturday afternoon and also provided a sumptuous assist for Sadio Mane's opener.

Two big games are ahead of Liverpool this week - away to Atletico Madrid in the Champions League followed by a trip to Old Trafford. If Salah's form continues on the current trajectory, this time next week there will no hiding Salah's greatness.

Brentford were sized up as a banana skin for Chelsea going into the weekend's fixtures after their impressive start to life in the Premier League. An opening-day win over Arsenal and a gripping 3-3 draw with Liverpool gave Chelsea all the warning they needed.

Thomas Tuchel's men emerged victorious with a 1-0 win but the spoils belonged to goalkeeper Edouard Mendy, who produced a stunning display - particularly in the second half - to keep a clean sheet as hosts Brentford dominated the European champions.

'He has made that difference, if you think of Kepa [Arrizabalaga] in goal for Chelsea when Frank [Lampard] was there, it was a big problem, they were conceding too many goals,’ Neville said.

Jonny Evans made a much-anticipated return for Leicester against Manchester United and showed exactly what Brendan Rodgers has been missing in his absence.

In his first appearance since September 22 in the EFL Cup against Millwall, Evans was a resolute presence at the heart of the Foxes defence for the 88 minutes he was on the pitch before being forced off with cramp.

But Evans returning was a welcome sign considering Northern Ireland manager Ian Barraclough warned that the 33-year-old needs to consider managing a foot issue for life away from the game.

'It's worrying for everybody really, whether that's myself, Leicester or Jonny himself,' he said. 'He has not only got to think about his foot for the rest of his career but for after football as well.'

Nemanja Matic was restored to Manchester United's midfield for the trip to Leicester as Ole Gunnar Solskjaer looked to add some steel to his side. But the Serbia midfielder toiled at the King Power Stadium and struggled to repel Leicester's pressing and free-flowing attack.

United's failure to halt Leicester isn't something that is solely down to Matic but it is emblematic of a wider problem in Solskjaer's ranks - something Gary Neville alluded to in his post-match remarks.

'I love them as players those five, but having them all in the same team there's not enough work horses. There's a reason that Darren Fletcher, John O'Shea, Nicky Butt, Tom Cleverley, Park Ji-sung and Owen Hargreaves got a game at United over the years.'

Continuing the theme, when all is good at United, Ronaldo will inevitably be front and centre for praise considering his relentless scoring ability. But as we are seeing now, when things go wrong scrutiny will fall at his feet as well.

There were no heroics from the Portugal star at the King Power Stadium as United tried to get back to winning ways in the Premier League. Criticism has centred on his low off-the-ball work-rate and how that impacts the rest of the team looking to cover for the the 36-year-old. Especially when they ship four goals.

But writing Ronaldo off is a dangerous game, particularly at such a tentative stage of the season. United host Atalanta in the Champions League this week before fierce rivals Liverpool head to Old Trafford - a game that would be ripe for Ronaldo to silence his critics once again.

The uncertainty around Raheem Sterling's long-term Manchester City future was a big talking point ahead of the weekend's fixture involving the champions.

Pep Guardiola responded by throwing the England man into the starting line-up but he failed to take his chance and was inadvertently upstaged by his Portuguese team-mate Bernardo Silva, who scored in the 2-0 win over Burnley.

Sterling could see a clear example in Silva for how to get back into Pep's good books. Silva was linked with a move away from City throughout the summer after falling down the pecking order but he fought for his place and again demonstrated on Saturday just how important a figure he could be, especially with City lacking an out-and-out No 9.

A 3-2 scoreline was perhaps a bit flattering for Newcastle against Tottenham, even though they went 1-0 up after only two minutes.

Tottenham maintained a firm grip over Newcastle as they fought back to surge into a 3-1 lead by half-time and, despite Eric Dier's late own goal, recorded an important three points on the road.

They now sit fifth, level on points with Brighton in fourth and are in the mix for the top four, albeit at an early stage of the season. The next three games of West Ham, Manchester United and Everton will be a far more accurate barometer of where Spurs are at compared to beating lowly Newcastle, though.

Another thing Tottenham's win showed is how much Newcastle need a new boss. It was a stay of execution for Steve Bruce to oversee his 1,000th game as a manager at the weekend and it is a case of when, not if, the axe will fall.

Crushingly for Bruce and Newcastle, Sunday's match was 28th time Toon have dropped points from winning positions at home since 2019-20, most of any team in the Premier League.

It's a damning statistic, and the longer Bruce stays the more toxic the atmosphere at St James' Park gets. Surely the new owners need to act fast.

It was another disappointing day for Newcastle boss Steve Bruce - his 1,000th as a manager

Southampton finally got their first win of the season with a 1-0 victory against Leeds at St Mary's. Armando Borja struck his first goal of the season to clinch a vital three points for Ralph Hasenhuttl's outfit.

It is a surprise it has taken Southampton this long to win. They produced encouraging displays in draws with Manchester United and Manchester City, while drawing against West Ham is a respectable result.

In the coming weeks, Southampton take on Burnley, Watford, Aston Villa and Norwich in the league - so don't be surprised to see them climb further up the table.

After an indifferent season on loan at Fulham. Ruben Loftus-Cheek is back in the fold at Chelsea and looks to be finding his feet again.

Edouard Mendy was Chelsea's stand-out performer in the win at Brentford but Loftus-Cheek rightly gained plaudits for his midfield display as well. He is undoubtedly an extremely talented player, with all the ability to be a Premier League regular even at a club such as Chelsea.

He said: 'I'm enjoying all my time on the pitch. (Deep midfield) is not somewhere I have played a lot in my career. I started deep but with different managers I've just moved up.

Arsenal were second best for most of the evening against Crystal Palace, but eventually had the fighting spirit to snatch a 2-2 draw.

Mikel Arteta's side are now five matches unbeaten in the Premier League and there are plenty of encouraging signs with testing games coming up against Leicester, Aston Villa and Liverpool.

Captain Pierre-Emerick Aubameyang leads from the front, Alexandre Lacazette can make an impact, Emile Smith Rowe and Nicolas Pepe are always a threat and Aaron Ramsdale will not be fazed by a rare blip for the second Palace goal.

But there were still lessons to be learned from the inexperienced members like Albert Sambi Lokonga, who was dispossessed for the second goal, not that experienced team-mates such as Thomas Partey were anything to go by.

Arteta admitted after the game that such instances can occur with such a young team, but he will hope his team are fast learners after yet another reminder of the gap between them and the top sides against the south London outfit.