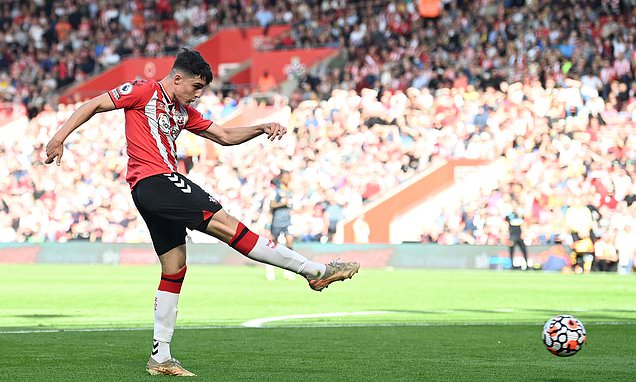 Tino Livramento has opened up on a ‘crazy’ eight weeks that have seen the 18-year-old rise to the challenge of marking superstars such as Jack Grealish and Paul Pogba.

The Southampton right back had not made a professional appearance before Ralph Hasenhuttl threw him in for his Premier League debut at Everton just a fortnight after leaving boyhood club Chelsea in August.

But Livramento has earned rave reviews with a series of stellar displays — most notably against the two Manchester clubs — and he could make his England Under 21 bow in Slovenia on Thursday as the youngest member of new manager Lee Carsley’s squad.

‘The (Southampton) manager said he would give me the opportunity when we were discussing what was best for me,’ Livramento said.


‘I thought that would be in a few cup games or coming on as a late sub when we’re winning or whatever. It’s been a crazy couple of months and I haven’t had time to take in what has happened.

‘I feel like it is better like that. It is all well and good talking about it, but until you get tested and come out of your comfort zone a bit, you don’t see how you really are as a player. It can only serve you well if you stand up to it.’

Livramento, a season-ticket holder at Stamford Bridge, joined Chelsea’s youth set-up aged eight and won the club’s academy player of the year in May.

He turned down a new deal, with Saturday’s 3-1 defeat his first competitive game at Chelsea’s home. ‘It felt a bit weird being on the other side,’ he added.

‘Leaving was never going to be easy. I feel if I’d stayed there this wouldn’t have happened as quickly as it has.’