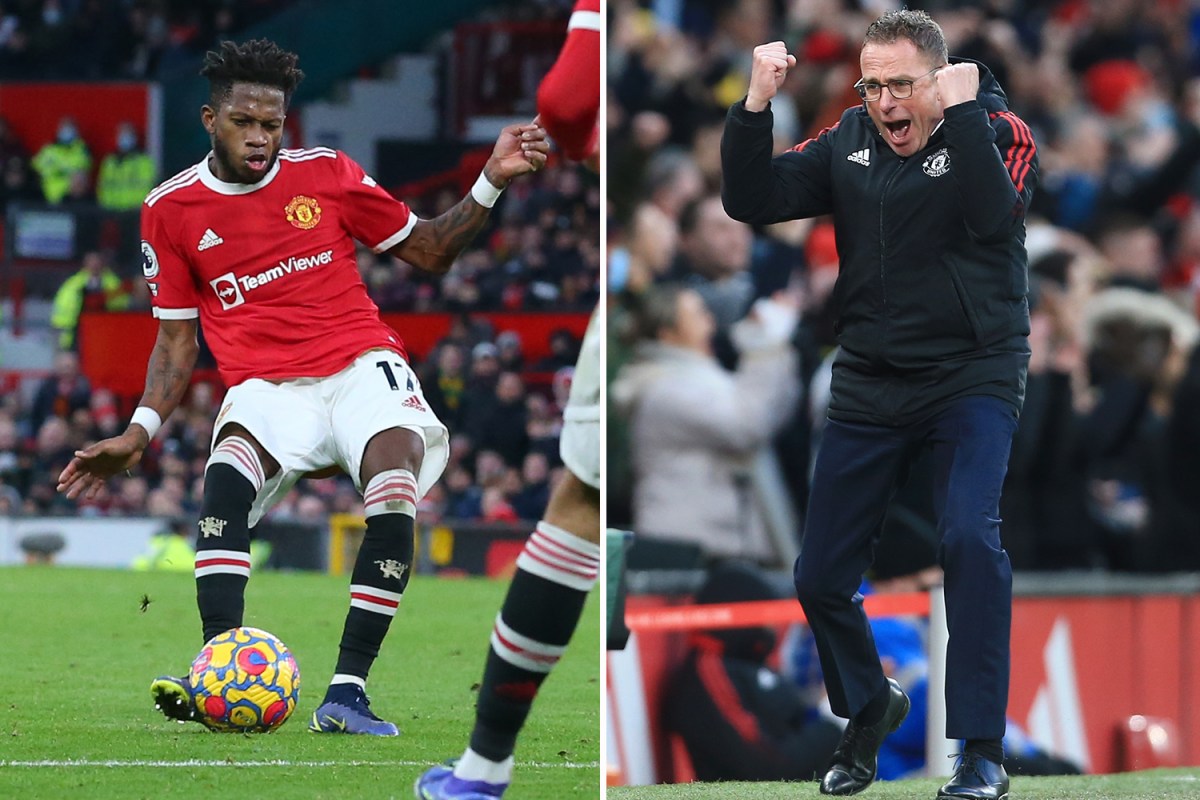 AS match-winner Fred left the field at the final whistle, he saw a Manchester United fan holding a placard asking for his shirt.

The Brazilian, 28, looked slightly surprised and embarrassed but obliged by handing it over.

Rangnick guided a new-look United to victory in his first game as interim managerCredit: Getty

The understated midfielder is not used to being the hero of the hour.

But the signs are he will be a key part of the Ralf Rangnick revolution, just as much as the big stars around him, due to his aggression and work-rate.

Fellow Man Utd midfielder Bruno Fernandes said: “Fred has these moments — one shot per year! He deserves the praise.

“He works a lot and people don’t really talk about him.”

The Old Trafford faithful were talking about him as they made their way home last night though, even if he was the unlikeliest of match winners.

Goals are few and far between for the Brazilian, although he does now have two in his last 12 league games.

That is as many as he got in his first three seasons with the Red Devils, when he totted up 76 appearances.

Just after 8.30pm on Thursday, nobody would have thought the former Shakhtar Donetsk man would end the week as the toast of the club.

It was then that he inadvertently trod on the ankle of keeper David de Gea, leaving him on the floor in agony on his own goalline.

Instead of trying to cover, he compounded the error by standing with his arm in the air as Emile Smith Rowe’s shot flew in.

United were a goal down to Arsenal in pantomime circumstances — and at that moment Fred was very much the villain of the piece.

It would have been easy for his head to drop, but he did nothing of the sort.

Half an hour later he teed up the equaliser for Fernandes with a great pass.

Then he won the penalty which finally gave United the points after a clumsy tackle by Martin Odegaard.

Not content with that, he also made a crucial late block to preserve the win.

It was a performance which told you a lot about a player’s character. On Sunday, in the start of a new era at the club, he picked up where he left off.

The inclusion of Fred and Scott McTominay has often brought raised eyebrows and groans from United fans.

But new manager Rangnick picked the duo in his first line-up and, at the defensive base of a 4-2-2-2 formation, they did not let him down.

Even so, the German would not have expected the £52million man to step up and become a match-winner.

But that was exactly what happened, just as the clash with Crystal Palace seemed to be petering out into a disappointing draw.

Diogo Dalot and substitute Mason Greenwood teed it up and Fred, with his wrong foot, looped a curling shot over keeper Vicente Guaita.

His team-mates piled on him and Fred celebrated with a little dance — once he got over the initial shock.

It was a beautiful goal with his weak right foot

New boss Rangnick was as happy as he was surprised, saying afterwards: “I had to ask my assistant coach if that was Fred’s right foot.

“I thought he could only shoot with his left. I’m happy for him, it was a beautiful goal with his weak right foot.”

Fred himself admitted: “I’m left-footed but sometimes I shoot with the right.

“It was a good ball from Mason and I just looked for goal. The most important thing was to get the win and a clean sheet in the first game of a new coach.”

United are unlikely to rely on Fred for goals every week.

But interim boss Rangnick has made it clear how he wants his team to play — and to do it they will need some players to do the dirty work.

He added: “He is a fantastic player, together what he did with McTominay this is what you need for this kind of football.

“If you play with intensity on the front foot, very proactively, with four offensive players ahead of him, it’s highly important to have players who are disciplined and aggressive.

“Both Scott and Fred are perfect for that, overall when the other team is in possession. I am very happy for him and the whole team congratulated him for the goal.”

Team-mate Dalot, who played a key role in the goal, described his Brazilian pal as an 'underdog' after the game.

The old saying goes that everyone loves them — and it appears Rangnick certainly does.