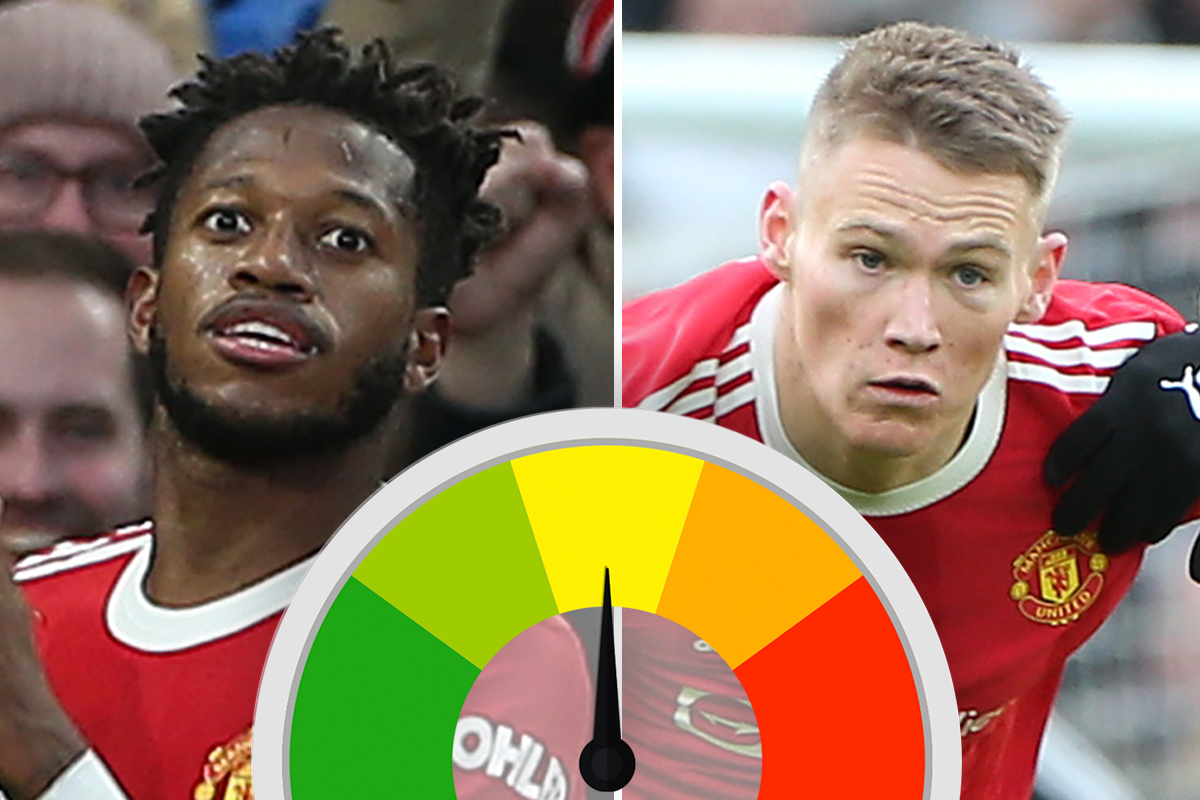 Fred was superb in the middle and capped his performance with the winning goal but his midfield partner Scott McTominay did not have his best afternoon.

Fred was outstanding in centre-midfield and even scored a rare goal to seal the 1-0 winCredit: Getty

Scott McTominay has had much better afternoons in a Man Utd shirtCredit: Getty

United flew out the blocks in the first-half and already looked a different side under Rangnick as they pressed aggressively and played at a much higher tempo.

They had 67 per cent possession and 12 shots before the break, but only two were on target.

Diogo Dalot - who was also excellent - had the best chance at the end of the half but put his left-footed effort over the bar.

However, United fans seemed much happier with what they were seeing from their side as they went in 0-0 at the break.

United's tempo dropped slightly in the second-half but they still had the lion's share of the play - though they struggled to convert that into clear cut chances.

But Mason Greenwood was introduced late on and he laid on a ball for Fred to bend one into the far left corner to nick the three points on 77 minutes.

Fred worked tirelessly in midfield and was rewarded with a goal

And here's what SunSport's William Pugh thought of the Red Devils' individual performances.

Absolute spectator in the first-half as United kept Palace pegged back and limited them to just two shots on target before the break.

Both stops were bread and butter.

Did well to make himself big and put Jordan Ayew off as the Palace man fluffed the biggest chance of the game and put wide from four yards out in the second 45.

Will be pleased with his first home clean sheet of the season.

Did nothing to suggest he should lose his place in the side.

Should have scored with a bending left-footed effort in the closing stages of the first-half after a neat one-two with Scott McTominay.

Nothing serious to contend with but was equal to everything thrown at him in the air and did the basics well on the floor.

Booked for a cynical challenge on Zaha late on as Palace chased an equaliser.

Victor Lindelof didn't have loads to do but stood up to the little Palace offered going forwardCredit: Getty

Seemed keen to play more direct balls out from the back as opposed to the slow build up seen under Ole Gunnar Solskjaer.

Looked a little flustered on occasion with the ball at his feet but will be happy with the clean sheet and delivered a few incisive passes that set United on the attack.

Received lengthy treatment after a clash of heads with Odsonne Edouard in United's penalty box late on.

The stricken centre-back was pictured with blood pouring from the deep gash on his eyebrow as medical staff attended to him on the floor.

He played the remainder of the match with a black bandage wrapped around his noggin.

Harry Maguire needed treatment for a cut on his eyebrow late in the gameCredit: Getty

Looked more than comfortable up against Jordan Ayew and Jeffrey Schlupp as he continues to deputise for the injured Luke Shaw.

Fizzed in a cheeky but vicious direct free-kick with little more than 20 minutes to go which grazed the top of the crossbar.

Worked hard and covered a lot of ground but the game seemed to pass him by.

There were also some sloppy moments when he did get on the ball.

Could be the first victim of the Rangnick era if United can find a suitable replacement in January.

Booked for a clumsy challenge on Edouard with 10 minutes to go which kind of summed up his afternoon.

Had a chance to score after 23 minutes but his left-footed effort was blocked by James Tomkins and went out for a corner.

Looked busier and more active than his midfield partner McTominay.

Work rate and closing down were excellent and the Brazilian was solid on the ball.

Scored a superb looping right-footed effort from 20 yards to put the Reds 1-0 up with 13 minutes to go.

Lovely finish to seal a deserved 1-0 win and the Brazilian more than earned his moneyCredit: Getty

Lively in a free role early on and nearly made it 1-0 via a deflected effort around the half-hour mark but it went just over.

Seemed to enjoy the freedom the inverted winger position gave him and looked dangerous when linking up with Marcus Rashford.

Will feel hard done by to be hooked just past the half-hour mark.

Keen to drop deep and pick up the ball as he sought to affect the game.

Also looked more dynamic, mobile and full of energy as he tried to adopt his new manager's style.

Blazed a right-footed effort from distance over the bar just after the break.

Looked dangerous as he tormented Tyrick Mitchell when he got on the ball and ran at the left-back.

Lined up for a trademark free-kick after 11 minutes but blazed it over.

Was full of energy and looked hungry in the early stages.

Fell off a little after the break but played 90 minutes and looks set to play a huge part under Rangnick.

Cristiano Ronaldo looked well up for the clash as he buzzed around Crystal Palace's boxCredit: Reuters

Dragged a left-footed effort wide from the edge of the box just moments after coming on. Should have done better.

Laid on the ball for Fred to score from.

Didn't have much of an impact.

Received a huge cheer as he came on with just minutes to go.