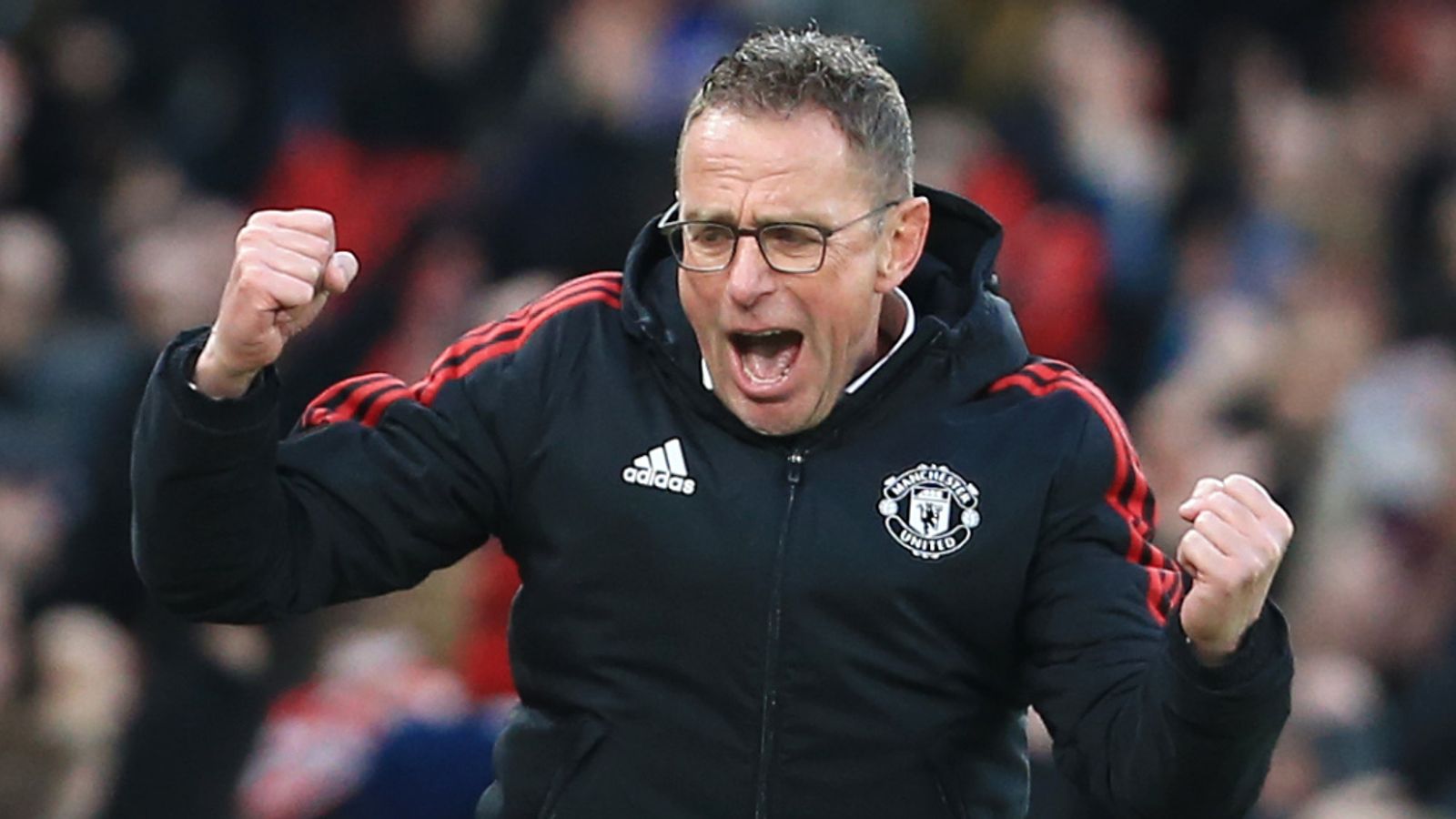 Ralf Rangnick admitted he was "positively surprised" by the speed with which Manchester United adapted to his methods to secure Sunday's 1-0 victory over Crystal Palace.

Having watched Thursday's 3-2 triumph against Arsenal from the stands, Rangnick was on the Old Trafford touchline for the first time when Patrick Vieira's men came to town.

And Rangnick's reign began in victorious fashion thanks to an unlikely match-winner, Fred, whose stunning right-footed effort, together with a first home clean sheet of the season, saw the German seal three points on his debut.

"I'm more than happy," Rangnick told Sky Sports. "First of all, most importantly, we won the game. Second, we had a clean sheet, third I think we no doubt deserved to win, because we had control of the game.

FREE TO WATCH: Highlights from Manchester United's win against Crystal Palace in the Premier League

"But it was clear that you cannot play the whole game, 90 minutes, on this kind of intensity level. But, still, even after that we had control of the game. Second half, we started the game well and, in the end, we deserved to win.

"I am more than happy with the clean sheet. Beautiful goal with this weak right foot from Fred. It was about gaining control and we had control most of the time of the game."

Rangnick had precious little time to work with the players given the swift turnaround, but United played on the front foot from the outset with impressive intensity and energy.

Image: Rangnick became the sixth German to manage in the Premier League and the first German to win his first game in charge in the competition

The coming days provide the chance to build momentum and underline his philosophy to the players, who have taken onboard instructions in a way that has impressed the interim manager.

"To be honest, I was positively surprised by the physical state, intensity and performance of the players," the United boss added.

"Not only did we play in the late kick-off on Thursday, but we also had two days fewer than Crystal Palace to recover. I didn't expect us to play at that level after only one-and-a-half training days together with them.

"It's always easier to build on things when you're successful. I want the players to believe in this kind of football. We continue in this direction, produce further clean sheets, and get better at creating chances ourselves. There is still space for improvement but today was more important for me to see how they played against the ball."

Image: Fred has scored twice in 12 Premier League matches this season, as many as he scored in 76 appearances in his first three seasons at Man Utd

On match-winner Fred, Rangnick admitted he did a double take after the Brazilian found the net with his unfavoured right foot.

"I had to ask my assistant coach if that was Fred's right foot, I could not believe it," Rangnick said. "I thought he could only shoot with his left.

"Fred is a fantastic player. What he did with (Scott) McTominay against the ball today, this is what we need. I'm happy for him."

What did Rangnick change?

"The system, for a start. Manchester United were set up in a 4-2-2-2 formation out of possession, with Rashford partnering Ronaldo up front, although all their attackers had licence to interchange positions when United had the ball.

"There was also, as expected, an increased emphasis on pressing high up the pitch. United won possession in the final third 12 times in total, according to Opta - that's nearly twice as many as they have managed in any other Premier League game all season.

"The full-backs provided the width, with Alex Telles in particular given licence to bomb forward. It seems he may have an important role to play under the new boss.

"The side's performance tailed off somewhat in the second half but Fred's superb strike made the difference and United fans can feel pretty encouraged by what they saw overall."