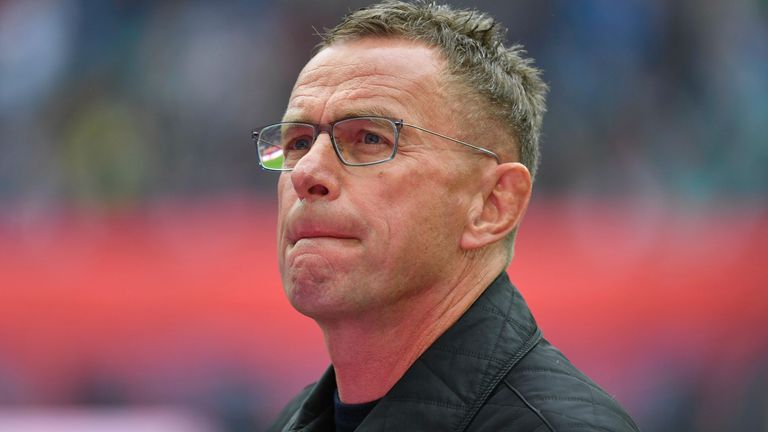 Team news, stats and prediction ahead of Man Utd vs Crystal Palace in the Premier League on Sunday; kick-off 2pm.

United interim boss Ralf Rangnick has some injury issues to check on ahead of his first match in charge of the club this weekend.

Paul Pogba (hamstring) and Raphael Varane (thigh) remain absent for Sunday's visit of Crystal Palace, who their former right-back Aaron Wan-Bissaka will hope to face after a hand injury ruled him out against Arsenal.

Edinson Cavani has been out for a month and Luke Shaw has missed the last three matches after receiving a blow to his head. Nemanja Matic was absent against the Gunners due to a hamstring niggle and there has yet to be any update on Cristiano Ronaldo's fitness after he was substituted late on Thursday.

Palace right-back Joel Ward will miss the trip to Old Trafford due to a one-game suspension after he received his fifth booking of the season during Tuesday's 1-0 defeat at Leeds.

Eagles boss Patrick Vieira is also without James McArthur (hamstring) while Nathan Ferguson continues to build up his fitness having not made a first-team appearance since January, 2020 due to numerous injury issues.

Joachim Andersen will be assessed by Palace after he has sat out the last two matches due to a problem with his hamstring that forced him out of international duty with Denmark in November.

Follow Man Utd vs Crystal Palace in our dedicated live match blog. Highlights will also be published on the Sky Sports digital platforms and the Sky Sports Football YouTube channel after full time.

FREE TO WATCH: Highlights of Manchester United's win against Arsenal in the Premier League.

FREE TO WATCH: Highlights from Leeds' win against Crystal Palace in the Premier League.