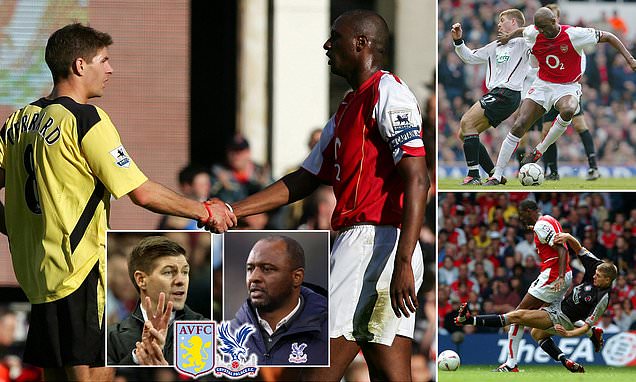 They were born four years and 2,788 miles apart, but the careers of Patrick Vieira and Steven Gerrard seem destined to be forever intertwined.

Saturday's clash between Crystal Palace and Aston Villa pits the two Premier League greats against each other in the Selhurst Park dugout, opening a second chapter in a story which saw them go toe-to-toe on 15 occasions in the 2000s when they were considered among the best midfielders on the planet.

Twelve of those battles came when Vieira's Arsenal met Gerrard's Liverpool, with both men being the metaphorical heartbeats of their respective teams.


Vieira did not become Arsenal captain until 2002 and Gerrard Liverpool's until 2003, but both were established as leaders for their clubs well before then. That neither man was ever substituted in their 12 collisions speaks volumes of their importance to two of England's biggest clubs, and both hold legendary status at the Emirates and Anfield respectively for life and beyond.

Steven Gerrard and Patrick Vieira shake hands after their last Liverpool v Arsenal match against each other, in the Premier League clash at Highbury in May 2005

Their styles were similar too, certainly in the early years of their clashes. Gerrard eventually became more of a No 10 under Rafa Benitez and then a deep-lying playmaker later in his career, but in his early years he was a marauding, tough-tackling, box-to-box midfielder - just like Vieira.

When they went head-to-head, your eyes were drawn to both of them - and theirs to each other. Neither man was afraid of a challenge and neither man backed down. It made for thrilling viewing.

Given that Liverpool did not finish above Arsenal in the Premier League table in any of the six seasons that Vieira and Gerrard went head-to-head, with the Gunners winning two titles in that time, it may come as a surprise to learn that Gerrard had the better record when the two met as players.

In fact, the Englishman had something of a curse over the Frenchman in the first few years of their rivalry. Perhaps because Gerrard, at 6ft 1in, was probably the only midfielder in the early 2000s who could match 6ft 4in Vieira's physicality. The smaller Roy Keane, of course, found other ways to combat his old foe.

Vieira lost his first four matches up against Gerrard, and it took until their sixth meeting to record his first win. In fact, Arsenal performed better without Vieira when playing Gerrard's Liverpool, winning the two matches against them that he missed through injury or suspension. They also won the only games Gerrard missed against them, in 1999 and 2005.

The most famous of those early wins for Gerrard was the 2001 FA Cup final, when Michael Owen's magnificent late double snatched victory from the jaws of defeat for Gerard Houllier's side after Arsene Wenger's team had dominated the match. There was also a memorable 4-0 win at Anfield in December 2000 in which Gerrard scored.

Vieira finally started to get to grips with Gerrard from 2002, losing just one of his last eight matches against Gerrard's Liverpool, including a 4-2 win for the Invincibles at Highbury in April 2004. Later that year, Vieira scored in vain for Arsenal in a famous win for Liverpool at Anfield, with Neil Mellor scoring an injury-time long-range winner.

In all from their 12 matches against each other for Liverpool and Arsenal, Gerrard won five and Vieira won four. Gerrard also had the slight edge the three other times he faced Vieira.

Vieira exacted revenge on Gerrard for the 2001 FA Cup final defeat as two late Zinedine Zidane goals saw France come from behind to beat England 2-1 at Euro 2004, though Vieira's Inter Milan lost both legs of their Champions League last-16 tie against Gerrard's Liverpool in 2008.

Their early managerial careers have taken different paths, with Vieira cutting his teeth at New York City and Nice, while Gerrard took his first job at Rangers, but there are again unescapable similarities between the two.

Vieira had a period of learning the ropes as a youth coach at Manchester City under Roberto Mancini and Manuel Pellegrini, while Gerrard had a similar, albeit shorter, stint doing the same at Liverpool with Jurgen Klopp.

They have also managed nearly the exact same amount of professional matches at this point. Gerrard, now 41, has taken charge of 194 matches to 45-year-old Vieira's 192. Gerrard's overall win-rate is far better at 65 to Vieira's 40.6, however that is to be expected given the clubs they have managed.

What is more pertinent is that both managers have similar philosophies, with an emphasis on possession and pressing. Vieira has been impressive in how he has turned Crystal Palace from a defensive team into a front-foot team in such a short space of time, while Gerrard looks for his teams to play a similarly fluid and high-tempo 4-3-3.

We might not get the blood and thunder we saw from Vieira and Gerrard in the 2000s when their teams meet on Saturday, but this is sure to be the first of many managerial collisions between two Premier League legends.