Crystal Palace have a long way to go before they can win trophies, says Vieira 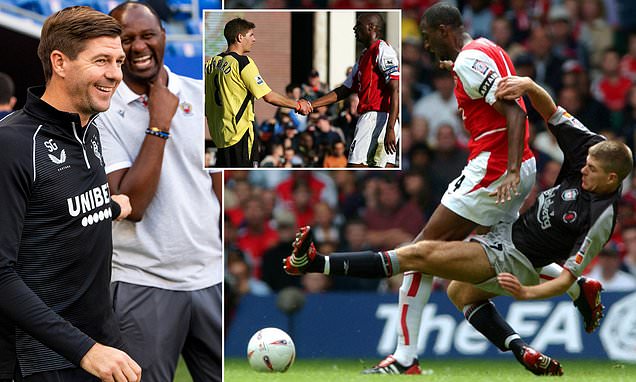 Steven Gerrard and Patrick Vieira enjoyed many fierce battles on the pitch, and on Saturday they will renew their rivalry on the touchline when Aston Villa take on Crystal Palace.

The pair were involved in some memorable hard-hitting contests when Liverpool faced Arsenal in the early 2000s.

Both men are now in the early stages of their Premier League managerial careers and if the fixture at Selhurst Park is anything like their epic on-field encounters then a similarly bruising match is expected.

However, It won't be the first time they've faced each other in the opposite dugout.


Gerrard said in his pre-match press conference: 'I faced him before in a pre-season friendly when he was manager at Nice and I was up at Rangers.

'He's a man I've got a lot of admiration and respect for. First and foremost as a player, I had many battles against Patrick.

'He was a top, top footballer and one of the toughest battles I ever faced in terms of being a player.

'I expect the same to be the case from the side. I know he's a winner, a competitor, he's started the job off at Crystal Palace really well.

'He's changed the style, I must say Roy Hodgson did a fantastic job prior, but he seems to have built on that good work, gone a lot younger in his recruitment, difference in their style and he's got his team flying high at the moment.

'It's going to be a tough test we've got a lot of respect for the fixture coming up ahead but we want to build on our good work from this week as well.'

Liverpool legend Gerrard got the better of Vieira when Rangers faced Nice back in July 2020, with Jermaine Defoe and Jamie Barjonas scoring in a 2-0 victory.

Vieira left Nice in December 2020 and returned to management in the summer replacing Hodgson.

The Frenchman has made a promising start to life at Crystal Palace, with the club sitting tenth in the league after 12 games.

Gerrard only made the jump from Rangers to Aston Villa earlier this month, but he got off to a winning start with a 2-0 victory against Brighton.

The win ended a barren-run of five consecutive defeats which led to Dean Smith getting the sack.