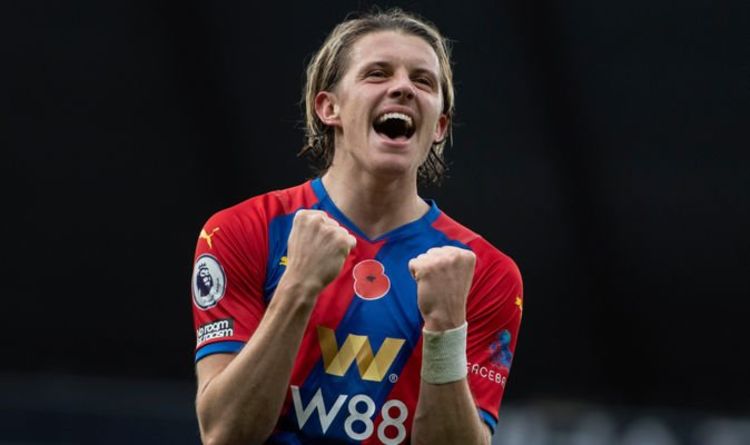 Chelsea manager Thomas Tuchel has a tough decision to make over whether to thrust Conor Gallagher into his starting line-up when the midfielder returns to Stamford Bridge. Gallagher is currently enjoying a loan spell at Crystal Palace and has been in imperious form across the capital.

The 21-year-old came through the Chelsea academy and had successful loan spells at Charlton, Swansea and West Brom before his temporary move to Palace this summer.

After missing the Eagles’ opening game of the season against his parent club, Gallagher has been an ever-present under Patrick Vieira and has helped the team to a mid-table position.

The youngster has scored four Premier League goals this term and contributed two assists as Palace have been one of the surprise packages of the top-flight.

The south Londoners have lost just two of their first 12 Premier League matches and Gallagher has been a real menace to opposition defences since moving to Selhurst Park.

Gallagher’s spell at Palace is set to finish at the end of the season and the player will return to Chelsea.

Chelsea loanee Conor Gallagher has been in imperious form for Crystal Palace this season (Image: GETTY)

And former Blues midfielder Steve Sidwell says that Gallagher has his heart set on eventually forcing his way into the Chelsea team.

“I remember Rio [Ferdinand] telling me he did an interview with him [Gallagher] not long ago,” Sidwell said.

Chelsea have an abundance of talent in their midfield department and have stormed to the top of the table after winning nine games this campaign.

“As a team-mate I would have loved to play with him. It is a pleasure to know him - I am super happy that it has worked out so well. He needs to keep his feet on the ground.”

But Tuchel has refused to be drawn on whether Gallagher will break into the Chelsea first-team when he returns to west London.

“It is too early to talk about that in public before we talk with Conor himself and what his goals are,” Tuchel continued.

“This will happen in the summer as we all agreed to the decision that we wanted to send him to Palace. He saw a possibility for him.”