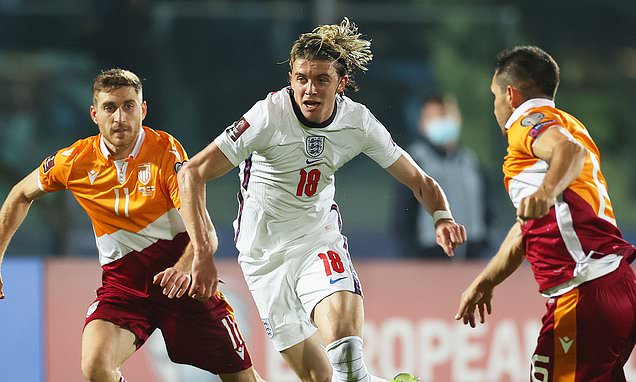 Chelsea refused to include an option to buy Conor Gallagher when entertaining loan offers for England’s latest debutant last summer.

Gallagher made his senior international debut in the 10-0 demolition of San Marino on Monday night to cap what has been an excellent start to the campaign on loan at Crystal Palace.

A number of clubs, including Newcastle and Leeds, were keen on taking Gallagher on an initial loan that also included a clause allowing them to buy the youngster at the end of the season.

But Sportsmail has learned that Chelsea were insistent the terms of any deal for Gallagher would not include an option to permanently buy the 21-year-old as they plan to bring him back to west London next season and integrate him into Thomas Tuchel’s senior squad next season.


Palace eventually won the race to sign Gallagher with the midfielder now emerging as one of the breakthrough players of the season at Selhurst Park.

A collection of key goals is now growing, including a memorable strike at the Etihad stadium

But there is an acceptance at Palace, who also enquired about the possibility of inserting an option to sign Gallagher permanently, that they stand little chance of landing him on a full-time basis once his loan deal expires.

Instead, the midfielder is expected to return to Stamford Bridge and be given an opportunity to break into the Blues’ first team.

The fact Gallagher has now made his senior England debut has further complicated the hopes of number of top-flight clubs keen on signing him permanently with his value likely to have soared as a result of his new status as an international player.

If it emerges that Gallagher does not have a long-term future at Chelsea, the Blues could look to sell next summer.

Whether Chelsea ultimately decide to keep Gallagher or not, his value continues to skyrocket

When asked whether he felt he was good enough to break into the Chelsea team after his England debut, Gallagher said: ‘I am just thinking about this season with Crystal Palace, doing as best I can for them.

'That’s most important for me now. If I continue to do well with them and carry on scoring a few goals there’s a chance to be in this England team.’