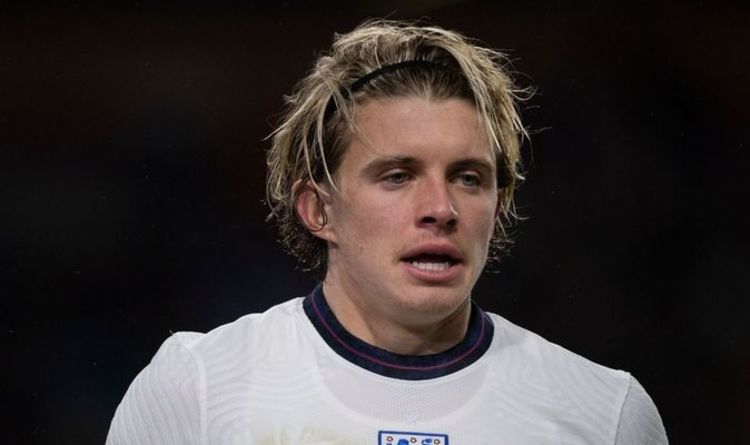 Gareth Southgate is set to reward Conor Gallagher with a senior England call-up following his electric form at club level with Crystal Palace. Eyebrows were raised when the attacking midfielder missed out on the initial announcement given that he is currently one of the Premier League's most in-form players.

Gallagher has been excellent since moving to Selhurst Park on loan from Chelsea in the summer, becoming a key fulcrum in Patrick Vieira's side.

He has found the net four times so far in 10 Premier League outings and the purple patch will now be rewarded with a senior call up, according to reports.

Southgate has had his fair share of absentees during this international break after several members of his squad were forced to withdraw for the World Cup qualifiers with Albania and San Marino.

Marcus Rashford, Luke Shaw, James Ward-Prowse and Mason Mount were all unable to join up with their team-mates at St George's Park.

Conor Gallagher is set to be called up to the Crystal Palace squad (Image: GETTY)

Declan Rice was unwell, meaning he had to drop out of the two matches.

Southgate decided not to replace the West Ham midfielder, while he brought in Arsenal youngster Emile Smith Rowe as additional cover in attacking midfield.

Gallagher is now understood to have received the nod with an announcement expected on Sunday.

England can seal their place at the World Cup finals with a win against the minnows, who they beat 5-0 to open their qualification campaign in March.

Palace loanee Gallagher was expected to remain with the England Under-21s after featuring in the 3-1 in over Czech Republic.

But now he will get the chance to impress with the senior camp and there is every chance he could get minutes if the Three Lions are able to build a lead.

Pundit Paul Merson recently questioned Gallagher's omission, claiming he should have been named in the squad.

"Conor Gallagher should be in the England squad and it’s shocked me that Gareth Southgate has snubbed him," Merson told the Daily Star.

Conor Gallagher's fine form with Crystal Palace has been rewarded with an England call up (Image: GETTY)

"He’s been one of the best players in the country this season for Crystal Palace and I don’t think he could have done any more to earn a call-up.

"Chelsea loanee Gallagher deserves to be in there and if he hasn’t got a call-up up now I don’t know how he ever will.

"He affects games every single time he plays and he’s completely and utterly on top of his game. I think he’s really unlucky.

"Southgate could have picked him and sent a message to every young English player that if you’re playing well you will get a chance.

"But he hasn’t, and that sends the wrong message for me – especially as people like Declan Rice have pulled out."