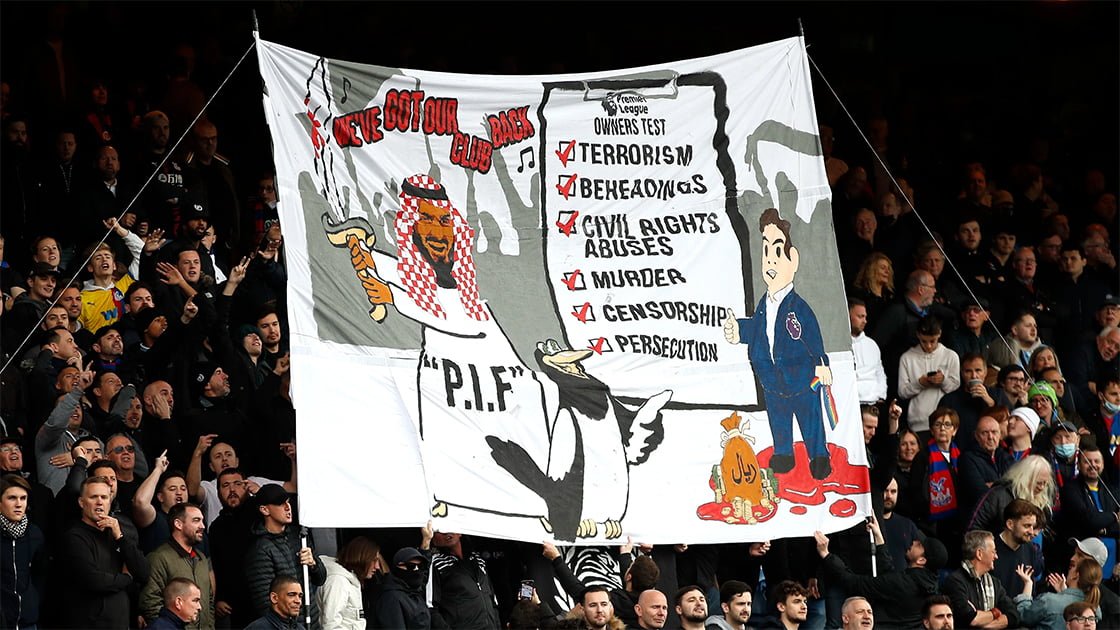 Crystal Palace v Newcastle United saw plenty of action and controversy on the pitch during a feisty 1-1 draw.

Following the final whistle though, there was further controversy flagged up.

With the Croydon Metropolitan Police releasing this brief statement:

“On Saturday 23 October police received a report of an offensive banner displayed by Crystal Palace fans.

“Officers are assessing the information and carrying out enquiries.

“Any allegations of racist abuse will be taken very seriously.”

The potentially offensive banner (see above), obviously a reaction to the takeover of Newcastle United.

“To give the thumbs up to this deal at a time when the Premier League is promoting the women’s game and inclusive initiatives such as rainbow armbands, shows the total hypocrisy at play and demonstrates the league’s soulless agenda where profits trump all.”

Now on Monday (25 October 2021) the Met Police have announced that they have concluded their investigation into that potentially offensive banner at Selhurst Park:

“On Saturday 23 October, a member of the public contacted the police to raise concerns about a banner displayed at the Crystal Palace vs Newcastle match at Selhurst Park.

“Following an assessment, officers have concluded that no offences have been committed.

“No further action will be taken.”

I was guessing this would almost certainly be the case but I had a laugh at those going on in such a ridiculous way when reacting to the Police simply saying they were looking into whether the banner broke any law(s).

That is a world of difference to actually finding that the banner equalled an offence had been committed. The Police are duty bound to at least have a look, if a member of the public approaches them and flags something up.