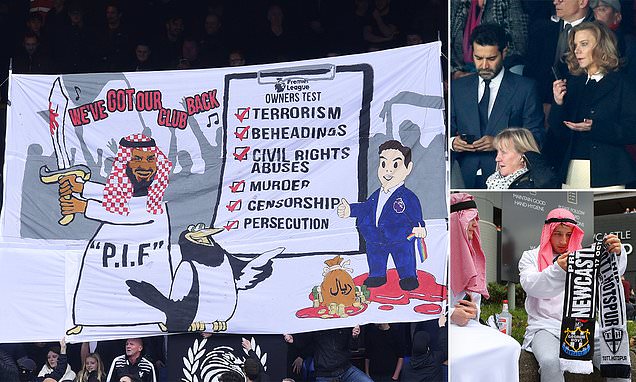 Fury has today erupted over a Met Police racism probe into a banner opposing the Saudi takeover of Newcastle United.

The banner accused the Saudi regime, backers of the multi-million-pound takeover, of murder, terrorism and beheadings and took a swipe at the Premier League’s owners’ and directors’ test.

‘The banner is the type of cutting political satire that the UK can rightly be proud of,’ Nicholas McGeehan, director of human rights consultancy FairSquare, said.

‘The Crystal Palace fans who made it deserve nothing but credit. We should not be repressing our hard-fought rights and freedoms to spare the feelings of the Saudi state or the Newcastle fans who desperately want to believe that criticism of the Saudis’ human rights abuses is racist.’

‘It clearly attributes the abuses to the Saudi state and not to Saudis in general,’ McGeehan said.

‘But if people are going to be offended when people satirise that in a creative way, there is nothing for the police to be investigating.’

Police said they had received complaints the mural was ‘offensive’. ‘Officers are carrying out enquiries,’ said Croydon Metropolitan Police. ‘Allegations of racist abuse will be taken seriously.’

The Holmesdale Fanatics, a Crystal Palace fan group, condemned Newcastle's recent takeover and displayed the banner in the stands during the match between the two sides.

Palace and Newcastle played out a 1-1 draw at Selhurst Park, as the visitors earned their first Premier League point of their new era, but it was off the pitch where the most notable action occurred.

Newcastle's Saudi-led owners were the subject of a protest from a section of Palace fans, who slammed the Premier League's decision to allow the takeover to take place by drawing attention to the actions of the Saudi regime.

The statement said: 'The Saudi led takeover of Newcastle has rightly received widespread condemnation and anger. It is clear the P.I.F is a front for the tyrannical ruling Saudi regime and by endorsing this, the Premier League has made a mockery of its own 'Owners and Directors' test.

'The Premier League has chosen money over morals and in green lighting this deal, has done business with one of the world's most bloody and repressive regimes.

'A country controlled by fear where women are second class citizens, same-sex partnerships banned, journalists silenced, imprisoned or killed and 'dissidents' brutally persecuted now has a foothold in our national game.

'To give the 'thumbs up' to this deal at a time when the Premier League is promoting the women's game and inclusive initiatives such as rainbow armbands, shows the total hypocrisy at play and demonstrates the League's soulless agenda where profits trump all.

'Newcastle, as a team, is now being used to sportswash the blood from the hands of a corrupt governance and deluded supporters should consider that reality when singing of 'getting their club back'.

'We are lucky to live in a country where we can display a banner such as this without repercussion. Many in Saudi Arabia wish they were afforded those.'

Earlier in the week, Newcastle urged fans not to wear Arabic dress to matches, after hundreds of fans did just that at St James' Park against Tottenham in the first match following the takeover.

It came as it emerged Kick It Out were planning to meet Newcastle and encourage them to ask fans not to wear tea towels on their heads as a way of celebrating their new owners.

The club said: 'Newcastle United is kindly asking supporters to refrain from wearing traditional Arabic clothing or Middle East-inspired head coverings at matches if they would not ordinarily wear such attire.'

However, they have now backtracked on that in a new statement, suggesting that the club's new owners have instead seen fans' attire as a warm welcome and a way of showing support.

'The fans who have celebrated by wearing culturally traditional clothing, including head coverings, have been part of that welcome,' the club said.

'Those who wish to support the club by wearing appropriate culturally-inspired clothing should feel free to do so as they see fit. We are inclusive to all.

'To reiterate what we said previously, neither the club nor its new owners were offended by attire worn, and appreciate the overt statements of support and acceptance by our great fans.'