Graeme Jones on Newcastle's draw at Crystal Palace: It gives us somewhere to start from
Sky Sports 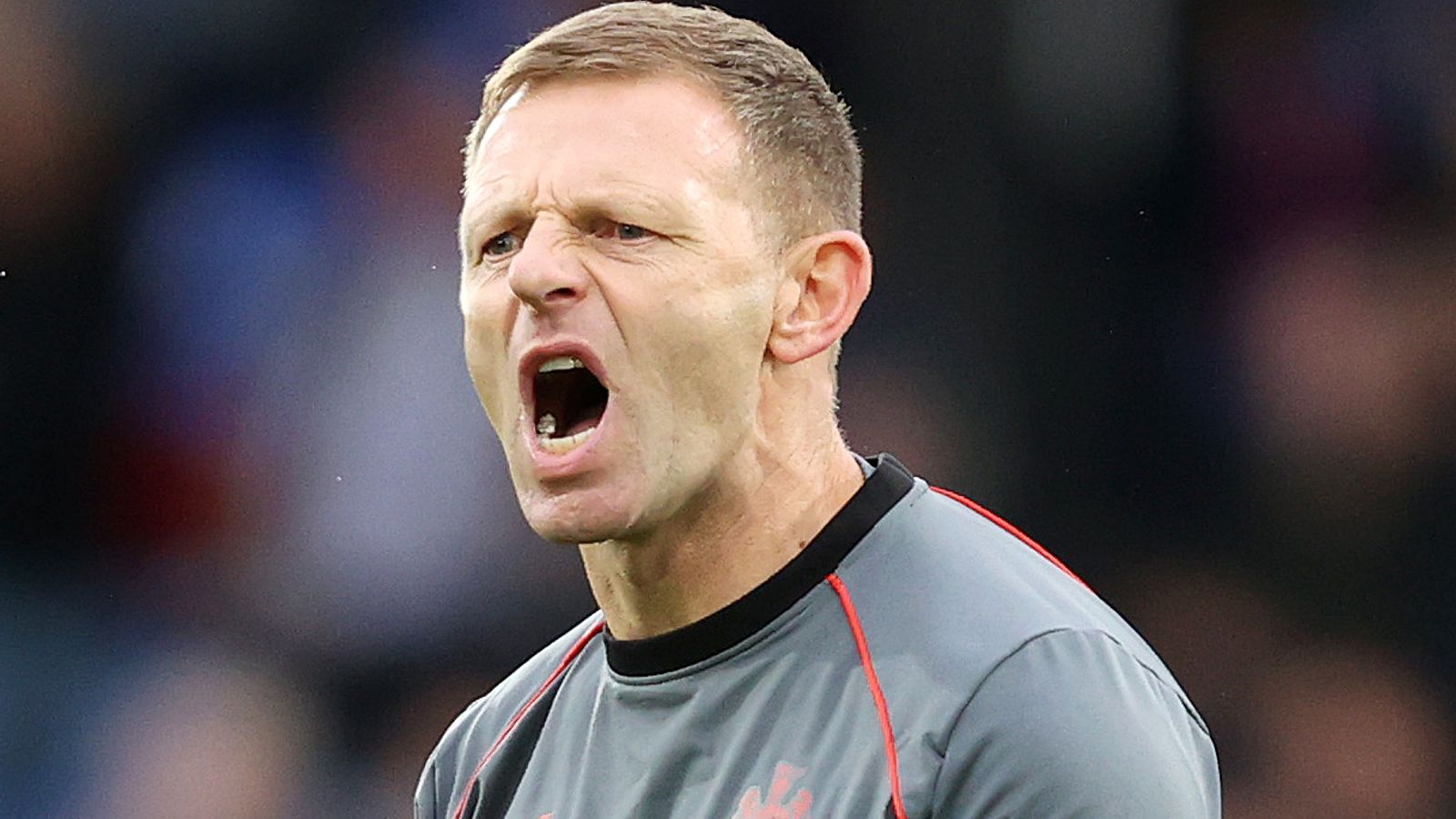 Graeme Jones says he was "pleased" with Newcastle's 1-1 draw at Crystal Palace and gives his side "somewhere to start from".

Christian Benteke gave the hosts the lead at Selhurst Park, but a stunning overhead kick from Callum Wilson secured Newcastle their first points under new ownership.

They survived some late drama too when Benteke's header was ruled out by VAR after Marc Guehi's pull on Ciaran Clark inside the area, drawing their first game since the departure of Steve Bruce last week.

Interim manager Jones told Sky Sports after the game: "I'm pleased we got something out of it. We deserved that for our organisation, understanding and mentality.

"It's far from where I want to be, on the ball in particular. On the turnover, our first pass could be better at times, but it was a solid place to start from. We'll look to build and improve for as long as I'm doing this.

"Overall, I'm really pleased. It was a solid performance, particularly off the ball. On the ball, we need to be better, but that won't happen overnight.

FREE TO WATCH: Highlights from the 1-1 draw between Crystal Palace and Newcastle

"I'm delighted in the end with a draw because it gives us somewhere to start from, but we wanted to win the game."

There was also praise for goalscorer Wilson too, with Jones adding: "I'm delighted for him.

"It's his talent, that's what he's got. His quality, you can't give that to people. The most impressive thing with Callum is that he usually does it on a matchday, training can be hit and miss at times, but when it matters, he's got that mentality to come up grab the moment."

Despite Bruce's departure, Newcastle remain winless in all competitions this season and are still 19th in the Premier League table with just four points.

However, Jones believes the former manager would have been equally as pleased with the performance on Saturday.

"For me personally, Steve (Bruce) has been a miss," the interim coach said. "He had that experience where he could oversee everything, he'd seen it before.

"But as I've said previously, he knows football than anybody. You have to move forward and I think he would have been proud of the account we gave of ourselves today."

Vieira 'frustrated with another draw

The Eagles dominated the first half, but were wasteful with their chances - Benteke, in particular, found a number of golden efforts pass him by.

Manager Patrick Vieira told Sky Sports: "There is a lot of frustration, of course. I think we played well enough and created enough chances to win the game. But again, we're a bit disappointed with the result at the end.

"I think the goal they scored, it was a really good finish, but when we look at the way the ball bounced and the way he took his chance, it was well played for them but unlucky for us.

"It's really difficult to be satisfied because what is important is to win football matches. We know where we are and where we want to go, we want to build and we still need to improve.

"But there is a really good process in place because when we play a game like today, we created enough chances, the team played really well.

Vieira also provided an update on the fitness of Eberechi Eze, who is edging closer to fitness after missing the last five months with an Achilles injury.

"He's not ready yet," the manager added. "We will have to be really patient with him because he had an injury that takes time tor recover from. He's feeling well, he'll have full training with the team this week and then we're going to evaluate where he is. But at the moment, it's good to see him on the field, but he's not ready to take part in any games yet."

Benteke: VAR decisions are part of the game

Despite the missed chances, Benteke produced an impressive display up front, and was in an accepting mood when discussing the VAR decision that went against him late in the game.

"It's part of the game," he told Crystal Palace's official club website. "We have to accept it. We had last season a couple of goals where the VAR was for us but today it wasn't. We have to move forwards and keep going.

"I'm not sure [if it was the correct decision]. But from where I was there was no chance for him to play the ball. It's the ref's decision and there's nothing we can do about it.

33 - Since 2012-13 (his first campaign in the competition), Christian Benteke has scored more headed goals than any other player in the Premier League. Loaf. #CRYNEW

"The way we are playing right now, we are creating more chances. The manager gives us the confidence to play and we aren't afraid to reproduce that on the pitch.

"I think we are trying to play as a team. You guys [the media] can see we're trying to link up, trying to play and today I had the chance to score but maybe next week it will be someone else. We are all working for the team and for the same goals.

"We are playing better football and now it's all about being consistent and about how we can finish the game when we have the chance to."

Crystal Palace are on their travels next Saturday when they face Manchester City in the Premier League. For Newcastle, they welcome Chelsea to St James' Park on the same day. Both games kick-off at 3pm.