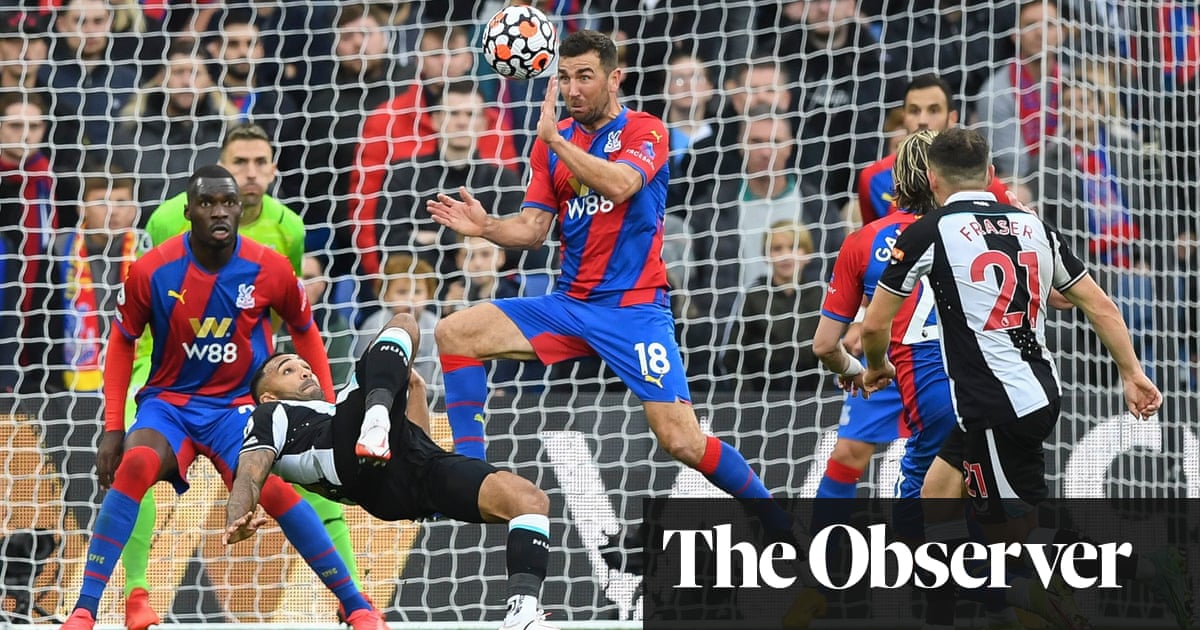 Wilson’s goal secured a 1-1 draw at Crystal Palace in Jones’s first match since succeeding Steve Bruce on an afternoon when home supporters unveiled a banner protesting against the Premier League’s decision to allow the controversial takeover.

But despite their winless run in the league now stretching to nine matches and with Newcastle still in the relegation zone, Jones – who is expected to take charge for next week’s home fixture against Chelsea – believes Wilson can be the player to help them climb the table.

“He’s a unique striker – the best natural finisher I’ve worked with,” said Jones. “But we need to start with that base and have a little bit of defensive solidity in order to allow Callum to perform. Every game will be addressed on its own merits for every match that I’m in charge. But one thing that can’t change is the mentality.”

A banner depicting an image of the club’s new Saudi Arabian owners, PIF, about to behead a magpie as faceless fans in the background sang: “We’ve got our club back,” was unfurled by Palace supporters before the 1-1 draw. As well as the Premier League’s chief executive, Richard Masters, giving a thumbs-up to a bag of money, it also listed offences that human rights organisations say the Saudi regime is responsible for, with a tick next to each one: terrorism, beheadings, civil rights abuse, murder, persecution and censorship.

A statement released by the Holmesdale Fanatics supporters group later said the Premier League had “chosen money over morals” in allowing the takeover, adding that it had “done business with one of the world’s most bloody and repressive regimes … To give the thumbs up to the deal at a time when the Premier League is promoting the women’s game and inclusive initiatives such as rainbow armbands shows the total hypocrisy at play.”

The Leeds chief executive, Angus Kinnear, had also questioned why the takeover was allowed to proceed in his programme notes for his club’s 1-1 draw with Wolves at Elland Road. He wrote: “The media and public have been left debating why the Premier League owners directors test is harder to fail than GCSE PE, but now our real focus should be on how the new owners of Newcastle embrace the values of equality, diversity and inclusion that are core to every club’s membership of the greatest league in the world.

“Simultaneously, there is an opportunity for all clubs to participate in a long overdue review of the rules that ensure the financial and commercial fair play that are central to keeping our league competitive and attractive. After the bitter schisms within the league caused by Project Big Picture and the European Super League we have at least found an issue which unites at least 18 clubs.”

Newcastle released a statement during the first half of the match at Palace, backtracking on the request earlier in the week for supporters not to wear head coverings in tribute to their new owners, adding: “Those who wish to support the club by wearing appropriate culturally inspired clothing should feel free to do so as they see fit. We are inclusive to all.”