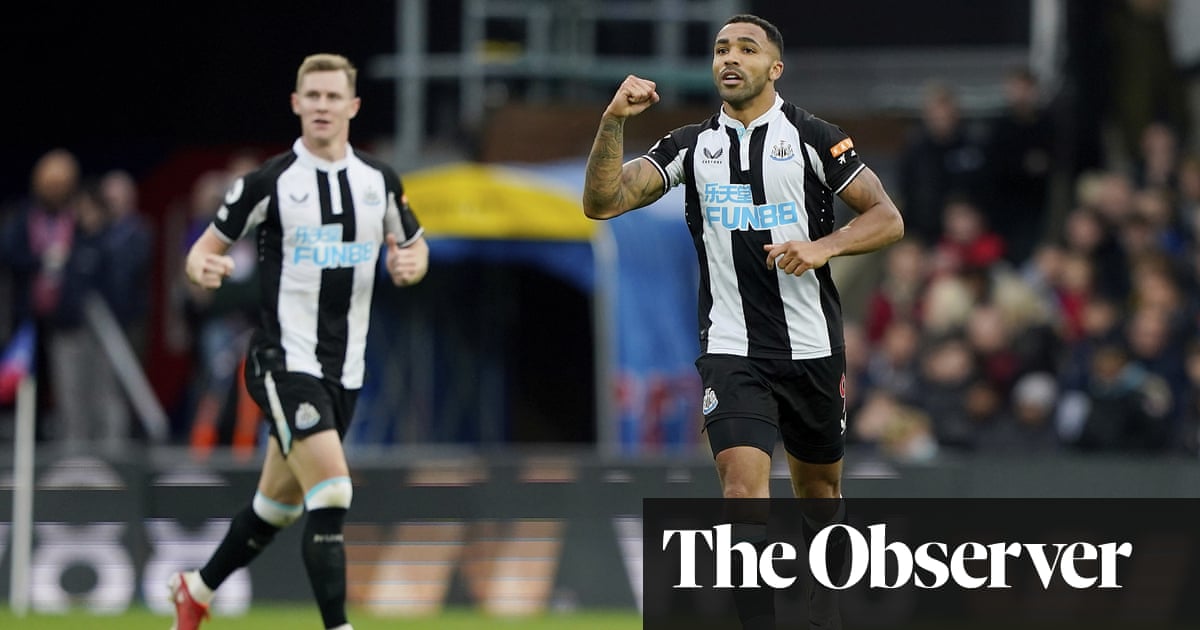 A new face in the dugout and still no win. But at least life after Steve Bruce began on a positive note for Newcastle as Callum Wilson’s spectacular overhead kick rescued a point against Crystal Palace.

Watched on by the director, Amanda Staveley, in the absence of Yasir al-Rumayyan, Newcastle’s non-executive chairman from Saudi Arabia, the interim manager, Graeme Jones, showed just why he has been entrusted with ensuring a smooth transition after Bruce’s departure this week. A solid if unspectacular performance against vibrant opponents who were desperate to turn a run of draws into victories represented a decent start for the 51-year-old from Gateshead, even if he must have been grateful for Christian Benteke’s profligacy and the decision to disallow the Belgian’s late goal that would have sealed the points for Palace.

The boos for Newcastle’s players as they emerged from the tunnel before kick-off and the banner unfurled by home supporters had hinted that the visitors were in for a difficult afternoon. Appearing to show an image of the club’s new owners, Saudi Arabia’s Public Investment Fund, about to behead a magpie as faceless fans in the background sang: “We’ve got our club back”, the banner also listed offences that human rights organisations claim the Saudi regime is responsible for, with a tick next to each one: terrorism, beheadings, civil rights abuse, murder, persecution and censorship.

On the pitch, Jones – who said this week he had been given assurances over his long-term future at the club by the new owners – opted for a defensive approach as he tried to make an instant impression. A former striker who made his name as assistant to Roberto Martínez in various roles and also worked with England during Euro 2020, his only previous experience as a manager came during a difficult season at Luton Town in 2019-20. But Jones, who has been steeped in Newcastle’s history since childhood, knew this was an opportunity to show his credentials.

By contrast, Palace are a few months ahead in their own evolution under their manager, Patrick Vieira, and came into this match in a determined mood after three successive draws that all could have ended in victory. Michael Olise, who impressed against Leicester and Arsenal, was handed his first Premier League start while Wilfried Zaha was deemed only fit enough for the bench.

It took a slice of luck and quick thinking from Marc Guéhi to stop Emil Krafth, one of two changes from last week’s defeat to Tottenham in Bruce’s last match in charge, from giving Newcastle the lead in the 15th minute but Palace’s dominance was obvious otherwise. Benteke somehow contrived to hit a post from Olise’s pinpoint cross soon after, with the combination of Conor Gallagher and Odsonne Édouard a constant menace.

Yet despite managing just 21% possession in the first half, Newcastle managed to restrict the hosts by sitting deep and inviting Palace to attempt to break them down. The plan seemed to be working for Jones. A Newcastle statement released during the first half backtracked on the request for supporters not to wear head coverings in tribute to their new owners, adding that “those who wish to support the club by wearing appropriate culturally inspired clothing should feel free to do so as they
see fit”.

Meanwhile, their team was being put under serious pressure as Palace sought to turn their superiority into goals. An acrobatic effort from Benteke that just whistled over the bar signalled a significant increase in intensity before Karl Darlow was forced into evasive action by rushing out of his penalty area to halt another attack.

It seemed like only a matter of time until Palace found a breakthrough and the goal came courtesy of Gallagher’s tenacity on the edge of the box. The Chelsea loanee eventually found Tyrick Mitchell and his cross was gratefully gobbled up by Benteke. Another brilliant run and cross from Olise allowed him to pick out the unmarked Belgium striker six yards out but his header bounced back off the crossbar again.

But if Palace thought the points were safe, Wilson’s instinctive overhead kick after they had failed to clear a corner suddenly left Vieira’s side back at square one. Staveley and her husband, Mehrdad Ghodoussi, did not hold back with the celebrations in the directors’ box.

On came Zaha after he was forced to miss the draw against Arsenal due to illness, with Olise making way. Once again, their best chance fell to Benteke after a brilliant flick from Édouard, only for him to miss the target when clean through. The decision by the referee, Daren England, to disallow Benteke’s late winner for a foul by Guéhi in infuriated the home supporters but was a welcome sight for a relieved Jones.