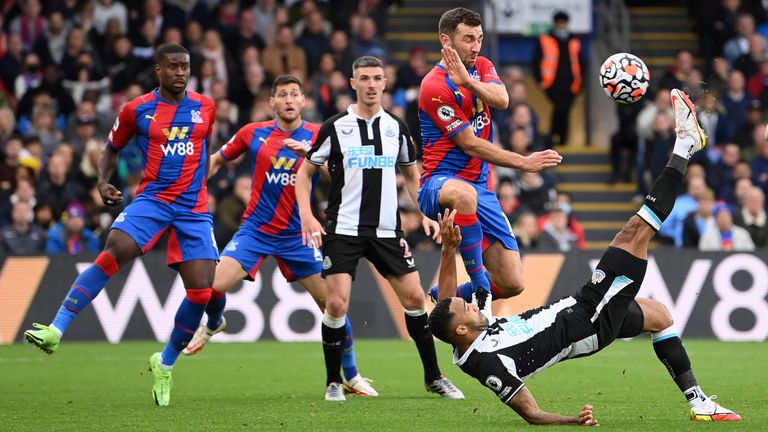 It had been another turbulent week for Newcastle, having dismissed Steve Bruce on Wednesday and placing his assistant Graeme Jones in interim charge for the next two games.

It was a tough assignment at Selhurst Park too, with Crystal Palace unbeaten at home under Patrick Vieira this season. The hosts dominated the first half, but had little to show for it at the break. Christian Benteke had nodded onto the post in the first of a plethora of missed chances.

After another miss early in the second half, Benteke did finally make the breakthrough when he deservedly nodded Palace ahead (56). But their lead lasted less than 10 minutes when an incredible, acrobatic overhead kick from Wilson (65) - similar to another Benteke effort - hauled Newcastle level.

Jones' side looked to have more about them after the goal and arguably had their best spell in attack, but Benteke thought he had won it for Crystal Palace when he again nodded past Karl Darlow in the 87th minute. But VAR ruled it out for a foul, with Marc Guehi guilty of pulling Ciaran Clark's shirt.

33 - Since 2012-13 (his first campaign in the competition), Christian Benteke has scored more headed goals than any other player in the Premier League. Loaf. #CRYNEW

The feisty encounter ultimately ended in the points shared, with Newcastle starting the post-Bruce era with a hard-fought draw. It seems them remain in 19th with four points. Crystal Palace have now drawn their last four Premier League games, and they drop down one place into 15th.

Crystal Palace are on their travels next Saturday when they face Manchester City in the Premier League. For Newcastle, they welcome Chelsea to St James' Park on the same day. Both games kick-off at 3pm.