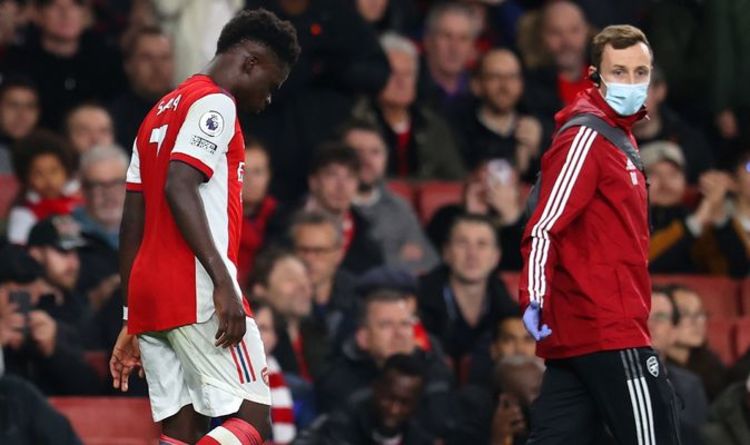 Arsenal winger Nicolas Pepe will have to up his game against Aston Villa with Bukayo Saka a doubt for Friday's Premier League clash. Pepe has struggled to live up to his club-record £72million price tag since signing in 2019, and must grab his chance to impress Mikel Arteta after being branded "very disappointing" by Gunners legend Ian Wright.

The Gunners will be eyeing a fourth win in six top-flight games when they host Villa at the Emirates, having lost twice to Dean Smith's side last season.

But their hopes of avenging those two defeats were dealt a blow when Saka had to be brought off during Monday's 2-2 draw with Crystal Palace after being chopped down by James McArthur.

Asked whether Saka would be available for Friday's game, Arteta said: "I don’t know. See how it evolves.

"He could not continue and he’s a boy who’s pretty tough and he wants to keep playing and he could not carry on."

JUST IN: Ex-Arsenal star Mesut Ozil targeted by Newcastle as they draw up plans

Bukayo Saka is in a race to be fit for Friday's game (Image: GETTY)

The Gunners will miss Saka's energy, attacking thrust and creativity if he doesn't make it, but there are a few ways Arteta can try and fill the void.

Emile Smith Rowe could move over to the left wing in Saka's absence, with Albert Sambi Lokonga coming back into the midfield alongside Thomas Partey and playmaker Martin Odegaard.

Pierre-Emerick Aubameyang could play on the left, with Alexandre Lacazette starting up front as reward for his last-gasp equaliser against Palace on Monday.

Or there could be a rare chance for Gabriel Martinelli - but in either case, Pepe could be set to line up on the right where he has started three of Arsenal's last five league games.