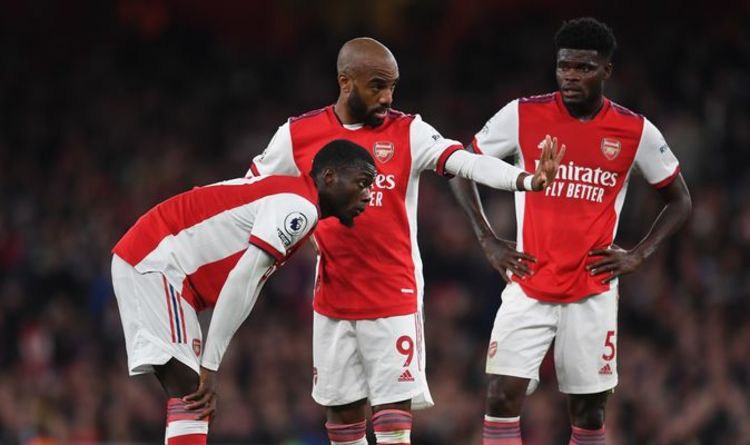 Jamie Carragher has picked out an unseen incident involving Arsenal star Alexandre Lacazette from the Gunners’ draw with Crystal Palace. Mikel Arteta’s side were forced to rely on a 95th minute equaliser from Lacazette to rescue a point and extend their unbeaten run to six games in all competitions.

Pierre-Emerick Aubameyang had put the hosts ahead after only eight minutes, but Palace fought back with Christian Benteke equalising.

Odsonne Edouard then put Patrick Vieira’s men ahead with 17 minutes remaining as they headed for a famous win at the Emirates Stadium.

By the time Edouard had scored, Lacazette had been on the pitch for six minutes, having seen his role under Arteta reduced to that of an impact substitute.

He fulfilled that brief by some distance against Palace, firing in from a rebound to secure a point against Vieira’s men.

Lacazette has made just one start so far this season, in what appears likely to be his final campaign at the Emirates Stadium.

JUST IN: Arteta has the answer to saving Arsenal future staring him in the face

The Frenchman has entered the last year of his contract at the Gunners, with technical director Edu seemingly unwilling to hand him a new deal.

That is despite Lacazette having scored three goals and notched one assist in his five games this term, with only one of those appearances being a start.

One of Arsenal’s biggest problems this season has been their attack, with only three teams having scored less goals than them in the Premier League.

Despite those issues, Lacazette has been continually overlooked when it comes to starts, with his appearances off the bench adding up to just 73 minutes.

Arsenal extended their unbeaten run to six games with the draw with Crystal Palace (Image: Express Sport)Lacazette scored in the fifth minute of added time against Palace (Image: Getty Images)