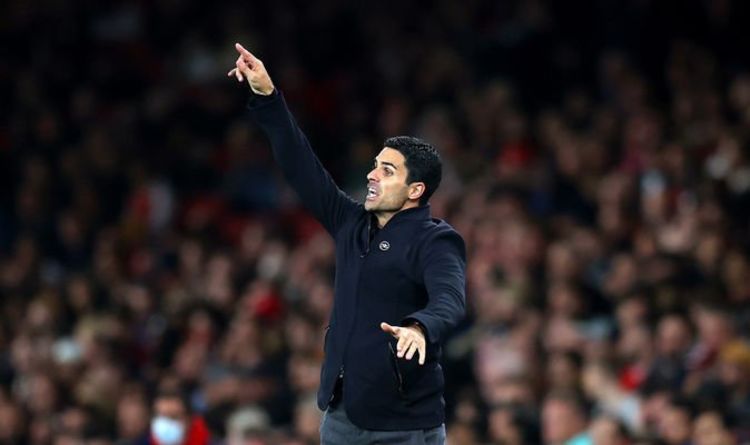 Arsenal needed an injury-time equaliser from Alexandre Lacazette to claim a share of the spoils against Crystal Palace on Monday night. The France international thumped home in the fifth minute of added time after coming off the bench midway through the second period.

The Gunners failed to rediscover their good form of last month and were fortunate to get anything out of Monday’s entertaining encounter.

Boss Mikel Arteta had been named September’s manager of the month following Arsenal’s three consecutive victories before the international break.

But one of his biggest problems was laid bare on Monday night – Arsenal are struggling to win at the Emirates Stadium.

In fact, the Gunners have now tasted victory just 12 times in their last 28 home games in all competitions.

That’s a sorry record for a team who are billed as one of the biggest in Europe.

Arsenal boss Mikel Arteta had one of his biggest problems laid bare in the Crystal Palace draw (Image: GETTY)

If Arsenal can’t improve their home form, they will struggle to secure a European place once again next season.

The Gunners’ performances in front of their own fans is a far cry from the ones they produced under legendary manager Arsene Wenger.

During the Frenchman’s reign, Arsenal were formidable at home and that form helped them secure a Champions League finish in all but Wenger’s final two campaigns at the club.

Last season, the north Londoners suffered four straight home Premier League defeats in the autumn as they were dispatched by Leicester City, Aston Villa, Wolves and Burnley, before they stemmed the tide with a draw against Southampton.

Patrick Vieira admitted he was disappointed to leave the Emirates with only a point (Image: GETTY)

“And then in the second half, when we were again in control, we gave the ball away two times and gave two really cheap goals away.”

Meanwhile, former Arsenal midfielder Patrick Vieira admitted he was disappointed to leave the Emirates with only a point after returning as Palace boss.

“I was really disappointed to concede at the end because the players worked really hard and they deserved those three points,” said Vieira. “I feel sorry for them today.”