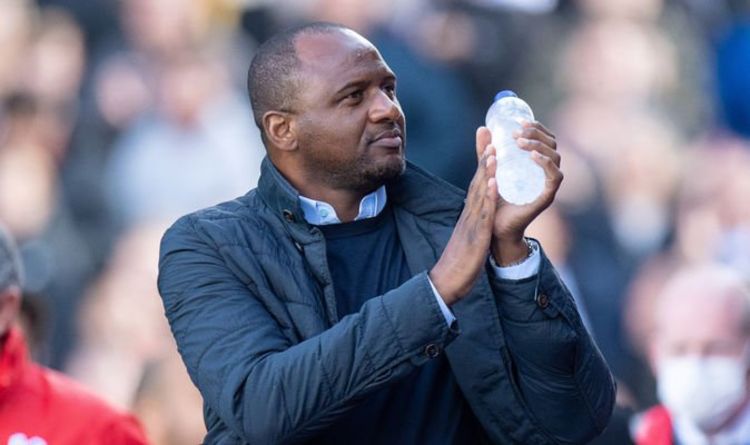 Crystal Palace manager Patrick Vieira endured a tough end to his clash with former club Arsenal on Monday night thanks to a last gasp equaliser from Alexandre Lacazette. However, when the dust settles the Gunners legend may realise that he can have the last laugh in light of Odsonne Edouard’s immediate success.

Arsenal looked on course to scrape another victory after Pierre-Emerick Aubameyang’s opener went unanswered until the second half.

But within 25 minutes, a Christian Benteke and Edouard double turned the game completely on its head and stunned the Emirates into silence.

Edouard’s was an emphatic finish off the crossbar, prompting Gunners fans to put heads in hands as their interest in the Frenchman never came to fruition during the summer.

An extremely late Lacazette leveller rescued a point for Mikel Arteta’s side which sunk Vieira to his knees, but it was still a spirited performance from the Eagles.

Patrick Vieira took over at Crystal Palace during the summer (Image: GETTY)

Although Vieira could not one over his former side on the night, the match-up highlighted that he did one-up them in the transfer market by snapping up Edouard.

The 23-year-old has hit the ground running in south London, bagging three goals in five Premier League games so far, even with some of those appearances coming off the bench.

Indeed, the youngster had already been lashing in goals at Celtic for many years, but making the transition to the Premier League does not always go smoothly.

At just £15million he already looks fantastic value for money, while the Gunners had to rely on an ageing, more expensive set of strikers to bail them out on Monday.

For one, he is working under the tutelage of a former Gunners captain in Vieira.

The Frenchman also has links with fan-favourite Kieran Tierney thanks to their time together at Celtic, meaning the temptation to play together again may weigh on his mind.

“I had the chance to play with him for two years and I enjoyed it. He makes a big impact on the left-hand side. He gave me a lot of assists so it was good.”