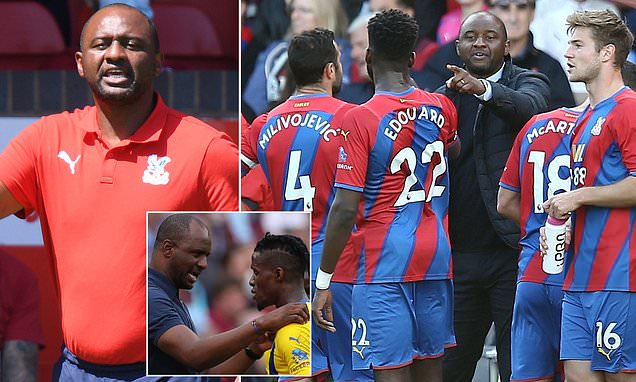 Patrick Vieira's significant contribution to Arsenal was not enough to earn him a post-retirement return to the club he served with such distinction for nine years and one he had hoped to finish his career at.

‘I've never been contacted by anyone to manage or get involved with the club,’ Vieira once said. ‘I was expecting something from them, but it didn't come.’

But it has helped him gain a respect that has provided the foundation for the managerial career he has built elsewhere – at New York City FC, Nice and now Crystal Palace, achieving one of his big aims to manage in the Premier League in the process.

Vieira conquered England with Arsenal and Europe and the world with France being integral to club and country and captaining both.


‘When I hired him in 1996, I thought it was possible he might become a great player,’ Arsene Wenger said in the autobiography of his 2004 Invincibles captain Vieira who remains in touch with a number of his teammates from that unforgettable side.

‘By the time he left [for Juventus in 2005] he had become one of the greatest players in the club’s history.’

‘When he walks in the dressing room, all of his background comes with him,’ Vieira’s former Nice CEO Gauthier Ganaye told Sportsmail. ‘He is a piece of history.’

Eagles attacking midfielder Ebere Eze said: ‘The first time I walked in and saw him, I felt something inside me that made me sit up. I was thinking: “This isn’t supposed to happen. He’s a human being just like me!” I don’t think I’ve had that speaking to anybody. But there’s a presence about him.’

The instant respect Vieira commands, and which is referenced by many, has given the 45 year-old a platform to build on during his early weeks at Palace.

‘He’s not had to scream and shout but everyone knows, don’t f*** about,’ one source explained. ‘If he says something, you listen.’

With his players’ attention instantly gained, Vieira has had room to make the sort of adjustments that in different circumstances could cause a bigger fuss, such as double sessions, longer days and cut back days off where required.

Further buy-in has come thanks to his squad taking to his methods. He communicates well, his players understand what he is trying to do and there is a big will at Palace for him to succeed.

Vieira has impressed his players on the training ground as have the coaches he has brought in Osian Roberts, Kristian Wilson, Said Aigoun and Shaun Derry.

Then there is his manner. Having seen and done it all Vieira has high expectations of himself and his colleagues.

Along with the courage to make any decision to improve his team without thinking twice ‘he has no problem to call on even the top player in the team, to have a go at them,’ said now KV Oostende president Ganaye.

‘He has been part of some of the best teams ever, great football clubs and played with some of the best players in the world. He has seen best practices and is never impressed which is good.

‘Then because he has been in top clubs he will pay attention to everything, every detail.’

But there is also a warmth and calm to Vieira the manager.

‘He puts you at ease straight away,’ said Ganaye, who was just 30 when he arrived at Nice to work with Vieira. ‘He respects your position and the relationship.’

‘With a character like him, his background you could think “woah, this is going to be challenging” but the first memory I have is us meeting and him just being very honest, very, very simple. Down to earth. So far from the image you can maybe have of him.’

As Palace prepared for life after Roy Hodgson there were some concerns about there being both a new, young manager in the dugout and new, younger team on the pitch.

Vieira - turned to after Lucien Favre and Nuno Espirito Santo strung Palace along - may lack Premier League experience as a manager but the amount he had as a player meant he was sufficiently informed.

Being younger has also helped the process of him connecting with his players.

It is a dynamic that has been especially welcomed by some in the squad and Palace have provided glimpses of on social media, releasing clips of Vieira joking with his players about their ratings in the latest FIFA game and being at the heart of light-hearted punishment when training drills go wrong.

Vieira has also endeared himself around the club by taking in youth team games, keeping an eye out for youngsters who could be worthy of inclusion in his first-team plans.

Defender Joachim Andersen told Sportsmail last month: ‘He is a really, really good guy. I’d say a joker. He wants to be close to his players.

‘In Italy and France there was a distance from the manager. I like that you can talk with the manager, joke around. To build the relationship is nice.'

In the new-look Palace Vieira is building, teammates have been raving about centre backs Andersen and Marc Guehi who have allowed Palace to play higher and keep possession better.

Loanee Conor Gallagher has been an early standout performer. Odsonne Edouard and Michael Olise’s goals off the bench have shown Vieira’s ability to make game-changing interventions.

As the comebacks against West Ham and Leicester illustrate, Palace have retained their trademark spirit and grit under Vieira. But he is trying to evolve them too.

Having played under Wenger, Jose Mourinho and been privy to Pep Guardiola’s methods it is no surprise Vieira likes his team to control games, have the possession but also display ‘a big organisation defensively’ though he is not being unrealistic with his demands on Palace and nor does he want them passing for the sake of it.

He wants them to attack and seven league games in, they have had more shots, possession and touches in the opponents’ box, made more passes and regained the ball in the final third more often per game than last season.

Vieira still has the exciting Eze to add to the mix when he returns from injury too.

‘You can’t underestimate the job that Roy did in the situation we were in,’ chairman Steve Parish told Palace podcast HLTCO. ‘The financial restraints, Covid … it’s an incredible, incredible job he did for us.

‘Without being in anyway disrespectful to what went before at the moment it’s a little bit more enjoyable, watching that kind of football. Whether it gets you results, remains to be seen.’

Ganaye described how Vieira’s focus is on ‘the content’ of a performance knowing the result will come if his team get the details right.

And so far, the positivity from players, fans and within the club, stems from Palace’s encouraging performances, which have been worthy of at least four more points, as much as results.

But Vieira will need no telling that, ultimately, it is victories that will really make the difference for him or any manager.

Knowing what it takes to secure them in the Premier League is something else he will have gained from his illustrious Arsenal career.