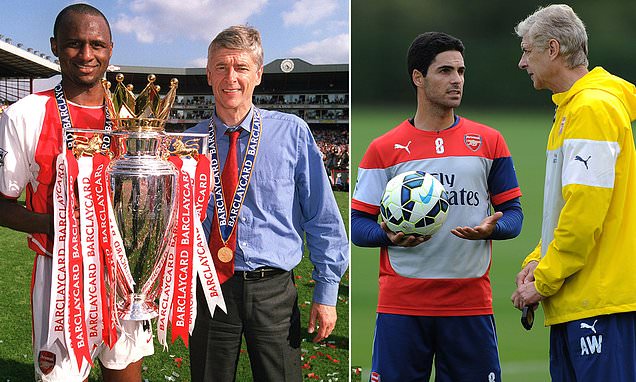 Now respective managers of Arsenal and Crystal Palace, the one-time midfield rivals are also joined at the hip in admiration for their coaching guru Arsene Wenger.

'I think we were all guided and felt a different way about the game because we had Arsene as a manager,' Arteta revealed.

'He started a fire in us to be a coach. Not only me or Patrick, but many others, with his way of treating everybody at the club and how he felt about the game.'


Last week marked the 25th anniversary since Wenger started his French takeover of English football, with Vieira a young heartbeat in his evolving Highbury heroes.

Now, 45, Vieira won two Doubles, captained the 2004 Invincibles and scored the winning penalty to claim his fourth FA Cup with the final kick of his nine-year Arsenal career.

Although he does not claim to owe his managerial spark to Wenger, one senses he is closer to his fellow French countryman these days.

He explained he was convinced of his coaching capabilities at his final club Manchester City, by executives Gary Cook and Brian Marwood, but Wenger remains a uniquely inspirational figure in his footballing life.

'Our relationship is still really good,' Vieira added. 'We keep in touch. He has been watching games and he is always there if I need him.'

Vieira laughed at the suggestion Wenger will brave a first return to the Emirates stadium since his 2018 departure to watch his protegees in action, but emanated a warm glow when he recalled their time together.

He added: 'Twenty five years ago, I arrived in a country I did not know a lot about. But I believe both of us came to the right place at right time because we managed to be successful straight away.

'When I was 20 and working with Arsene he gave me the confidence I needed to express myself.

'He made me grow as a person and understand how learning from my mistakes would make me a better player and a better person.'

But he insisted that, and the fact he has never been offered a senior coaching role at Arsenal, should represent a disconnect with the club.

'I don’t think the connection stopped,' he claimed.

'This is something that is always going to be part of me because it was nine years, and nine years when I was part of a generation who had success.

'Nobody can write that off. That is always going to be part of who I am as a manager now, who I was as a player and who I am as a person.'

Those characteristics are making him an instant hit as Roy Hodgson's successor at Palace, while Arteta is finally hearing his name chanted by the Arsenal faithful amid a run of five games without defeat.

The Spaniard's ultimate challenge, however, is to restore Arsenal to the pinnacle of the English game, rarefied air they have not enjoyed since Vieira's captaincy 17 years ago.

'Hopefully not [another 17 years] as it’s been a long, long time,' Arteta conceded before reflecting how Vieira was soon followed out of N5 by senior players such as Thierry Henry, Bergkamp and Robert Pires.

'You’re talking about some of the best players in the world in their own positions at that time.

'To replace that is almost impossible, the chemistry and understanding that the team had, and how long they had worked together.

'That was an era which started to disappear because some of the participants who were so important to that success began to leave.

'We have the example of Liverpool and how long they went without a Premier League - and that it’s achievable and is doable.

'I’m always positive to think that there are different ways to do it and you can still become what you are dreaming of.'