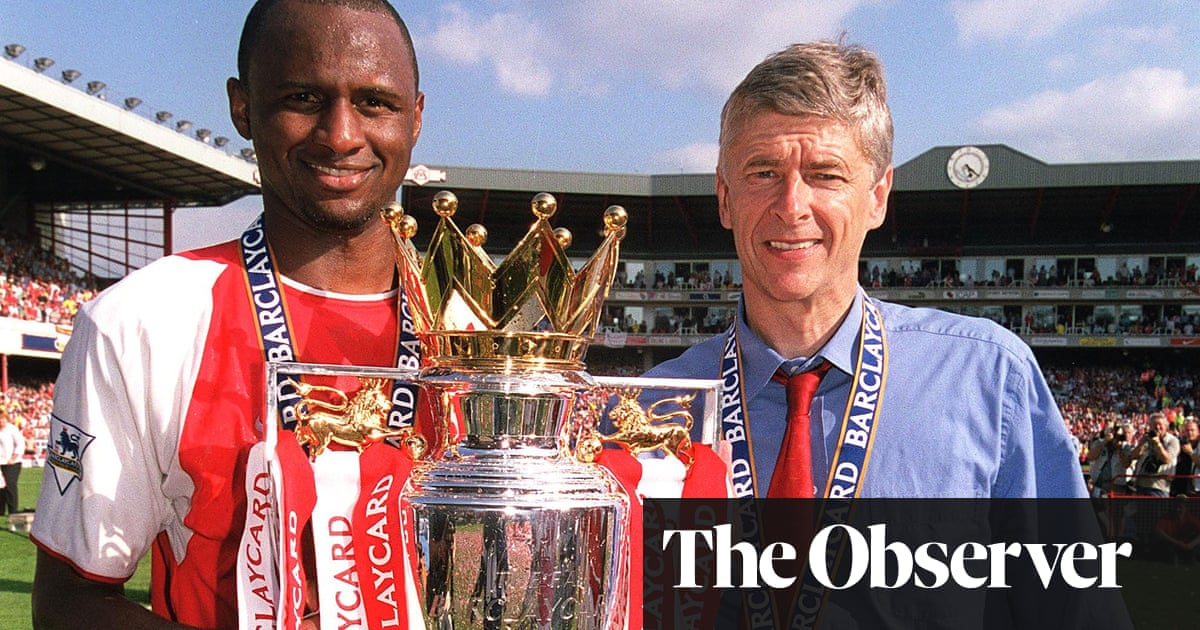 Patrick Vieira has paid tribute to the man who inspired him to become a manager, but said it was not Arsène Wenger.

This week marked the 25th anniversary of Wenger’s first game in charge of Arsenal, a 2-0 victory over Blackburn that featured Vieira, who had made his debut for the club a few weeks earlier after Wenger told Arsenal to sign the young Frenchman from Milan. The former midfielder takes his Crystal Palace side to face his old club on Monday night at the Emirates.

Despite his long association with Wenger, having spent nine years in north London and winning three Premier League titles, Vieira surprisingly credited the former Arsenal winger Brian Marwood for handing him an opportunity to join the coaching staff when he was at Manchester City.

‘It will be emotional’: Patrick Vieira relishing return to Arsenal

“Not really,” Vieira said when asked if it had been Wenger’s influence that persuaded him to move into coaching. “When I was 20 and working with Arsène he gave me that confidence I needed to express myself and he made me grow as a person as well. He made me understand the mistakes I was making.

“But wanting to go into coaching – that came later when I was at City. They made me understand that I had a lot to give back to football. And Brian Marwood was fantastic. If I really have somebody to thank for the journey so far it would be him.”

Vieira said he still has a good relationship with Wenger and his former manager has been watching some of Palace’s games this season. “His phone is always there if I need him. When we arrived in England, both of us were in the right place at the right time because we managed to be successful straight away.

“The foundation of the team was there already with the back five and they played a big part in my development and making me feel at home immediately. It will always be a special place for me.”

While his Invincibles teammates Thierry Henry and Freddie Ljungberg are among the former players to have begun their coaching careers under Wenger at Arsenal, Vieira chose a different path, at City, after five years in Italy with Juventus and Internazionale.

“I don’t know – that is a question you should ask them,” he said of never having been invited back by Arsenal.

“When I decided to move into that journey of becoming a manager there are options and choices and you just follow your route. Today that journey has taken me to Crystal Palace and I’m very grateful to have been given the opportunity.”